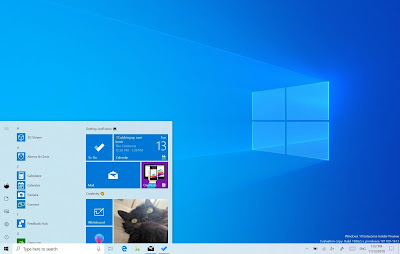 Windows 10 Version v.2004 (20H1). In December, Microsoft completed feature development of Windows 10 Version 2004 and Build 19041 is the RTM. Nearly four months after Microsoft signed off the RTM candidate, Microsoft keeps updating the May 2020 Update with bug and security fixes.
Microsoft is rolling out 6th cumulative update for Windows 10 version 2004 and it comes with a set of bug fixes. All these fixes will be bundled and released together with the final version of May 2020 Update next month.
Windows 10 Build 19041.173 is available for testers in the Slow Ring and it comes with the following fixes:
Microsoft says it has resolved a bug that could prevent certain old apps from opening. Users were directed to install the new version of these apps in order to access the features.
A bug where USB mass storage devices would stop working has been fixed.
Microsoft’s Your Phone app will no longer prevent users from using the mute button.
Microsoft has fixed another bug that causes a fault in IOMMU and a DRIVER_VERIFIER_DMA_VIOLATION error.
For devices with the mobile broadband feature, Microsoft is updating Country and Operator Settings Asset (COSA) to increase the coverage for automatic cellular.
Microsoft has yet to move May 2020 Update into the Release Preview ring, which would be the final major milestone.

Download
May 2020 Update is expected to bring in a whole lot of fresh features and performance refinements. For example, this update will finally allow you to create custom names for each virtual desktop.
Virtual Desktop
Virtual Desktop lets you create multiple desktops
Currently, virtual desktops have numbered names: Desktop 1, Desktop 2, Desktop 3, and so on. If you use virtual desktop, you’ll be able to make sure each desktop is clearly labelled for the associated project.
The 20H1 update brings improved password-less experience as well. In this release, Microsoft is letting users rely on Windows Hello or fingerprints for signing into your Microsoft account.
If you use Windows Hello or fingerprint on your device, you’ll be able to sign in to your Microsoft account and services with it.
Windows 10 20H1 will also add Windows Display Driver Model (WDDM) 2.7 to improve refresh rate on multi-monitor setups, gaming performance, and video playback.
Download now