This gaming laptop has two screens, but arethey actually useful? This is the ASUS Zephyrus Duo 15, a powerfulmachine with some unique features, I’ll tell you everything you need to know aboutit in this detailed review. I’m testing the highest specced configurationhere, but the Duo 15 is available with some different specs, you can see examples andcheck updated prices with the links in the description. What makes the Duo 15 unique is that it hastwo screens, now ASUS have done this before on the ZenBook Pro Duo, but this time thebottom screen automatically tilts up by 13 degrees when you open the laptop, giving youa better viewing angle. The main panel up top is a 15.6” 1080p 300Hzpanel with G-Sync, so good gaming panel specs, but no touch screen. The screen below, which they call screenpadplus, is a 14.1” touch screen. We’re given the option to swap between Optimusor discrete GPU only through software, and this requires a reboot to complete, no advancedoptimus here. The second screen is just seen by Windowsas another display below the first one, just like dual monitors. This means you can simply drag whatever windowsyou like to the second screen. 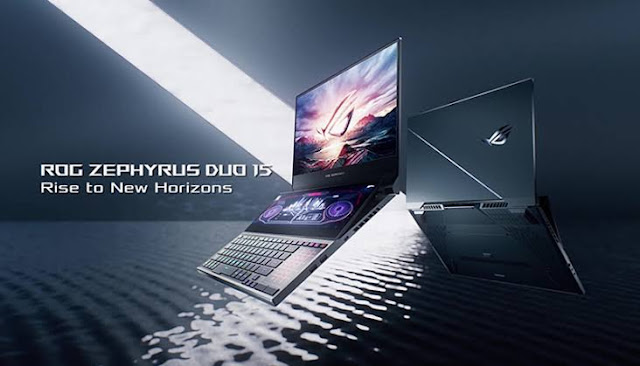 The installed Screen Xpert software furtheraids this by offering shortcuts which appear when you start moving a window. These allow you to quickly move a window tothe opposite screen, pin an app to the screenpad shortcuts to easily open later, or make theapp go full screen over both screens. Otherwise there’s an arrow icon you canpress to bring up all the screenpad options. From in here, you can set program shortcuts,change brightness, swap windows between the two screens, show the apps currently on thebottom screen, and optionally disable the keyboard which may be useful for resting yourpalm on the keyboard to draw. Game support will vary, by default runninga game in full screen mode won’t let you easily move the mouse into the second screenso you’ll need to use something else like borderless mode, otherwise clicking out ofthe window will be similar to an alt tab. Basically like I mentioned in the ZenBookPro Duo review, if the game doesn’t let you have separate Windows then it might lookweird just setting it to use both screens. Somes games like dying light 2 will apparentlyhave support for it, but I don’t have that currently, otherwise your best bet is to usethe second screen for other apps like chat. Other workloads like streaming would alsosee a benefit as you can just see more things at once with a game taking up the main display. Outside of gaming, for things like video editingsoftware you can arrange it quite nicely. The resolution of the screenpad is quite high,however by default it runs lower so that it properly aligns with the top screen in Windows,but this would be less of an issue if you got the 4K screen option. I’ve tested the screens with the Spyder5, and for the main panel got 98% of sRGB, 76% of AdobeRGB and DCI-P3, and 70% of NTSC. The results for the screenpad were actuallya little better in terms of colour gamut. The main panel got to 282 nits at 100% brightness,so not quite the 300 or so I’d like to see but not too far off, meanwhile the bottomscreen was brighter. The optional 4K screen apparently has 100%of AdobeRGB, so could be worth considering for creators. The main panel has overdrive enabled by default,and I measured a 3.8ms grey-to-grey response time, and it’s one of the better resultswhen we look at how it compares against other laptops. ASUS do give us the option of disabling overdrive,which removes overshoot and undershoot, though this boosts the response time up to 7.2ms. Not that I expect anyone to do serious gamingon the smaller second screen, but we’re looking at a 19ms response time there. 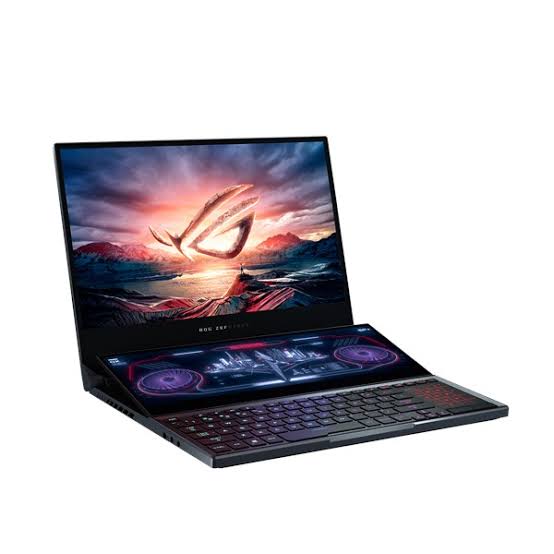 Now I did see some strange behaviour withoverdrive enabled in optimus mode, many of the transitions were the same as having overdrivediabled. Basically it seemed like overdrive was onlyrandomly working. I think this is a bug which will hopefullybe fixed, but using overdrive mode with optimus disabled worked fine, and this is how you’dwant to play for best performance anyway. When looking for backlight bleed in this worstcase it looked a bit patchy, but I never noticed this during normal use, though it will varybetween panels. That’s a lot of information on the screens,let’s check out the rest. The lid has a clean metal finish with mirroredROG logo. The interior is also metal around the keyboard,and overall the build quality feels quite decent, no sharp corners or edges anywhere. The weight is listed at 2.4kg, though minewas 2.5kg. With the 240 watt power brick and cables forcharging included we’re looking at almost 3.3kg or 7.2lb. The Duo 15 isn’t too big for a 15 inch gaminglaptop, especially considering the specs that it’s packing inside. We’re looking at 9mm screen bezels on thesides, though the bottom chin is larger. There was some screen flex when intentionallypushing it, but it seemed minor and was never noticeable during normal use.

The screenpad was quite sturdy, I tried pushingdown harder than you ever normally would and it was quite solid towards the edges, justa little flex in the center, which makes sense as the metal poles holding it up are out towardsthe edges. No problems opening it up with one finger,it did feel more back heavy but stable on my lap. Like some other recent laptops from ASUS,there’s no camera built in. Although there’s no camera, it does stillhave microphones, and this is what they sound like. In order to have the second screen, the keyboardis right down the front of the machine. ASUS have done this with other Zephyrus laptopsin the past, and I think it’s fine so long as you have the desk space as you need toput the machine back a bit further to type normally, though doing so does mean the screenis a bit further away too. It comes with an optional wrist rest as well. If you use it on your lap, it can feel a bitawkward unless you push it further back, otherwise you end up needing to hold your arms too farback to type. The chiclet keyboard has per key RGB backlightingwhich unfortunately does not illuminate everything, the function keys are only partially lit whichI did find annoying at times. There are three levels of key brightness whichcan either be adjusted with the function and arrow keys, or through the included Aura Creatorsoftware. I didn’t have any issues typing with it,it’s got 1.4mm of key travel and I’ll give you a listen to how it sounds to getan idea of what to expect. Due to the keyboard placement, the precisiontouchpad has been crammed over to the right. You can hold the top left corner to activenumpad mode, but unfortunately unlike other laptops from ASUS, in this mode you’re notable to use it as a touchpad until you disable it. As it doesn’t physically press down, thereare instead two left and right click buttons underneath, and after some use you do getused to it, but I’d definitely stick to a mouse where possible. The buttons above the touchpad from left toright are shortcuts to open the ASUS Armour crate software to manage the system, a buttonto turn the bottom screen on or off, a button to turn the arrow keys into page up/down/home/endkeys, and the power button. Fingerprints show up on the lid but aren’tsuper obvious, however they were a little hard to clean with a microfiber cloth. Inside we only really see them on the touchscreen,but that was easy to clean. On the left from the back there’s an airexhaust vent, then closer to the front the power input, and 3.5mm mic and headphone jacks. I didn’t have an issue with the power cablebeing closer to the front, it didn’t block any I/O or vents. On the right from the front we’ve got twoUSB 3.2 Gen1 Type-A ports, USB 3.2 Gen2 Type-C port with DisplayPort 1.4 and Thunderbolt3 support, followed by another air exhaust. The back has more air exhausts towards thecorners, then from left to right, gigabit ethernet facing the preferred way, USB 3.2Gen2 Type-A port, and HDMI 2.0b output. The front is clean and just has a groove forgetting your finger into. I confirmed that both the HDMI and Type-CDisplayPort outputs were connected directly to the Nvidia graphics, which makes sensegiven we can disable Optimus anyway. Underneath there are some air intake ventsabove the fans towards the back. I also noticed that the rear feet were a bittaller when compared to others, so that should help airflow. Getting inside was easy, you remove 14 TR5screws of same length, then there’s a single phillips head screw down the front right whichdoes not remove and props the base panel up. Inside we’ve got the battery down the bottomand two M.2 slots next to that, WiFi 6 is soldered and cannot be upgraded. There’s 16gb of memory soldered to the motherboardtoo, but as long as you have a stick installed in the single slot like I have here, it willrun in dual channel. You can install a 32gb stick for a total of48gb. Interestingly this is the first Intel 10thgen laptop I’ve tested that runs the memory at DDR4-3200 speed. The two four watt speakers are found towardsthe front to the left and right. They sounded ok with a little bass, nothingimpressive, but they sounded way louder to me in person than what I was measuring atmaximum, and the latencymon results were looking good. Speaking of sounds, by default it plays thisone on boot. Fortunately you can disable it through softwareor the BIOS. The Duo 15 is powered by a 90Wh battery. When you unplug, the screen fill briefly goblack while it automatically changes the refresh rate from 300Hz down to 60Hz, which will helpimprove battery life. I’ve tested with the screen brightness at50%, background apps disabled and RGB lighting off. I’ve tested a few different configurations,with and without optimus, and with and without the second screen. As you’d expect, the battery drains quickerwith both screens in use, or far quicker without optimus. Here’s how it stacks up when compared toother laptops, and I’m comparing with both screens on as that’s likely how people buyingthis machine will probably use it. The Duo 15 also supports Type-C charging,so you can use a smaller power source or battery when travelling instead of the larger andheavier 240 watt brick, just don’t expect full performance in resource heavy workloads. Let’s check out thermals next, this willbe more of a summary as I’ve got a full detailed video covering thermal performancelinked in the description.

The Armoury Crate software lets you selectbetween different performance modes, which from lowest to highest are silent, performanceand turbo. There’s also manual mode which is requiredif you want to set the fans to maximum speed, and it also applies a GPU overclock too. Any time I’ve tested in manual mode, I’musing full fan speed. As my model has an unlocked HK processor,undervolting is possible. Thermals were tested with a 21 degree Celsiusambient room temperature. Idle results down the bottom were ok. Worst case stress tests were done with theAida64 CPU stress test with CPU only checked and the Heaven benchmark at the same time,while gaming was done with Watch Dogs 2. The temperatures were actually very good giventhe specs at stock and remained under 90 degrees. I only saw thermal throttling on the CPU at95 degrees if we manually modify the power limit to get some extra performance, so theseworst case results don’t represent out of the box behaviour, consider them more inlinewith an enthusiast modification. Looking at the clock speeds though we getquite a nice boost to processor performance by raising that power limit, so you’ve gotthe choice of running hotter for more performance, or running a bit slower to maintain a coolermachine.