When gaming hardware companies try to makeheadphones, more often than not, it doesn’t go right, but today we’re going to checkout the ROG Strix GO 2.4 Wireless Gaming headphone from Asus, and it really offers some featuresthat I have not seen before, along with some really good decisions about the design andfunctionality of the headphone.  we’re going to talk about that. Opening the box you get greeted by this welcomecard which shines in multiple colors, then we get to some manuals, and then we get tothis nice and hard carrying case which feels very high quality. It also comes with a pocket on back whichcan be handy. Inside we get this braided 3.5mm cable, becauseyou can also use this in wired mode. Then we get a USB cable for charging, thedetachable microphone, a USB A to USB C adapter, you get the receiver for the headphone whichwe will talk about later, and finally we get to the headphones. 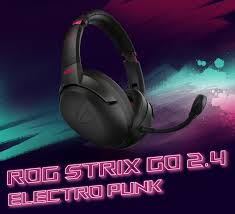 I have the electro punk version of these headphones,so it has these pink accents and translucent plastic. But the regular version comes in the usualblack colour. The ROG Strix GO has won an IF design award,and it is easy to see why. This is one of the most well thought out designsthat I have seen in a wireless headphone. Every part of this headphone’s design isjust so good that you wouldn’t think this wasn’t made by a proper headphone brand. The headband cushion is really nice, the earcupsswivel to 90 degrees so you can rest them on your chest while not using them, the earpadsare very soft and they have a really amazing shape with these long earcups that are verycomfortable while still being compact because the human ear is shaped like that. You really have to look closely to realizewhat a level of attention to detail is on this headphone, the clicky metal headbandadjustment has ROG logo printed on it, and even the earcups have rubber pads in the placesthey make contact with the headband. The subtle ROG logos on the earcups also integratewell with the aesthetics without overdoing it. Next to the power switch on the headphone,you have a multifunction button which you can use to play pause and change tracks, andthen you have the volume rocker, and you have to hold it up or down to increase or decreasevolume and if you press it inside, it will mute the mic. A dedicated button to mute the mic would havebeen better, but this system also works fine.

The comfort is good with the nicely shapedearpads that also have very nice memory foam, but it can get a little hot because of howairtight of a seal it forms around your ears. A character that I frequently observe in headphoneswith pleather pads and memory foam. The earpads on these also don’t seem removable,and I am not going to make a big deal out of this because most gaming headsets don’thave removable earpads, but every premium headphone should have removable earpads, whetherit is meant for gaming or not. As the name suggests, the Strix Go 2.4 workswith a 2.4 GHz wireless connection, and it comes with this USB Type C dongle that youwill have to connect with whatever you want to use this with. The advantage of this is that unlike somethingwith a Bluetooth connection, you won’t be facing any latency issues, which is criticalfor gaming, and because it has a USB type C port, you can use this with your PC, laptop,Nintendo switch, your phones, and even with iPhones and iPads if you are okay with livinga dongle life. People have been asking me for a wirelessheadset to use for PUBG Mobile for a long time, so this will be really good. You can of course use it in a wired mode byplugging the cable in, and this headphone also comes in a wired version. The microphones on this are a very big highlight,and I say microphones, because there are actually 2 of them. So you do have a detachable boom mic, whichis easily adjustable, but you may often forget to have it plugged in, or you might be usingthis with your phone without having it plugged, so for that Asus has included an in builtmicrophone which is a really amazing idea, and this is how the inbuilt microphone onthe headphone sounds like, and it sounds pretty good for an in-built microphone. But the boom mic on these headphones is veryextraordinary because it includes Asus AI Noise cancellation, and when I first heardabout it, I just thought it was a gimmick, because brands just keep adding AI to everythingthey release, but I was really blown away by how well it works when I tried it. 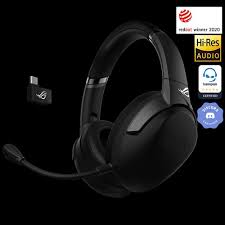 So this is what the boom microphone soundslike and you can hear that it sounds pretty decent, but now I will play music on my phoneat full volume and you can hear with the lav mic how loud the phone is. But now I have switched to the mic on theROG Strix Go, and I think you must be able to hear how well it is rejecting the noisefrom such a loud source that’s close to it. The inbuilt mic doesn’t reject sound aswell as this because it has to pick up your voice from a distance. So for regular kinds of noises that you havearound, this should work extremely well, and suppose you’re in a gaming cafe where manypeople are shouting, this should be able to reject that noise well which is kind of abig deal. By the way, make sure that you’re subscribedto the channel with bell icon so you don’t miss out on future videos. The battery life on these is around 25 hours,and they also work if you keep them plugged in with a charger while using them, and theyalso support fast charging with 15 minutes of charge providing 3 hours, so you reallyshould not face any issues with the battery life. Coming to sound quality, I think this is avery capable gaming headset. The soundstage and imaging on these is nicerthan the lower priced gaming headsets that I have tried, and you do feel a very goodsense of movement when things go from left to right, or when there is action going onon a distance in a game. But these have a very treble emphasized soundsignature, and it’s almost like they just pushed the treble frequencies up by 4 or 5decibels. So for music and general non gaming use, Ireally didn’t like these at all. If you listen to electronic music that istreble heavy on these, then your ears will probably start hurting. They do have high quality drivers, so evenwith the emphasized treble you don’t feel a sense of piercing sound on your eardrums,but the boost in treble is so high that you do feel the pressure of the higher frequencieson your eardrums, and it is not a comfortable feeling. You can tone it down by using similar equalizersettings like these, and you can see that I have to reduce the treble by 4 or 6 decibels,and then it manages to sound decent for music, but even then I wasn’t able to make it soundright. One quality I noticed is that even thoughthe treble is boosted, the gunshots sound tolerable, but if you are playing somethingthat has a lot going on in the high end, then you could find it to be fatiguing. If you are a bass head then these will definitelynot be for you. Even for people who like balanced bass, Ithink these do lack them by a decibel or two. This is also an issue that I wasn’t ableto correct with equalizer. So while I think that these should be goodfor gaming, especially for people who like a treble heavy sound signature because ithelps them in hearing the footsteps more easily, I don’t think that they will be great forgeneral media consumption. I also asked this question in audiophile groupsthat I am a member of, and most people did share similar thoughts as me on this subjectof what kind of sound signature is better for gaming.

But I also had very vocal responses from somepeople who said that they like treble emphasized headphones for gaming, and some said thatthey find high treble headphones to provide better clarity in footsteps and voices, soyou will have to know what you want, and you could also let me know in the comments sectionabout what kind of sound signature you like for gaming. In conclusion, I have slightly mixed feelingsabout this headphone. I totally love how well made it is, the attentionto details that it has, I like how it looks, the microphone works extremely well and thesecond internal microphone is just a genius idea. Battery life is great, comfort is great, andit is just a headphone that has been executed very well. These cost around 200 US Dollars, and I thinkthese do have enough technology and quality to justify the price. The sound is something that I do not agreeon as a person who mostly reviews audiophile gear, I have gamer friends who also sharesimilar thoughts about how gaming headphones should sound like, but there are people whodo like this high treble sound signature, and for those people these are really goingto be the best gaming headphones in this range. But if you like a balanced sound in a headphone,or if you want to enjoy the strong bass lines in music or in movies, then these are notgoing to be the ones for you, these are strictly meant to be used as gaming headsets only. Generally I don’t care a lot about a productif it has a character that I don’t like, but this particular headphone just does everythingelse so well, that I do feel a little sad that the sound signature is not more versatile. Non removable earpads at this price ping arealso not a good thing.