The Hisense 43 A71F from their new A71 serieshas a 43 inch 4K panel in addition to having really good hardware and software features,and it supports HDR, Dolby Vision and Dolby Atomos, and all these numbers and featuresare something that I really wasn’t expecting to see on paper for a price point of just24,990 Rs. But we’ll have to check how well it performsin the real world, because on paper it really looks like a deal that is too good to be true,and there’s really a lot to cover in this video, because this TV offers a lot more featuresthan I was prepared to cover. 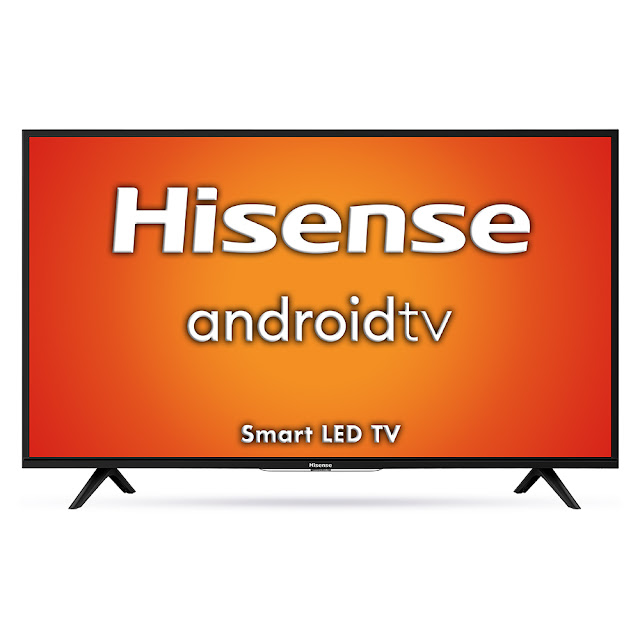 The design of the TV is pretty good, it doeshave thin bezels which make it look nice, and while the rest of the design elementsare pretty standard in this range, the clever integration of the body with the display paneldoes make it look modern. On the left side, you have easy access tomost of the ports, so you have an optical out port for audio, a port for internet viaethernet cable, 3 USB 2.0 ports, with one of them supporting HDMI ARC, and then a 3.5mmjack for headphone or speakers, and finally the antenna port for a cable connection ifyou have that. The component ports are on the back side ofthe panel, so they won’t be very easy to access if you have it mounted on a wall, butI am guessing most people won’t need to use this. You also have a physical button under theTV which you can use to power it on or off, or for switching the inputs.

Coming to the display quality, I am 100% satisfiedwith it, but first we will discuss what makes it so perfect. So you have different color profiles thatyou typically see on the TVs, and the profiles like Dynamic, and even Standard are kind oftoo saturated for my taste, but what surprised me was that they have also included a calibratedcolor profile, and when you select it, the colors do look very accurate, and balanced,and you can go a step further and tweak the contrast, saturation, and adjust the colortemperature, so I boost the blue channel a bit to make it cooler, and then I finallyreach to a look that I find to be perfect. This is such an important feature to havefor people who don’t like the oversaturated look that TVs generally have, and I reallyappreciate the fact that they offer such an advanced and granular control over these settings. So the colors are just perfectly saturatedfor me, and on a hardware level, the panel is also very capable, the contrast is surprisinglygood, the viewing angles are also great, and you’re not going to see any color or contrastshift while being off center.

The backlight uniformity is also really good,and you’re not going to notice any unevenness with video content on this TV. If I had to nitpick, I’d mention that thereis a visible gap between the backlight and the display panel if you get really closeand look at an angle, but this isn’t visible even on close viewing distances, except fora thin line at one edge that you might notice if you view it at an angle. The display has an almost glossy coating whichis slightly matt, if you wanted to know about that. It is a 43 inch panel, and 4K resolution isvery high for a panel of this size. You might think you would need a bigger panelto enjoy 4K, but you can also just move closer to it to fill your field of vision and evenfrom a distance 4K looks way better. Not all content is available in 4K, so 1080pis also going to look really great on a panel of this size. I will also mention the price of bigger sizedpanels in this series later on. They also have a UHD upscaler, smooth motionoption for sports, and some noise reduction features, but the more important part is thatthe raw performance of this panel is good. HDR SUPPORT This TV also supports HDR, HDR10+, HLG Decoding,and Dolby Vision, which I don’t think other TVs have in this range. We don’t have any kind of local dimming onthe panel, and this isn’t an OLED, so you’re not going to have the same HDR experienceas the super expensive 2 lakh Rs. 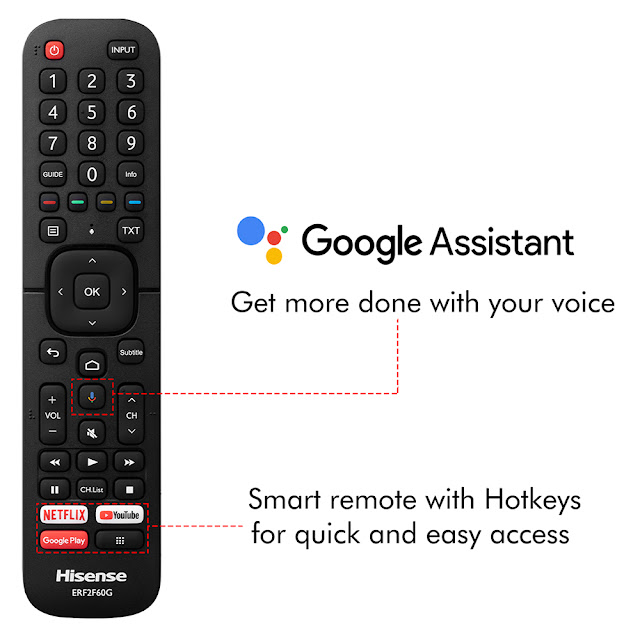 TVs, but I tested different HDR content onit, and it looks pretty good, and even without local dimming, the contrast is very good. They have some software algorithm that adjuststhe contrast curves for HDR, so that seems to be working well. So you are going to get good compatibilitywith HDR titles, and even games, so that is nice. GAME MODE Speaking of games, one of the things thatmakes TVs less suitable for gaming with a playstation or PC compared to monitors istheir input lag, which is the latency between a computer sending the frame to the TV throughHDMI, and the TV actually displaying it. TVs generally have high input lag, which createsa difference between you pressing a button in the game and the action appearing on thescreen. This TV has a game mode, and even withoutactivating it, this TV has very low input lag, but on game mode, its performance ison a totally another level. I tested it with a duplicated display withmy 4K monitor, and the performance in gaming was really outstanding as it felt that thegunshots were instantly activating with my mouseclick, but then I recorded it at 120fps slow motion with my camera, and what I found was that the TV actually had slightlylower input lag than my monitor. Now this is not a gaming monitor, but thefact that a TV in this price range can beat a regular monitor is really surprising, andmy mind was totally blown away by this. Also keep in mind that this is with a 4K 60HzRGB signal which is uncompressed. So if you’re looking for a TV to use withyour playstation, Xbox, or PC, this will really be perfect for that purpose, and you can evenplay FPS games on it without a problem. Also make sure that you’re subscribed to thechannel with bell icon, because I have some really exciting PC content coming up thismonth. The remote was another pleasant surprise onthis TV, unlike the minimalist approach by some other brands here, this remote has manybuttons that are actually useful, so you won’t have to get frustrated trying to do everythingwith 3 or 4 buttons, and the bigger size also fits in the hands better. 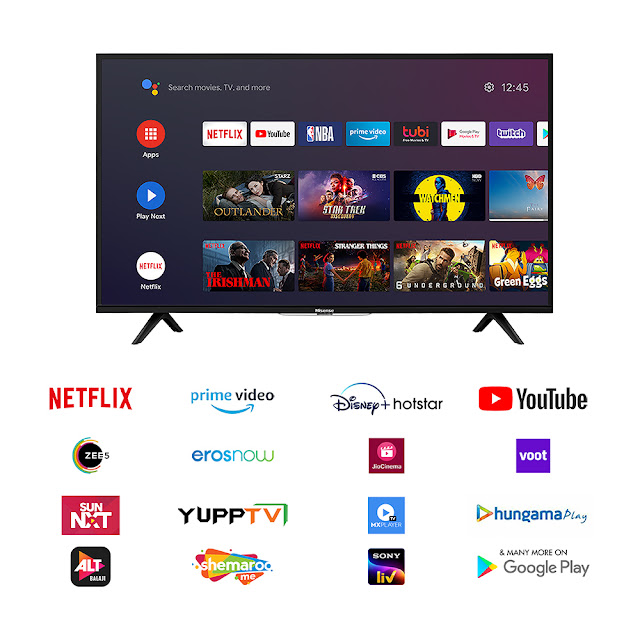 Not only do we have dedicated buttons forNetflix and Amazon prime, but we also have them for Hotstar and YouTube, which I reallyliked, and finally we also have a dedicated button for switching inputs, which is extremelyuseful. In addition to the mute button, the remotealso has a button to turn off the backlight, which is another very useful addition, becauseyou can turn off the display while listening to music or watching podcasts on YouTube. Sending the TV to sleep state also requiresonly a single button press, which is also nice because it will wake up instantly. I think that the remote also has additionalfunctionality to integrate it with a set top box or use it with a cable connection, butI don’t have a cable connection so I couldn’t test that. The TV comes with Android TV 9.0 installed,and that is really great. You have the familiar Android TV interface,which works well, and the nice thing about it is that you have access to all the appsand games in the Google play store, and you can side load any app from the USB, and asI talked about earlier, there are some additional features in the software which I have notseen on other Android TVs before. You also of course have Google Assistant whichyou can access by pressing the dedicated button on remote, and you can use it to do Googleassistant things like quick searches on web, or for finding content on different platforms,and the voice commands are easy to use as the remote has a mic. The TV also has Chromecast built in, so youcan cast online content directly from your phone, and it also has a screen mirroringfeature, which lets you mirror your phone’s screen on the TV. In addition to Netflix, Amazon prime and otherstreaming apps, You can also play content directly from pen drives with VLC player,install browsers to browse websites on TV, amongst other things that are typical forsmart TVs. It also comes with Dual Band Wi Fi, so youcan also connect it to your 5 GHz Wi Fi network which is awesome, and it also comes with Bluetoothwhich I just consider to be critical in a smart TV, so you can use all your Bluetoothspeakers, headphones, use Bluetooth keyboards, mouse, gamepads so they really haven’t skippedon anything to achieve this low price point. Coming to sound quality, it is really goodfor a TV. You have 2 12 Watt speakers, and they getreally loud, with plenty of headroom for videos with low volume. The TV also supports Dolby Atomos, even withthe inbuilt speakers, and it does work well as it improves the sound when you enable it. In addition to great performance by the speakers,you also get very good control over the sound of the TV, so you have settings for a bettersound when TV is wall mounted, and there are different sound profiles, including one foruse with headphones. You also have an equalizer which is nice tosee, and it also has additional features for Lip sync and audio delay adjustments, so youshouldn’t have any issues with audio video sync, which could be very helpful. Overall, you are getting a really great soundexperience, and I don’t think you’ll need to use a sound bar or external speakers ifyou’re only watching movies and tv shows.

The Performance also is pretty good, you havevery adequate horsepower for everything that you’ll do on TV, it has a Quad Core processorthat handles things well and I didn’t face slowdowns while switching between apps. You have 2 GB of RAM on board, which is goodto have in this segment, and 11 GB of available internal storage is also higher than whatI have seen on other devices like Firestick and competing TVs. The Mali 470MP GPU will also allow you toplay 2D games very well, and you can even play some graphic intensive 3D games at lowersettings. The TV can really play every codec you throwat it, so it’ll play VP9 4K 60fps HDR video on YouTube, and so on, so you really don’tneed any other external device like firestick or a TV Box for anything, which is reallygreat. So looking at all the features and performance,the price tag of around 25,000 is really amazing, I really thought that there will be some compromisesin some areas, but this TV has delivered in every area very well, and even exceeded myexpectations with how much control it provides over the hardware and software. The input lag for games being lower than mymonitor was also something I really wasn’t prepared for, especially at this price, andoverall, I really don’t know of any other TVs that come close to it in this price range. Another great news is that the pricing onbigger size versions of this TV is also really amazing, so the 50 inch version is availableat 31,000 Rs., the 55 inch at 35,000 which I think is the sweet spot, then the 58 inchcosts around 38,000, and finally they also have a 70 inch version, which is actuallypretty great to have at just 65 thousand.