The HP Omen 15 is the coolest Ryzen gaminglaptop I’ve tested so far, the results are very impressive, let’s check out thermalsand see what performance improvements can be made. I’ve tested temperatures with AMD’s 8core Ryzen 7 4800H and Nvidia’s GTX 1660 Ti config to find out just how hot it getsand see where the limits lie. Air comes in through the fairly large ventsunderneath towards the back, as we can see on the bottom panel though it’s not fullyopen, but still a fair amount. There also seems to be some sort of ventilationabove the keyboard. Air is then exhausted out of the back corners,and from the rear vent on the right side, there’s no exhaust on the left. There are a couple of fans inside and twoheatpipes shared between the CPU and GPU, and looks like we’ve got full VRM coveragehere. The Omen Command Center software lets youselect between different performance modes, which from lowest to highest are comfort,default and performance, and you have the option of enabling max fan speed with anyof these modes, but there’s no further granular fan controls. 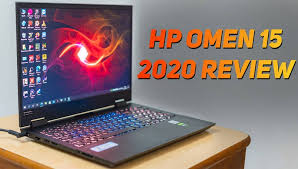