This is the end of an era guys. This will be Apple’s last Intel-based iMac before they transition to thenew design and Apple silicon. So let’s enjoy it.  I’ve been waiting forthis for a long time. I know a lot of you guys have as well. Unfortunately it didn’t get redesigned. There was a lot ofspeculation about a redesign, but that’s okay. I think there’s a reason for that. We’ll talk about thatmore in a little bit. That’s the future, butat this exact moment, let’s talk about the present.

The first new thing I wanna talk about is across the whole 27-inchline, it’s all SSDs. And even with the baseline21 and a half inch model, it doesn’t start with amechanical drive anymore. It’s all SSDs as well. So today on August 4, 2020, finally, finally, no Apple baseline Mac has a mechanical, harddrive in it anymore. Like the previous generation iMac, the 27-inch iMac featuresa 27-inch display, shocker, and it has 1 billion colors. It has that P3 wide color feature as well. But one new thing is it has True Tone. So the color temperatureof the display will adjust based on the ambient lighting in the room like you have on the MacBookPros and the iPad Pros. Another optional featureis nano texture glass. This is a feature that was only on the Pro Display XDR until now. So the nano glass is, asit may suggest, glass, and it’s etched in such a waywhere it has a matte finish, but instead of it just beinga coating on a regular screen, it’s actually etched tohave that matte finish, which helps reduce reflections and glare. And it looks pretty nice, but you’ll have todetermine whether or not you wanna cough up theextra $500 for that, because I think the standarddisplay is more than enough. 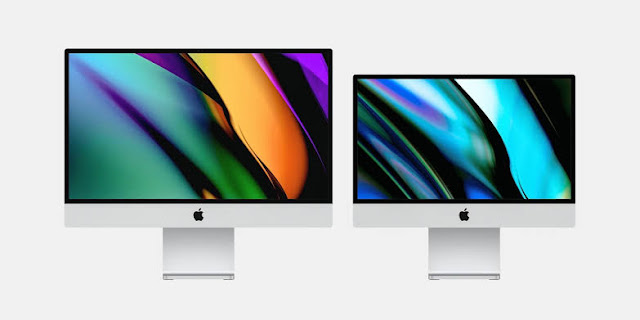 I use an iMac Pro all of the time at a different editinglocation, and it’s great. As long as you have the lighting controlled in the room whereyou have nothing reflecting and shining into your display, the standard display should be just fine. But if you want thenano texture, go for it, I’ll leave it up to you. This next feature is super handy with our luxurious pandemic lifestyle. You’re on video callsand stuff all the time as you’re working from home. The iMac now has a 1080p webcam. That’s just great. Apple isn’t really known for making the best webcams in their Macs, but I think most webcams incomputers kind of suck anyway, but Apple’s making them better, and they will get evenbetter, better with time when they implement their own silicon, which we’ll talk about in a bit. But in this particular iMac, we now have a 1080p FaceTime HD webcam, and we also have a new microphone array, which helps capture audio much better. I’ll test it for real onceI have the iMac in my lair, and we’ll see how good it sounds or hear how good it sounds. So make sure to subscribeand stick around for that. But on paper, this sounds pretty good. And the reason why the computer is able to work with audioand the camera better is because it’s usingthe T2 Security Chip. Yes, the T2 Security Chipdoes security things, as the name suggests, butit is custom Apple silicon, which means it can providecustom features Apple needs, just like you’re use inyour iPhone all the time. There’s an image signalprocessor in this iMac, which can help the cameraperform certain operations, face detection, exposurecontrol, tone mapping, and it uses all of those technologies to help make a better picture. Speaking of the T2, I know not everybody lovesthe T2 Security Chip, especially the people in thehacking and modding community, and I feel ya, I get it, but we have to remember Apple is playing to the largest common denominator here. And most people are gonnawant the security features that the Apple T2 Security Chip can offer, and they’re not gonnacare that it may restrict certain modding abilitiesand stuff like that.

So again, I can level with you guys, but unfortunately we’re aminority and Apple knows that. It’s an ongoing debate ofprivacy versus flexibility. And I don’t wanna get boggeddown in those details now, but I just wanna let you know,I can empathize with you, but the T2 Chip does more than just certain security things. It actually does other features like we talked about with the camera, but there’s more to it likevideo encoding with HEVC. If you’ve seen my other episodes you know that HEVC can be very demanding. And if you don’t havehardware acceleration, like in this computer,to do HEVC encoding, it will take forever. So I’m excited to see how fastthis new iMac can do that. Okay, let’s talk about specs. The baseline configurationfeatures a six-core, 10th generation IntelCore i5 at 3.1 gigahertz, eight gigabytes of DDR4RAM, a Radeon Pro 5300 with four gigs of memory, and 256 gigabytes ofsuper fast SSD storage with speeds up to 3.4 gigabytes, not gigabits, gigabytes per second. That sounds pretty awesome. And that will run you 1799 U.S. dollars, and that will ship almost immediately right when you order it. Now, keep in mind if you do what I do and you like to customize your iMac, the shipping times are gonnatake a little bit longer, but they’ll be worth it. Maxed out, the 27-inchiMac features a 10-core, 10th generation Intelcore i9 at 3.6 gigahertz, 128 gigabytes of DDR4RAM, or Radeon Pro 5700 XT with 16 gigabytes ofmemory and eight terabytes, eight freaking terabytes, of SSD storage. If you take all of that, plus you add the nano texture glass and the 10 gigabit ethernet option. you’re lookin’ at 8799 U.S.dollars for that configuration. As for the IO, it’s thesame arrangement as before, which is nice. It includes the 40 gigabit per second Thunderbolt Three interface, but it also features someof the slightly older stuff that makes me super happy. SD card slot, USB type A. 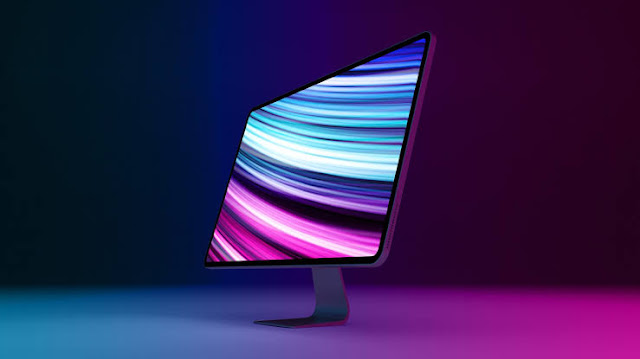 Oh, thank you, Apple, thankyou for leaving that in there. For my personal config, I maxed out the processor no problem, but as for the RAM I’m okaywith 32 gigabytes of RAM. This thing only has 16. I’ve been using it for almost seven years. 32 should be fine. I went with the middleoption in video card. That should be good, too. And I also only got theone terabyte SSD option because most of my datais stored externally on a RAID anyway, and that’s more efficient for me, once I get the RAID replacedthat got damaged in the mail. Oops. Another cool thing is the iMac does come with a mouse and keyboard, which I don’t really need because I already havea mouse and keyboard, so I’m just gonna sell themand make some money, pro tip. Okay, so I know somepeople are asking, Ken, why didn’t you wait forthe Apple silicon Mac? Why didn’t you wait for the Mac to be redesigned and look better? My reason is I don’t care. I know that was a little blunt. I’ll explain. Again, I’ve been on thiscomputer for almost seven years. So at this point, I’lltake any upgrade I can get. I know there’s some cool stuff coming as Apple transitions awayfrom Intel to Apple silicon. But as of right now, I just need a newer, faster computer. I’m still gonna usethis as a field machine, but for my desktop dailydriver at the home office, well, I just needsomething a little faster than this seven year old thing. Don’t wanna hurt it’sfeelings though, shhh. The other reason I’m buying this iMac now is with the new system, it’s gonna have a new designand a new architecture, and you have to treatthat like a version 1.0. There’s probably gonna be problems. Will it transition smoothly? Absolutely, that could happen. But there could be issues. So I probably won’t be anearly adopter in this case. I just need somethingsooner rather than later, and something that’s reliable. I just jinxed it didn’t I. But I do wanna try the newiMac when it comes out, probably in 2021, and that’sgonna feature Apple’s new SOC. And I was talking about that a little bit throughout this episode. And what I mean by that is Apple currently uses Intelprocessors in their systems. And sometimes depending on the model, there’s a T2 Chip or a T1 Chip. And there’s some customApple silicon features with those chips. But those chips work withthe Intel systems together to try to make your experience happen. But what Apple wants to dois they wanna get rid of that and build the whole system on a chip, SOC, into their computer.

Like they do on their iPhonewith the A series chips. They wanna do that so you can get way better performance per watt, and a bunch of uniquefeatures that you can’t get with the Intel chip set. For example, Apple siliconcan offer the speed and the security neededfor a true depth camera. So you can unlock your computersuper securely with face ID, like on your phone. Apple can already do that on their phones because the phones arealready using Apple silicon. Once the Macs start using that stuff, you’ll be able to get featureslike that in the future. So Apple silicon is going to be great. There’s gonna be a transition, of course. There might be some bumps in the road, but it’s gonna be pretty freakin’ awesome. I actually did a whole separate episode explaining Apple silicon, so I highly recommend you check it out. It’s a good one. Let me know what you thinkabout the new 2020 iMac, and also feel free to letme know what you wanna see in the next, next iMac whenthey switch to Apple silicon.