Your budget for a new smartphone is under $ 60 but you don’t want to buy a phone that will quickly let you down? You need to choose well in this price range and we can help you with that. Of the not-so-new devices that are already at their best when it comes to price, the LG K40S is one of the most indicated among the entry by our newsroom, and the Galaxy A20 is a sales success from Samsung – want to know which one will be your next choice?  You already know that plastic on the back and the frame is what we find on the body of these two devices. The available colors are solid and without holographic effects, making them more simple and elegant. The large size makes them easy to slip from the hands and the LG usually scratch more easily in size, they get to be very similar with a difference of a few millimeters but the A20 is going to be a little bigger, while the K40S is thicker and heavier. 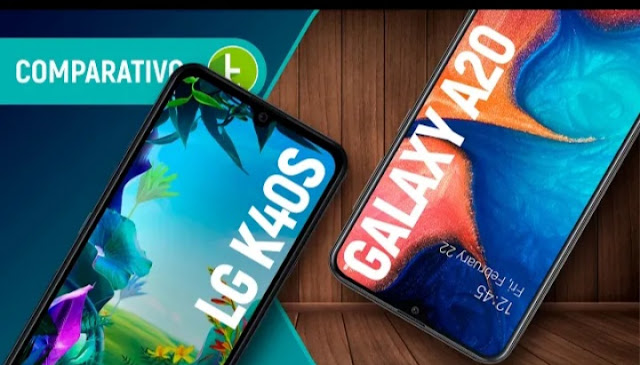 This LG, like many others by the brand, brings MIL-STD-810G military certification as a differential that makes it more resistant to drops, humidity, and variable temperatures, while the Samsung it has no protection. Their notch has differences, being in “U” and more discreet in the A20 and in bigger drop-shaped one in the K40S. This LG phone, unfortunately, has a Micro USB connection that is older and less used than the USB-C of the A20, but it brings an extra feature to its design – one more button just for you to invoke the Google Assistant without having to say “Ok, Google”. In similarities, the two are dual SIM and offer the exclusive space for Micro SD, in addition to having biometrics at the rear. They are not the fastest in recognizing fingerprints, but they also face no problems as on devices that have the feature below the screen. We opened this score with a draw. For a change, the displays that are competing here are big, with 6.1 “for the K40S and 6.4” for the A20. The HD+ resolution is the same for both, this makes the pixels more visible, but in the rest, they are different it starts with technology that is IPS on LG and Super AMOLED on the Samsung. This leads to more balanced and accurate colors together with good contrast in the first with more intense colors and more sharpness in the second. In terms of brightness, the A20 certainly does better in the sun and it also stands out for having a greater Screen to body ratio, since it has bezels that are thinner and more discreet using its size in a better way. Its Aspect Ratio of 19.5:9 is longer the 19:9 on the K40S so, the overall result of this is a point for the Galaxy A20. Audio is not really an item that manufacturers usually pay attention to when we’re talking of entry-level smartphones and that’s exactly what happens here.

They are two mono smartphones, with decent a sound for their price, that do not distort too much when at maximum volume, but that will also not be a highlight. The bundled headphones of these rivals are as simple as possible, serving more for calls using the built-in microphone, than for music itself. Its format is not very comfortable, so you better invest in some better ones to use their P2 connection. The LG K40S stands out slightly because it has some special settings to be used with the headphones, whether wired or wireless. The DTS-X 3D technology makes a difference, so it ends up making a point for the K40S. If a lot of functions and settings to move is something that interests you, both the A20 and K40S will please both have their own interface on top of Android and are full of features and both also come out of the box with Android 9 Pie, only while Samsung surprised and already brought the update from Android 10 to A20, even earlier than expected, LG follows its erratic and uncertain updates policy, so we don’t have any predictions for the K40S. The A20 is unlikely to receive on Android 11 and the same goes for the LG phone. If we talk about fluidity the K40S gets ahead – LG has a lot more in system optimization for its simpler phones, while Samsung usually loses processing points precisely because of not knowing how to harmonize software with hardware. In connections they are very similar, both have Bluetooth 5.0 and Wi-Fi, although it is said to be more versatile and dual-band on LG, we were unable to connect it to faster 5 GHz connections than possible on the A20, which are only 2.4 GHz, so they stay the same. They bring FM radio but do not sport digital TV. So the point is with the most updated, the Galaxy A20. A good entry phone needs to be fluid to handle the number of apps that are going to be installed overtime – here we don’t have the most modern and current sets, but we’ll see if the results are good. The K40S features the Helio P22 chipset while Samsung responds with its own set for processing, the Exynos 7884.

The two have 3 GB of RAM and 32 GB of storage, in addition to the dedicated slot for Micro SD. In benchmarks, as in AnTuTu, always noting that we ended up testing in different versions because they were launched at different times, the A20 goes from 10% more in points. In practical tests, things change – opening several applications, we realize that the A20 is even faster in the first round, but when reloading the apps the K40S does much better achieving a final result of more than 20% speed. Its more modern processor helps with this. For games the two will sweat the shirt to run heavier games, requiring lower graphics but they will run smoothly lighter titles. For practical performance, the point is with the LG K40S. The K40S is thicker and heavier but has a smaller battery, 3,500 mAh. Its competitor has 4,000 mAh and ended up showing better results in our tests standardized. With the A20, reaching more than 20 hours of autonomy, the LG device is two and a half hours ago, just reducing the difference in screen time, which is an hour apart compared to 10 ½ hours from Samsung. When recharging the K40S comes with a very slow 6-Watt charger in the box. The A20 arrives with a 15-Watt one, and while that doesn’t guarantee it will load quickly, makes Samsung’s largest battery charge an hour faster than the almost three hours asked for the LG device – the point here is rightfully given to the Galaxy A20. For having here two devices from last year, a time when simpler devices did not yet have entered that trend of excess of cameras, we have here two sets of just two cameras. The LG K40S has a 13 MP main wide with f / 2.2 aperture and a PDAF and a 5 MP ultra-wide. The A20 features a 13 MP main wide and an f / 1.9 aperture with autofocus and an ultra-wide Of 5 MP. They are considered basic sets and despite everything the K40S manages to stand out, of course, we don’t can charge too much for its hardware, but from what he brings he can have better photos than those of competitors, including the A20. Neither will have excellent details in the photos, but they can do well in good lighting with the K40S bursting the sky less and bringing a better depth of field. The A20 can lose focus more easily in more open landscapes improving indoors. The wide-angle of both does not make much difference in the photos for the main camera but it distorts the edges more on the A20, and in less light situations it also ends up doing better on the K40S. In the photos with the main LG will not be that wonderful, but certainly has less noise in dark places – so the point is for the LG K40S. For video, we have two cell phones that record in full HD with basic quality and unable to capture anything at night. Audio capture is normal on the A20 and falls short on the K40S, which at least doesn’t shake as much and has an agile focus – finally, they also tie here. At the front, the K40S has a 13 MP sensor and the A20 with an 8 MP sensor. Once again, they are photos that we cannot demand much of. In selfies, the LG has good quality but the low focal length and dynamic range, so it fits fewer people and the sky can be more burst.

On the A20 the results are decent for selfies, but the Blur from Portrait Mode turns off HDR and the background ends up bursting like on the K40S. For the result of the photos, that you are also check here, the point of the selfies goes to the LG K40S. Taking the launch price the K40S reached the Brazilian market costing $ 60 while the A20 arrived much more expensive, for R$ 65. It doesn’t really matter now, because they’re not exactly new anymore but following the difference of the launch, today’s best prices also, bring the difference of about R$ 300 – the current moment has made the devices increase, and just a few months ago the two were below $ 50. Comparatively, the price of the K40S has always followed better than Samsung’s rival and it is more cost-effective, taking into account the characteristics of both. So that final price point goes to the LG K40S. If we were talking about more sophisticated mid-range devices, Samsung would take the crown without any problems In a competition against LG, however, in terms of entry-level phones, even in simpler intermediaries LG has been bringing good results. The A20 has some important PROS like a better battery, better recharge time and more possible updates. The K40S, however, has better performance and cameras in addition to not having a bad battery and still, being cheaper. For a price even lower than the A20, you find the K50S, which is also very interesting or even the Moto G7 Play, which already comes with Android 10. But between these two featured in this comparison, the K40S is a better purchase. But what about you, which one would you get,the K40S or the A20?