The K61 was LG’s return to the mid-tier market segment after a long time investing only in basic cell phones. It got it right with the K series in recent years, but will the K61 have the strength to outperform Motorola’s device who is one of the darlings of Brazilians? Here we have a comparison against the Moto G8 Plus and we will see which intermediary is worth your money. Shall we begin? We started with design and looking at each one we have the impression that they are cell phones from different times. The G8 Plus also features a drop-shaped notch, which makes it quite evident that we are facing a 2019 release. The K61 has a punch hole for the camera in the left corner of the screen and looks more modern. Both are made of plastic and deliver similar build quality but the LG one is more elegant and has a higher premium cell phone appearance, besides having military certification which guarantees greater resistance against impacts, extreme temperatures, and humidity. You don’t care about the superior durability and want the lightest and most compact one? Then pick the G8 Plus. We have biometrics on the back on both, the fingerprint reader works well and unlocks the cell phone quickly on Motorola and LG. 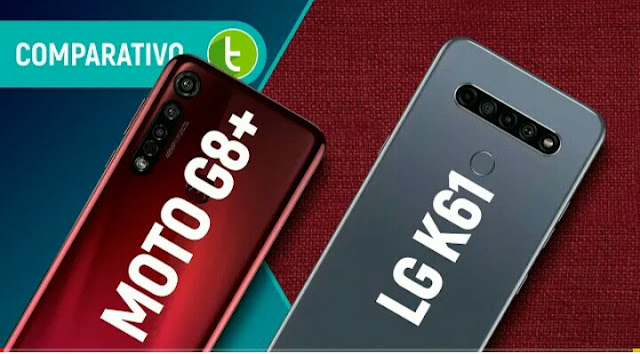 An extra that the K61 offers is the dedicated Google Assistant button which makes it quick to do a quick search or find out how the traffic is. And we started with the K61 taking the first point. LG’s device has a bigger screen with a little more pixels than its rival. However, Motorola’s has a better quality panel. The G8 Plus’ screen has stronger brightness, superior contrast, and better color rendering. Its viewing angle is wider and all of this makes it a more pleasant phone to use outside the house and on sunny days. Motorola’s phone is also the best at the sound part, it is one of the few intermediaries with dual sound output. While the K61 delivers mono audio, with the G8 Plus you will have more powerful and balanced stereo sound. LG needs to pay more attention to this on its phones. Including technologies like DTS-X Surround does not help, especially when the earphone that comes with it Is way too weak to deliver good music experience. Even in that, Motorola has an advantage, with the best handset offered in the box. We give the G8 Plus a double point for better screen and sound. If there is a point that Motorola and LG disappoint is in Android updates. The K61 and G8 Plus arrived with Android Pie and so far there is no right update date for Android 10. And if you expect to see Android 11 in those two someday, I’m sorry, but don’t even get your hopes up. The K61 has a modified interface that resembles Samsung’s One UI. There are several extra features that you will not find on Motorola, but the software lacks optimization. It takes a while to get back to the home screen and sometimes we even see the icons being reloaded. Rolling the screen quickly results in lag, which makes the experience a little frustrating.

And then the question arises, it is better to have a system more full of features or a cleaner one that does just the basics well? It is up to you to decide. With that, we set it a tie in the software part. Motorola bet on the Snapdragon 665 chipset, the most popular for middlemen in 2019 and 2020. LG decided to invest in Helio P35, a kind of old solution from MediaTek that did not attract the attention of many people. Which one is better? In our standardized speed test, we won the G8 Plus in multitasking. This also happened in benchmarks – Snapdragon scores higher in virtually every synthetic test. In AnTuTu we have seen a difference of 80%, which shows how the P35 is weak hardware and inappropriate for intermediate phones. Even games struggle to deliver smooth fluidity on LG’s cell phone. The combination of a weak GPU with a Full HD screen was a bad decision for the Korean brand. The Moto G8 Plus delivers a superior fluidity in every game, especially the heaviest ones. We then give the G8 Plus a point for better overall performance. A proof that the Helio P35 is not a good chip is in its low energy efficiency. The G8 Plus and K61 have the same battery size, but the Motorola intermediary delivered autonomy 16% higher – this means that when the K61 is unloading you will still have a few hours of use with the G8 Plus before you need to run after an outlet. At least in recharge time, there is nothing to complain about the LG model it takes practically the same time as the rival to make your battery go from 0 to 100%. For having better autonomy we give Motorola a point. Both have the same 48 MP sensor and should deliver the same photo quality, right? This is where we see that the Helio P35 compromises the experience. 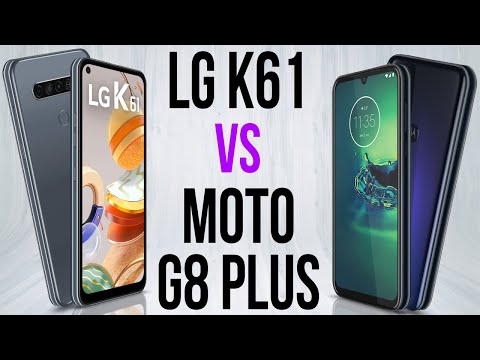 It is too weak to handle a sensor of this resolution and at the end, we have photos with low-quality textures, lifeless colors and ineffective hdr. Not only does Motorola’s phone shoot better photos by the day, but it also stands out at night for its efficient Night Mode. Both have a camera with a wide-angle lens, but in the case of the G8 Plus, it is only for video. The most you can do is take a print of what is being recorded. The K61 has a dedicated macro camera and may look like a nice extra, but the focal length is not good and the resolution is low. In many cases, it is better to use the main camera and zoom in a little. We give the G8 Plus a point for a better rear camera. The front camera of the Moto G8 Plus has higher resolution, and in general, records selfies in more detail, right colors and less noise. It suffers a little in darker places, where we have a sharp drop in sharpness but the K61 also suffers from the same disease. The Portrait Mode is more efficient on Motorola and does not present as much noise as on the rival. For selfies, we also give Motorola a point. The Moto G8 Plus shoots in 4K with the rear, while the K61 is limited to Full HD. The quality of the footage is better on Motorola. There is also less shakes and a more agile focus on the G8 Plus. The best part is that you can hold your phone vertically to shoot in landscape. And even the audio capture is worse on the K61, with a very muffled sound. We ended the camera part with another point for the Moto G8 Plus. LG’s intermediary not only landed here more expensive but currently costs more than Motorola’s rival, that is, we have an inferior cell phone in practically and who charges more for it. We give the last point of comparison to the Moto G8 Plus for having better value for money. Yes, LG has been out of the intermediary market for so long that it seems to have forgotten how to do it a good phone. The K61 looks more like an inflated entry product and it makes no sense to choose it when Motorola offers a better option and charges less for it. Between the two, choose the Moto G8 Plus. It has a better screen, stereo sound, delivers superior performance, its battery yields more, the cameras are better and the software chokes less.