MPenn Tech and today,I’m going to be reviewing the Logitech G915 TKLIt’s from Logitech’s G series line aimed at gamers and is a cut down version ofthe original G915. For those wondering what TKL stands forit means 10 keyless so say bye bye to the number padand hello to more mouse movement measuring at only 368 millimeters inlength. It’s also crazy thin for a mechanicalkeyboard measuring at only 22 millimeters in height.It’s a wireless keyboard featuring Logitech’s light speed technology whichpromises to deliver only one millisecond of latency. The G915 isavailable in three flavors. GL Clicky giving an audible click andtactile feedback. 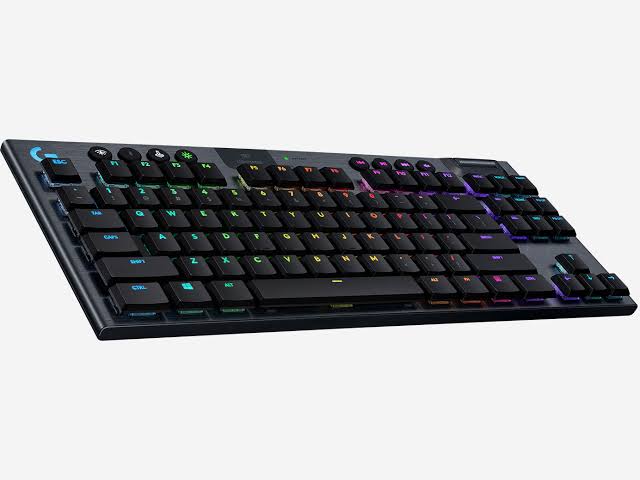 GL Tactile which is a gentle bump forsome tactile feedback. and GL Linear which is a completelysmooth keystroke. I went with GL Clicky which I think isgoing to be most people’s choice when buying this keyboard. The keys have anactuation distance of 1.5 millimeters and anactuation force of 50 grams with a total travel distance of 2.7millimeters. It wouldn’t be a gaming keyboard withoutRGB and the G915 TKL is no exception. It uses Logitech’s LIGHTSYNC RGB technologythat offers 16.8 million colors and the ability to customize lighting acrossevery key. In the box you get the keyboard obviously,a braided micro usb cable; we’ll talk more on that later,a quick start guide, a Logitech sticker, the LIGHTSPEED adapter and the MicroUSB adapter. I’ve been using this keyboard for arounda week now and in this video we’re going to go over my experience using it.I used it primarily for software development and some like pc gaming.I’ll be honest I don’t really play pc games too much sobear that in mind with this review. On the flip-side, I’ll offer my in-depthinsight as to what this keyboard is like forproductivity. So right off the bat, I’m surprised. I’ve been using thiskeyboard for mostly work and I can honestly sayI’m really impressed with it, so much so that I think it’s actually going toreplace my full-sized apple magic keyboard. I’vebeen using MacBook keyboards for the past 12 years now and I’ve alwaysconsidered their keyboards, barring the butterfly switch keyboardsthat were on the last generation of macbooks,to be, the gold standard of keyboards. Hands down.

I like how they feel, I like the travel, justeverything really and typing on anything else just really feels unnatural to me.But ladies and gentlemen I can honestly say that this keyboard has changedeverything for me. I immediately felt comfortable typingwith this. Normally when I use keyboards that are alien tome I really struggle to find that confidence of using it straight away,and by confidence I mean not having to look down or second guess what I’mtyping every so often. So the travel – I think it’s just theright amount for me. Usually when I’m using a mechanical gaming keyboardI find that the travel is just too much and the keys are just way too tall.But with the G915 and its thin design and low profile,I find it to be a happy middle ground between tall keys with too much traveland ultra low profile keys with not enough. Surprisingly though,or maybe not so surprising since I’ve used Apple keyboards for well over adecade now, I did typing tests on both keyboards andon average I scored 58 on the Apple Magic Keyboard and 55 on the G915.It’s not much difference, but I’m sure once I’ve got more experienceusing the G915, I’d definitely be able to get my score up.One thing I thought I’d miss, is the number pad since I use keyboards mostlyfor work. But again I was surprised, I did findmyself wanting to type numbers on the number pad a few times, butnot too often. Instead I realized that I was naturally placing my mouse closer tothe keyboard where the number pad would have beenso that my arms weren’t as stretched out when working. 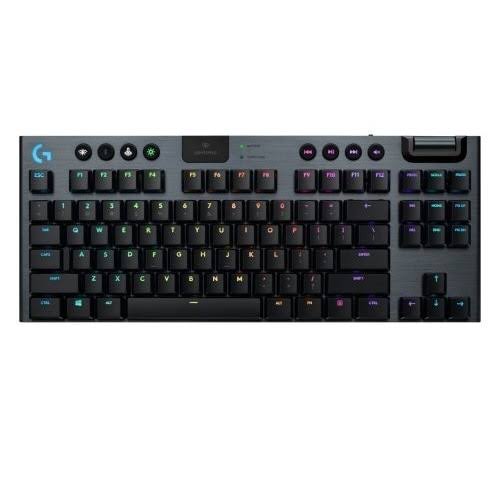 The shortcut keys are niceand I especially liked how you could switch between Bluetooth and LIGHTSPEEDwireless. I set it up so I have LIGHTSPEEDconnected to my PC and Bluetooth connected to my MacBook.And whilst we’re on a subject of Bluetooth, one feature I would have likedto see, is the ability to connect to multipleBluetooth devices and easily switch between them.On the other hand though, I can see that Logitech really put a lot of thought anddesign into making the volume wheel.l It’sperfectly placed so that when I want to quickly adjustthe volume, I can do it without even having to look for the correct mediakeys. Since it’s placed at the top right ofthe keyboard near where my mouse hand would beI find myself just leaning my thumb over to adjust it when needed.Nice! Using Logitech’s G HUB software, you can pretty much configureeverything about the keyboard. With LIGHTSYNC you can choose from a varietyof preset effects and customize their speed and brightness.Using the Freestyle menu you can configure how each key behaves, somaybe you’d want to highlight all of your game keys, for example.What’s also good about this feature is that you can save presets so you couldhave one for each game or app. In the animations menu there are morepresets for you to use and also adjust to your liking.You can also create your own animations too. For functionality you can create custom commands, macros,keys, in-app actions and system actions.

There is also a game mode which allowsyou to disable certain keystrokes so maybe you’d want to disable the windowsor function keys, for example. Battery lifefor me has been fine. Logitech says that the battery can lastup to 40 hours with RGB on and I’ve been using it for five days nowand I still haven’t charged it yet. This is nowhere near as much as my applekeyboard. I’ve owned that thing since the start of2020 and I can honestly say I’ve only charged it like two or three times.But really it’s not an issue since you can still use this keyboard while it’scharging. One crime that Logitech has committed isusing Micro-USB for the charging port. Why!? Justwhy!? It’s 2020! This would have been a crimetwo years ago. In my opinion there’s no excuse now for using Micro-USB insteadof USB-C. So Logitech… Your MX-Master Series micenow use USB-C so why did this have to miss out?You’ve even gone through the effort of supplying us with a nice braidedMicro-USB cable too, so you definitely weren’tskimping out on the costs here. Anyway, rant over. For gaming it’s anexcellent keyboard. I’ll be honest though, I don’t reallyhave too much to base this on since I don’t really use keyboard andmouse for pc gaming other than with RTS games.I much prefer to be one of those annoying people who let their team downon first person shooters by being the only one with a controller.If you’d like to hear more from a gamer’s perspective, I’d recommend youcheck out ShortCircuit’s review on this keyboard as well.In conclusion, the Logitech G915 is an excellent keyboard.It’s good for both gaming and productivity and can easily be yourgo-to for both. It’s quite expensive at £200. Butif you are someone who spends most of their days at a desk 9 to5 then it’s definitely worth it and I can really recommend it.Well that’s it for today.!