Today we are going to look at a very interestinglaunch by MSI, they have entered into liquid cooling after releasing some nice lookingair coolers, and this is their new 360 mm liquid cooler, named MAG Coreliquid 360R.  . You get it in this very nice white box, andafter opening it. We get these 3 ARGB fans and these spin upto 2000 RPM. Then you get a quick installation guide, thenice 360 mm radiator with an integrated pump, and here’s what the CPU block looks likewith this shiny MSI logo in center. You also get a fan speed reducer to lowerthe noise of the fans by limiting them to 1500 RPM, and you also get a molex power adapterif you are a caveman who still uses molex. We also get a 1 to 3 way fan splitter in thebox, and it also includes thermal paste, but I got a special edition from MSI that doesn’tinclude these two things. Now since we had the pump integrated in theradiator, we don’t have to have it here on this CPU block, so it is more compact thanother AIOs which have a CPU Block integrated pump, and this should result in better longevity,temperatures, and maybe even lesser noise depending on how you install the radiator. You can also rotate this RGB cover on CPUblock at up to 270 degrees, so you can keep the logo upright, regardless of how you installthe CPU block. 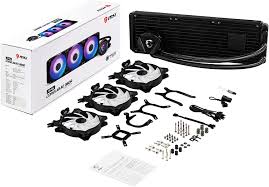 The cooler supports most of the sockets Iknow about on Intel and AMD platform, so you get the mounting brackets for Intel 1151 andthe newer LGA1200 socket, this also supports Intel’s HEDT sockets like 2066. Then we have the single bracket for AMDs AM4and older sockets, and you even get a bracket that supports the sTRX4 and SP3 sockets fortheir Threadripper and EPYC lineup. But because we don’t have a cold plate thatis big enough for Threadripper, you probably won’t get good results if you use it withthose CPUs, and I have made a separate video on what kind of cooler you need for Threadripperwhich you can check out by clicking on the card in video. But it is still great to have support forThreadripper just in case you are in a situation where you have to use a regular AIO. One thing that I really liked about this cooleris that you can switch the brackets for different sockets very easily by just sliding it inor out, and this also works really well and it fits very tightly. So as a person who constantly has to switchbetween Intel and AMD, this is an amazing feature to have for me. ALSO MAKE SURE YOU’RE SUBSCRIBED TO THECHANNEL WITH BELL ICON SO THAT YOU DON”T MISS OUT ON FUTURE VIDEOS This is an aluminum radiator with a 27mm thickness,which is pretty standard, and the integrated pump we have here spins at 4200 RPM, so itshould be able to move a lot of liquid. You also get a service valve in the radiator,and I think you might be able to change the liquid by unscrewing the screw that is underthis cover. Installation on AMD sockets is of course deadsimple, but even for Intel sockets, you have a holder for the screws that should make theinstallation easier. Other than that, the process is simple ifyou have installed other AIOs, you just have to install the fans, mount the radiator, andinstall the CPU block.

The CPU block and fans have a standard 5 volt3 Pin addressable RGB header, so that means you will need to have an ARGB header on yourmotherboard, but the great thing about the fans is that you can daisy chain them as theyhave have both male and female ARGB ports, so you will only need a single ARGB headerto light them all up, and you might even be able to plug the ARGB header of the CPU blockin one of the fans. Another thing that I liked about this cooleris that the tubes are quite flexible and easy to route, so it’s not going to fight youif you try to install it at odd angles. And this is what it looks like after installation,and I have to say that it looks pretty sweet. MSI does lean towards a more gamery and aggressivelook, so their dragon logo doesn’t scream minimalism, but the other parts of the coolerare designed pretty well and the simple light triangle on the CPU blocks complements thelogo well. One thing you have to keep in mind is thatthis doesn’t include an RGB controller like some other coolers, so everything will becontrolled by your motherboard’s RGB system, so it of course supports MSI’s mystic light,but I am controlling it here with Aura Sync, and it should also work with AsRock’s polychromesync. It also complements the style of my MSI RTX2080 Ti Gaming X Trio very nicely, and the RGB on fans also looks nice, so overall Iam pretty satisfied with how it looks. I kind of forgot to record a noise test, butMSI says it runs at 49 decibels on max speed, and it was not loud at maximum speed in myLian Li case. So I don’t want to compare it with my CoolerMaster AIO, because it is 2 years old, I have never cleaned it, and I am using Corsair Fanson it which are lower speed, but the Mag 360R was able to perform well with my Core i9 9900K. It is a pretty hot CPU, and in AIDA 64 CPUstress test, it was able to maintain an average temperature of 69 degrees with my room temperaturebeing 30 degrees celcius, and I didn’t test it for more than 10 minutes on Prime 95 SmallFFT because it is not a realistic workload test, but even there it was able to maintain85 degrees celsius, which may not seem like a good result, but it actually is on thisCPU because it consumes Threadripper levels of power. 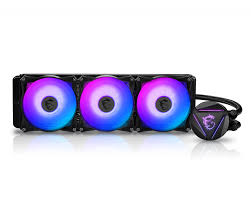 So in conclusion, I think that this is a greatentry by MSI into all in one coolers. The cooler looks nice, installation is notdifficult, it has some interesting features and I like the convenience of daisy chainingthe fan RGB and easy switching of CPU bracket, and finally it also performs well, at leastin my limited tests. I think this will cost around 12 to 13 thousandrupees, or about 160 US Dollars, so it is not priced alongside the more expensive 360mmAIOs, so for that price I think this is definitely worth considering, especially if you likethe MSI aesthetics, or you are using other MSI components like their motherboard or GPUlike me.