Are looking for a good entry-level cell phone that offers an advanced set of cameras and current design? So your question may lie between the Moto G8 Power and the K51S – which one is more worth buying? That’s what you’ll find in this complete comparison of TudoCelular.com. K51S and Moto G8 Power have a lot in common – they are devices with simple build quality they have a hole in the screen on the left side to house the selfie camera and have 4 cameras at the rear. Motorola’s is smaller and has thinner edges, but the device thicker because it has a bigger battery. The biometric reader is located at the rear and works well on both. If you are looking for the toughest then the military certification of the K51S will appeal to you. It promises to withstand more drops, extreme temperatures, and humidity than Motorola’s rival. LG has kept a dedicated Google Assistant button on all of its phones this shortcut is interesting for doing a quick search. In terms of connectivity, there is no difference between the two – no NFC or 5 GHz Wi-Fi in these basic phones from LG and Motorola. We then start with one point for each. LG and Motorola bet on LCD screens but the quality of the panel is different. The G8 Power delivers stronger brightness and more pleasant colors, superior contrast and better viewing angle The K51S screen really disappoints, being the worst we’ve seen in LG’s latest releases. It is almost impossible to use your cellphone outside on sunny days. In terms of sound, the G8 Power also takes advantage. It has two sound outputs which results in stereo sound, while LG continues to bet on mono audio. 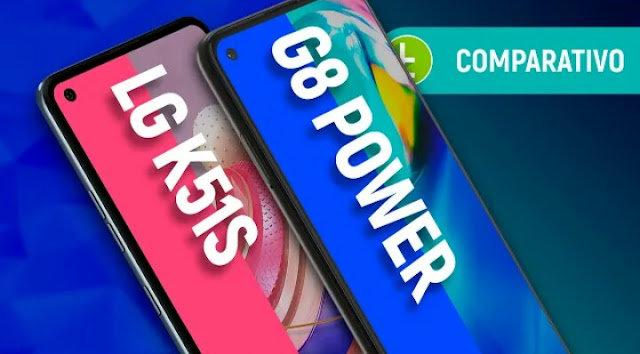 Motorola delivers more powerful and balanced sound, making it the best choice for anyone Willing to listen to music or enjoy games with greater immersion. The headset that Motorola provides with your phone is better than the basic LG accessory. It is more comfortable and delivers a better listening experience. Plus, regardless of which headset you’re using, the G8 Power will be a better choice to listen to music. And so, Motorola takes dual points in multimedia. When it comes to the Moto G line there’s not much to talk about software we have the same features as always. The interface is very clean, very close to the stock Android and brings the Moto app with some gestures you may already know, such as turning your wrist to open the camera or shaking your phone to turn on the flashlight. LG has been modifying its interface with each release and brings many more extras than you will find on the Motorola phone. Many do not like the look with traces inherited from Kitkat, but Android present in the K51S it’s cleaner and even resembles Samsung’s One UI interface. The problem is to come with Android Pie and show more gagging while the G8 Power arrived with Android 10 Which one is more likely to see Android 11 someday? Probably Motorola’s. We give points to the G8 Power in software. Motorola bets on Snapdragon 665 while LG preferred the Helio P35 and you may already be thinking: the LG is slower due to old and weak MediaTek hardware. This is where Korean’s well-optimized Android makes the difference. The two ended up tying in our standardized speed test on opening and reopening applications and games to check multitasking performance. If you are a fan of high numbers in benchmarks then you will be disappointed with the K51S This is where the Snapdragon 665 makes its superiority clear. In AnTuTu we have a difference of up to 70% in the score between the two. If you are looking for a good gaming phone these two might not be for you. The K51S has more lag, but the G8 Power also struggles to run heavier games it is necessary to reduce the graphic quality. The G8 Power leads the way in overall performance. The battery is the main focus of the G8 Power and it has 1,000 mAh more than LG’s rival. Does that make a big difference in autonomy? Yes, a lot! In our tests, we saw the Motorola battery yield almost 50% more this means that LG even lasts an entire day with a little charge left over for the next morning but with the G8 Power, you can have a battery for two days. And which one spends less time plugged in? This is where the K51S’s smaller battery takes advantage. It takes 25 minutes less to go from 0 to 100%, which can be a differentiator for who has fewer patient.

The Moto G8 Power wins in the battery category. We have a set with four cameras in each, the K51S has the main sensor with twice the resolution but compresses photos and delivers lower quality than Motorola. You can even change settings to save photos at all 32 MP but still, the G8 Power ends up delivering better colors, sharp contrast, superior sharpness and HDR that works as it should. None stands out at night, so expect dark photos. We have an ultra-wide camera in both, the G8 Power’s deliver better quality and less noise but it suffers more distortion in the corners of the images. The K51S loses sharpness and has poorer quality textures, in addition to struggling more at night. Both have a dedicated macro camera with low resolution and no autofocus. Don’t wait for photos in incredible detail, they just make do but Motorola can capture better images. Finally, we have a telephoto camera on the Moto G8 Power that allows you to zoom in 2x without losing quality, while the K51S features a background blur sensor. The G8 Power takes points for better set and photographic quality with rear cameras. The front camera of the G8 Power has a higher resolution but this does not guarantee greater clarity than the rival. By default it tends to soften the skin, leaving the selfies with inferior quality we recommend disabling this feature. Overall, both can take good selfies during the day, however, the G8 Power takes advantage in Darker locations. It suffers less loss of sharpness and has less background noise. Its Portrait Mode also fails less. And the G8 Power takes another point in the camera. Is Motorola also better for filming? Yes, in addition to being able to record in 4K with the rear it has electronic stabilization when shooting in Full HD, your focus is more agile and captures cleaner audio.

The K51S camcorder has a nice quality but the focus is very slow and will end up annoying you. We closed the camera part with the last point for the G8 Power.The K51S arrived for R$ 1,500 and the Moto G8 Power debuted for R$ 100 more. Currently, LG’s are a little cheaper and as the brand’s phones tend to devalue more than Motorola’s, it will be normal to see an even bigger difference in price between the two in the coming months. If only the cheapest one matters to you, then you will end up opting for the K51S it shouldn’t take long for it to be found at around R$ 1,000. We then closed the comparison with the last point going to the K51S. If you were in doubt between the K51S and the Moto G8 Power, now you know which one to buy. Motorola’s has a better screen, stereo sound, comes with the latest software delivers slightly higher performance than its rival, its battery lasts much longer and has cameras for better photos and videos. The K51S costs a little less nowadays and it makes no sense to save money to get it in place of the Moto G8 Power. When your price is at least R $ 300 below, then it can be something to think about, but in general, Motorola delivers better value for money.