The Redmi Note 9 was launched to replace the mid-ranger most sought after by Brazilians, the Redmi Note 8. Xiaomi’s new smartphone has its ups and downs, but overall, will it be able to deliver better value for money than the rival A30S from Samsung? That’s what TudoCelular.com will help you discover so you can make the best choice. Xiaomi has always stood out for focusing more on the build quality of its mid-range devices. However, the Redmi Note 9 replaced the glass rear with the same plastic you’ll find on the Galaxy A30S. If it doesn’t matter to you and you prefer only the one that is more compact and comfortable to use with just one hand, then you will prefer the Samsung model. Now, if you’re looking for a more current design with a punch hole for the selfie cam and a more premium feel will prefer the Xiaomi. At the rear, you will have more cameras on Redmi and they are centered in the middle of the device along with a more conventional biometric reader. It may seem like an old technology, but it works better than the rival’s on the screen module. Which one delivers a more complete set? The Note 9 brings NFC and infrared sensor to use the cell phone like a universal remote control – otherwise, we have the same technologies and connectivity. And we started with the Redmi phone taking the first point. Does having a Full HD screen really make a difference to you? If you use your phone too close to your eyes you will end up bothering with the jagged graphics shown on the A30S’ screen at an only HD+ resolution, on the other hand, the Korean model has a Super AMOLED panel with stronger brightness and superior contrast than the Chinese rival. 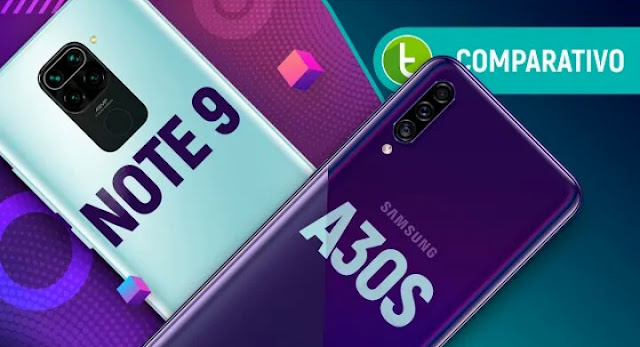 The viewing angle is also wider, as well as there is less incidence of reflections, whaht makes it the best choice for those who use the phone a lot on the street. In terms of sound, we also have better quality on the A30S. Its speaker delivers greater power and less muffled sound. It ends up distorting a little more when the volume is at maximum but you’ll hear the video you’re watching more clearly. The Samsung cell phone comes with a headset, however, the accessory is quite weak. It is worth investing in a better headset for listening to music with the A30S. In the multimedia part, we have a double victory for the Korean cell phone. Samsung and Xiaomi offer highly modified Android interfaces with several extras. At the Redmi we have a remote control feature that allows you to control several electronics in your home in the A30S we have digital TV so you can watch football or soap-opera from anywhere with a good image. The Galaxy hit the market with Android 9 Pie and was updated to Android 10 along with the latest version of One UI. The Redmi arrives with Android 10 pre-installed, which could guarantee greater support for system updates but Samsung is doing a better job these days. We give each one point in software. If you prefer a Snapdragon phone, then you’ve come to the wrong comparison. Samsung adopted the Exynos 7904 on the A30S and Xiaomi chose the Helio G85 for the Redmi Note 9. Which one has better performance, the Samsung or MediaTek chip?

In our standardized multitasking speed test, we had a big advantage for the Korean model – it was 88 seconds faster to open and reopen a dozen apps. Why did this happen? Simply because MIUI 11 is poorly optimized and unable to hold applications opened in the background. But this can be resolved if Xiaomi wishes. In benchmarks we have higher scores for the Redmi, in the case of AnTuTu, we have reached a difference up to 65% between the two. Too bad that all this power is not felt in real day-to-day use. But all is not lost with the Note 9, it has a more powerful GPU and even if it needs to deal with a higher resolution screen it still delivers greater fluidity in games. On PUBG it is even possible to play at HD with high quality without being angry. Here we draw – A30S takes points for better multitasking and Note 9 for being better at games. Xiaomi is usually more generous with battery and on Note 9 we have 1,020 mAh more than on A30S. This gave a difference of 15% in autonomy, making the Note 9 withstand more until the end of the day and even more load for the next day. If you’re the impatient type and can’t wait to wait hours to have your cell phone recharged which one to buy? Well, whatever – the two take the same time to go from 0 to 100%. With that, we give the Note 9 a point for having better autonomy. Which is better for shooting? Here we have two extremes.

The Redmi Note 9 records photos without contrast, with dull colors while the A30S saturates too much leaving everything artificial. At least in the case of Samsung, it is possible to disable artificial intelligence to reduce saturation while on the Redmi there is not much to do since even the HDR is flawed. Both have a wide-angle camera with the same resolution and focal aperture. By day the A30S takes advantage with clearer images and less noise while at night you will have dark pictures with both. The Redmi has a dedicated macro camera with autofocus. It’s a nice extra, too bad the resolution is very low. The depth sensor works well on both. The Galaxy A30S then takes stitches in photos with the rear set. In selfies, we have better quality on the A30S, especially in places with weaker lighting where Note 9 suffers a lot from sharpness drop. The fact that the Galaxy has a sensor with a higher resolution and greater focal aperture also helps a lot. With Portrait Mode the two can separate the planes well and have few flaws in the cutout. One more point for the Galaxy A30S. Looking for a cell phone to shoot in 4K? Forget! Neither will work for you. Now, if recording in Full HD is sufficient, then you should choose the A30S. It has better video quality and captures stereo audio while the Chinese rival has mono sound. The wide-angle camera also helps when shooting as long as you avoid dark places. With the Redmi you can shoot with the macro lens, but the quality is pretty bad. We closed the camera with one more point for the Galaxy. The A30S reached the national market in 2019 for R$ 1,600 and the Redmi Note 9 was launched this year here costing R$ 2,700. Does it make sense to pay this whole difference for a device that delivers less? The cost-benefit of the model officially sold by DL is bad, but for the imported one there is no fair price too, since you give up the warranty to pay the same value asked for the Korean rival or even a little bit more, depending on the exchange rate. With that, we give the last point of the comparison to the Galaxy A30S. The Redmi Note 8 may be the darling of Brazilians, but its successor has a very complicated cost-benefit. In the face of stiff competition, it is difficult to indicate Xiaomi’s new middleman. The Galaxy A30S manages to be better and cost less. It delivers a better multimedia experience, it’s faster, its battery yields well.