Are you looking for a good mid-range phone without paying too much? From Samsung we always recommend the Galaxy A30S, but now we have the A21S as a novelty from the Korean company that can be found for a similar price. The A30S remains a better indication or Samsung’s new mid-tier phone Is worth your money? Let’s find out! The A30S is a 2019 mobile phone, it features a drop-shaped notch that has taken over almost every release from last year. The A21S is more modern with a hole in the screen on the left side to house the selfie camera. Despite giving a modern feel, the recent launch of Samsung boasts Thicker bezels. This makes it bigger and also heavier, because of the more generous battery. If ergonomics are more important to you, you will end up preferring the A30S. Another difference is in the rear design – the new one brings all the cameras in one block as we have on the S20 series, but Samsung decided to cut costs adopting a more traditional biometric reader, while the other has fingerprint sensors on the screen. 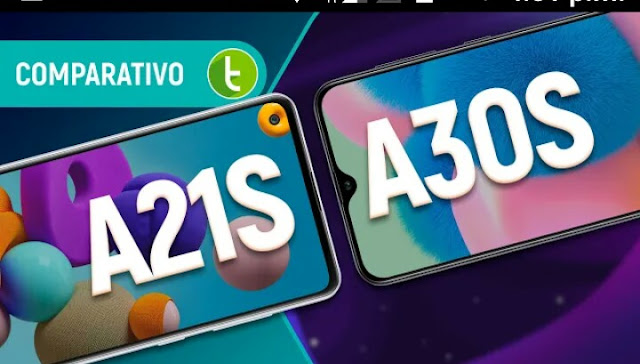 The A30S is finished with a holographic pattern that generates beautiful light effects depending on the angle you look at the phone. The A21S has a slightly more discreet chromatic effect, however, the build quality is the same On both. We then start with the first point by going to the A30S. We have a HD+ screen in both and what changes is the technology of the panel. Samsung cut costs on the A21S screen and adopted a simple LCD panel that doesn’t even come with a light sensor, that is, whenever you leave the house you have to set the brightness to the maximum level manually. The A30S, on the other hand, brings a Super AMOLED screen with superior brightness, more vibrant colors and better viewing angles. It also takes advantage of the minimum brightness and black levels, which will causes less visual discomfort when you pick up your phone in the dark to see the time or check out notifications. Both have only one sound output, in addition to mono audio none delivers good sound quality. The A30S can be a little more powerful, but it distorts more when the volume is at maximum. The A21S also has great appeal in the treble, which does not get in the way of watching videos.

If you are looking for a good phone to listen to music you will be disappointed – both bring a very simple phone which has only decent quality. And it’s not even worth investing in high quality headphones to listen to music with Samsung intermediaries. We give one point each in the sound part and an extra to the A30S for the best screen. The Galaxy A30S came with Android 9 Pie and was upgraded to Android 10 with One UI 2.0 this being the same combination present in the A21S. We can expect the latest to receive Android 11 in the future, while the oldest you can stay out of even new versions of the Samsung interface. The features are the same, as is the fluidity that is similar. The difference is for the A30S which has high definition Digital TV. There is the PiP feature, which allows you to continue watching TV while using another application. You can even record what is going on to review later and even create animated GIFs. We give each one point in the software part. The A21S debuts Samsung’s latest hardware, the Exynos 850. Is it better than the Exynos 7904 present in the A30S and several other Korean phones? In our multi-task speed test the older model was even a little faster fault of RAM management? Worse than not. The A21S was faster at opening applications. He ended up losing it was precisely when loading the content and this can be explained by the most advanced A30S processor. In benchmarks we have a small advantage for the A21S, and this is because despite its processor being less advanced, it works at higher speed. And in games? Here we have mixed results. None gets to run all games smoothly. You will always see a little lag in some titles. On the A21S it happened a lot with Asphalt 9, but he did better on PUBG.

What you should know is that you will have limited experience with both but if you are a casual player you will not be annoyed by this. We give each one point in performance. Which has more battery? The A21S! It brings 1,000 mAh more than the A30S, but does it make a difference in practice? In our tests we had an average of four hours longer which is a very significant difference. None will give you two days of autonomy, but the A21S comes even closer to that. The recharge time is exactly the same with both. You will have to wait just over two hours to have the battery completely full. The Galaxy A21S takes one more point here. The A20S has four cameras at the rear and the A30S has only three. In addition, the latest model comes with a higher resolution sensor. Does this guarantee better photo quality? Not so much. The Exynos 850 is weak to handle 48 MP and we see more noise and lower textures. The A30S tends to saturate colors a lot due to the artificial intelligence that comes on by default. If you disable the feature you will have better pictures than on the A21S, especially at night. The larger focal aperture helps the A30S a lot, while the ultra-wide is the same in both and can register good photos in well-lit places. The differential of the A21S is for the macro camera. It can be useful at times, but the low resolution compromises the photos. The lack of auto focus also doesn’t allow you to get too close to what you want to photograph.

It is an interesting extra, but it will be useless in many cases. Finally, there is a depth sensor on both, which generates a good blur effect on both. We give the A30S a point for better photos with the rear cameras. In the A30S we have a more advanced front camera, either in resolution or focal aperture. This helps to capture more details of the skin and suffer less in darker places. And that is exactly what we saw happening. Depending on where you take your selfies you will have quality cell phone entry to the A21S. However, Portrait Mode has a good cut and few flaws in both. The A30S takes the best in selfies. In the camcorder we have a more fierce dispute. Both record at maximum Full HD with the rear cameras and front-facing ones. The quality is similar, as is the focus speed. The A30S shakes a little less, but the A21S records louder and cleaner audio. If you plan to use your cell phone to shoot at night then you will be disappointed with both. We give each point a camcorder. The Galaxy A30S was launched in 2019 in Brazil for R$ 1,600, while the A21S arrived in mid 2020 for R$ 2,000. An inferior and more expensive cell phone? Yeah, that’s Samsung’s mindset. But also, with the rise in the dollar, everything has gone up in price in recent months. Currently both can be found for a similar price but you’ll see the A30S on offer more often as it’s an older model. It even cost less than R$ 1,000 and it will be a while before we see the A21S at that price. Thus, the cost-effective point goest to the A30S. In theory the A21S should behave like a cell phone inferior to the A30S and we can confirm that it is really that’s what happens. The older model has better screen, sharper sound, faster charging speed of apps, better cameras and extras even brings Digital TV. It is usually found for less, which makes its cost-benefit more interesting. The advantages of the A21S are for the best multi-tasking performance and with some games and longer battery life. It will only make sense when it costs on average R$ 200 less than the A30S. If the price difference between the two is less than that, go for the older model without fear.