The Galaxy A11 is the successor to the best-selling Android phone in 2019. In our review, we saw that the new Samsung basic phone got better but can it outperform the K40S, which is the king of cost-effectiveness among entry-level phones? That’s what we’re going to check. When talking about basic cell phones, you can’t expect much from the design. Here we have two simple devices with a body made of plastic with similar build quality. The LG K40s, being older, still has a traditional notch and the A11 bets on a hole for the front camera, which became a trend in all segments. The LG device is more compact and resistant. It brings military certification that guarantees greater durability in falls and a greater chance of surviving in extreme temperature environments. And it also has an extra differential, that is the button dedicated to Google Assistant which helps when doing a quick search. In connectivity, there is an advantage in the USB-C port of the Galaxy, while LG’s still comes with the old micro USB, but on the other hand, it brings Bluetooth 5. If you are looking for a basic phone with Wi-Fi 5 GHz or gyroscope, then neither will suit you. We start by giving each one a point since none stands out. One detail where basic cell phones usually struggle is the screen. The A11 and K40s have simple LCD panels, but they are far from being considered bad. 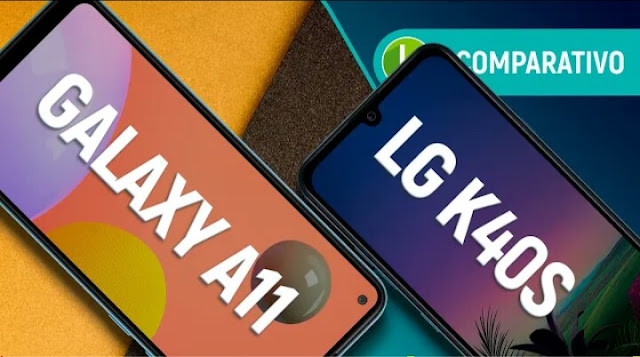 The Galaxy has a slightly brighter brightness, and that makes it the best choice for those who use the phone a lot on the street. LG’s screen has a slightly higher contrast, which makes black less gray. and gives more vividness to colors. The viewing angle is similar in both, as well as the level of reflections from the glass. There is only one sound outlet at the bottom of each device. The A11 has a slightly louder sound for exaggerating the treble and when the volume is at maximum It distorts much more than the K40s. None is a good option for listening to music, but the LG does a better job especially with the headset that comes bundled with it. DTS:X is supported, which promises a more immersive sound – just don’t expect too much of it. We give the screen a tie and an extra point to the K40s in the sound part. One point that LG has been disappointing is in the software support. The K40s hit the market with Android 9 Pie and still no update for Android 10. LG has not even given a deadline of when we can see the update coming out to its basic phone. It is really disappointing. Samsung has been doing more than that. The A11 arrives with Android 10 and should be upgraded to Android 11 if we consider the good update history recently. Even cell phones on the discontinued J series are getting attention from the company. But in terms of features, which one is better? We can say that the interfaces of both have many differentials and the usefulness of each feature will vary from person to person. However, LG’s software presents less lag than Samsung’s and this will be a good differentiator for many. And we continue with one point for each. The A11 comes with old hardware present in some members of the Galaxy J series, the Snapdragon 450. The K40s also doesn’t have a very current chipset and LG has been keeping the Helio P22 even in its 2020 launches. But which one is better? In our standardized multitasking speed test, we had an advantage for the LG model. This is where well-optimized software makes a difference when opening and reopening applications and games. In benchmarks, it was the opposite and the Snapdragon managed to get higher scores. If you are looking for a good phone to game and don’t wanna spend much, you will be satisfied with what both deliver. Of course, don’t expect to run everything smoothly.

The A11 and K40s have some gagging on Asphalt 9 and heavier games, but it will please casual players. We give the K40s a point for better overall performance. The A11 brings 500 mAh more battery and even if it has a bigger screen it still manages to yield 15% more. It’s not really a big difference, but the more time you spend away from the outlets the better, Isn’t it? And this is another point where Samsung’s basic phone has an advantage: it comes with a more powerful charger which makes its battery recharge 40 minutes faster. This gives the Galaxy A11 a double point. We have a 13 MP camera on both with a small advantage for the larger focal aperture on the A11. This should help with night shots, but none stands out with their rather dark photos. When shooting during the day we have a better balance between brightness and color in the K40s. Its ultra-wide camera also has superior quality and suffers less in darker places. If you are a fan of saturated colors you will enjoy the artificial intelligence of the LG camera. It makes the colors more vibrant and even gives a tan effect to the skin. The Galaxy has an extra third camera that serves to use portrait mode with objects. The K40s takes point for better rear cameras. At the front, we have a higher resolution camera on the K40s, but it does not deliver superior clarity to the A11, at least not in daytime selfies. Both are able to record good photos and have an efficient portrait effect. It is at night that the LG takes advantage and struggles less from loss of sharpness and noise. It is also possible to use artificial intelligence to correct backlight overflow and even give a tan tone to the skin. And one more point on camera for LG. We have videos in Full HD with both, either with the rear or front camera.

The quality of the footage is similar, with a slightly more agile focus on the K40s. None have good audio capture quality, but Samsung’s phone has metallic noise in the voices, which makes your rival deliver a cleaner sound. And as we are talking about basic cell phones, there is no electronic stabilization, so wait for shaky videos. Of course, filming at night will be tricky with them. We give the K40s a point for being a little better for filming. The Galaxy A11 arrived at a hefty price of R$ 1,700, while the K40s was launched in 2019 for R$ 1000 and it’s a lot cheaper than Samsung’s basic phone. Of course, as it’s a more recent launch we’ll still see the Galaxy drop in price, but it will take time to get close to what is in the rival of LG. With that, we give the point of cost-benefit stays with the K40s. Yeah, my friends, the LG K40s remains the best cost-benefit among the basics. Okay, the A11 is a recent model and its price will drop over time, but as much as it gets to stay in the rival value, it will still be an inferior product. The K40s is more resistant, its screen displays better colors, the sound distorts less, its lagged Android flows better and the camera set delivers better photos. The A11 has its positive points with its most current design, higher screen brightness, it comes from the factory with Android 10 and should be upgraded to 11, in addition to delivering longer battery life and charges faster. If the camera is not that important to you, it could be an interesting purchase when it’s at the same price as LG’s phone.