If you are looking for a good and cheap cell phone there are some interesting options on the market. Of the most basic Samsung devices, we can indicate the Galaxy A10S, but there is the LG K40S that has been giving A hard time for its fellow countrymen – which Korean phone delivers the best value for money when it comes to entry-level devices? That is what we will discover in this comparison . 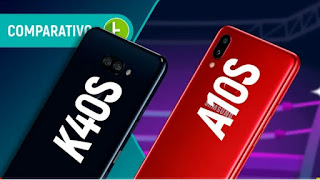 We started with the design, and from the front, we see that the two are very similar with a drop-shaped notch and wider edge below the screen. They are the same size, but Samsung’s device manages to be thinner and lighter even if it has a bigger battery. In addition, the edges are a little thinner, which makes the A10S deliver a little more screen-to-body ratio. The build quality is the same, with the whole body made of plastic. None stands out here and the finish at the rear is also similar, with smooth plastic that makes the phone slippery. The K40S arrived in black and blue options, also available for the A10S, however Samsung’s phone also has a more striking red tone option. Both have a biometric reader at the rear – the K40S is more agile and fails less LG’s phone has an extra button dedicated to Google Assistant, located on the side. In terms of technologies, there are no differences. None has USB-C or Wi-Fi 5 GHz. With none to stand out, we will draw here at the beginning. The A10S has a little more screen with the same resolution as the Korean rival. Samsung saved and adopted a simpler LCD panel, while LG chose a good IPS LCD screen for the K40S. The Galaxy A10S can even achieve a slightly higher brightness but the image quality on the K40S is better, with high contrast and more calibrated colors. In Samsung everything is washed and there is no option to adjust the colors.

In the sound part, we have only one speaker in each. The sound is mono, not very powerful, and the quality is only average for both. LG’s is a little better at that, since it doesn’t overdo the treble, but on the other hand, the sound of the A10S gives the feeling of being louder. Both have headphones in the box and the accessory couldn’t be simpler. Can you hear music? You can, but we recommend investing in a better quality headset. The K40S takes point for having a better screen and the duo tie in audio. One UI or modified Android from LG, which do you prefer? Each has its differentials with features that can be useful or not will depend on the needs of each user. The problem with Samsung’s interface is that it weighs more than LG’s, and we see more constant gagging on the A10S. At least Samsung is agile in updates and has already started releasing Android 10 for the Galaxy A10S in some countries. And when will the K40S receive this update? In the case of LG, you will need to have more patience. It is one of the slowest manufacturers in Android updates, and we will probably only see the update get here by the end of the year. We will then make another draw. 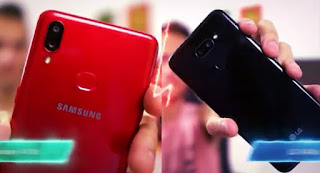 But which one delivers better performance with apps and games? Both bring the same MediaTek platform, the Helio P22 chip. Does this mean that we have an equal speed? This is where we see that 1 GB more RAM makes all the difference. Not to mention that LG software makes better use of hardware. In our standard multi-task speed test the K40S was 1 ½ minute faster opening and reopening applications. In practice, this means that A10S not only takes longer to load applications but you also can’t hold them in the background, making the experience slow It’s frustrating. Just to prove that the fault is not the hardware, but the software, the two achieved similar points in benchmarks, including the highly acclaimed AnTuTu. And in games? The PowerVR GE8320 is a basic GPU that can handle lighter games well but on heavier titles, you’ll have to play with the graphics setting on the bass, or Call of Duty. And we give the K40S a point for having better overall performance. The Galaxy has 500 mAh more battery and this favored the autonomy in favor of the A10S. The two manage to deliver battery for the whole day, but Samsung’s still has a bit of charge left for the next day. And if you use it more heavily with games and videos the A10S has a better chance of reaching the end of the day with charge, and the best part is that it also spends less time in the socket. Sure, it takes both of them more than two hours to reach 100%, but at least, you won’t have to expect that much time with the A10S. And with that, we double-point the A10S for better battery and shorter recharge time. 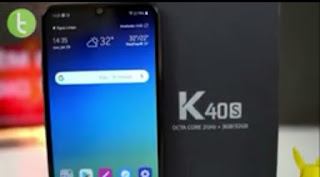 Both have dual cameras at the rear. Samsung decided that a depth sensor would be more useful while LG bets on a camera with a wide-angle lens. What is the best? The K40S can take good pictures with a blurred background, then you’ll hardly miss a dedicated sensor for that. The K40S secondary camera allows you to capture more of the scenes without considerable loss of quality. Only the color tone changes a little, but the results are good. In open and well-lit places the two take good pictures already indoors and with milder light is where the K40S stands out. He suffers less from noise and his focus works better. Shooting at night will be equally frustrating on both – basic phones suffer from very dark photos and none here is saved from that. The LG has extra artificial intelligence integrated into the camera, which makes some color corrections and tends to give the skin a tan effect, which will please iPhone fans. For having a better camera we give the K40S a point. LG’s phone has a front-facing camera with a higher resolution. This does not always mean that the more pixels the best are selfies, however, in this case it’s just what we have. The K40S records more skin details, suffers less from loss of sharpness at night and artificial intelligence it can even help save the photo when there is a very strong backlight, such as when shooting at sunset. The background blur is also better on LG, there are fewer flaws in the crop while the Galaxy usually misses when blurring the shoulders, ears, or even part of the hair. And the K40S takes one more point on camera. Para vídeos não espere muito de nenhum dos dois – ambos gravam em Full HD com qualidade similar and suffer a lot at night with very dark videos. Samsung’s phone shakes more and has a lower captured audio quality. The front is also slightly worse on the Galaxy and shakes even more than the rear camera. It’s a shame that the K40S camcorder is not as good as its photos, but overall, it is a little better than the A10S’. And we ended the camera part with another point for the LG cell phone. 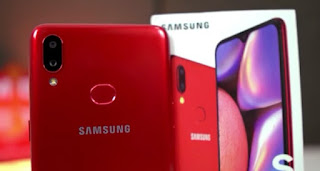 So far we see that LG’s basic device is a better phone overall and its lower price makes the situation even more complicated for Samsung. They hit the market at around $ 60 each, but currently, the K40S is almost $ 12 cheaper – we will hardly see Samsung’s getting cheaper than LG’s and even if your price drops and both are at the same value LG’s will still deliver better value for money.

And with that, we give the last point of the comparison to the K40S. LG really got it right with the K series and has been giving work to rivals when it comes to a good phone at a fair price.  And the K41S is already arriving pplll, which will make the fight even more interesting between the two Koreans. If you want the best basic device, go for the K40S. It has a better screen, much higher performance, and better cameras. Its battery may not last as long as the A10S, but it lasts all day. LG just needs to streamline system updates and bring Android 10 to the K40S soon. Take the opportunity to comment below: which Korean brand is doing better in the entry-level cellphone segment Samsung or LG? I’ll stick around, a big hug, and see you next time.