The demand for smartphones in the national market is on the rise. And if there is something else that is on the rise is the number of launches of Samsung’s Galaxy A series. After launching the entire first generation, it has now announced the successors S or 1. With price drops a while after launch, the Galaxy A30S, even newer, it was a little more affordable than the Galaxy A50 – do they look alike? With prices so close, which one should you invest in to go for a better purchase? You’re in luck because in this comparison today we’re going to put them side by side. Follow it here: 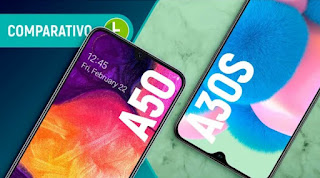 QqqIn design, they are really very similar to the point of being virtually the same size thickness and weight. At the rear, the cameras are arranged in the same way, a vertical traffic light in the module jumped on the body. Even the logo is in the same place. The difference is in the visual finish of the plastic rear. While in the A50 it is a velvety holographic shine, in the A30S it has a diamond pattern that shines in different ways according to the angle of light. Both are beautiful. The body is also made of plastic and there is no sign of protection against water or dust. Both are dual-SIM with a separate slot for MicroSD and the notch is slightly different. On the A50 it has a “U” shape and on the A30S, a more traditional drop shape. The buttons are on the same side of the rounded and shiny body and the fingerprint reader is under the screen being very slow on both phones. We couldn’t have anything but a draw here. Since these two smartphones are the same size, their display also has a lot of similarities. Both are 6.4 “with Super AMOLED technology and 19.5: 9 aspect ratio with the same 85% screen usage. However, the Galaxy A50 takes the best by having Full HD + resolution against only HD + of the A30S and this is the Achilles heel here – they both have great shine, they do well in the sun, they have vibrant colors and good contrast. But the Galaxy A30S, due to its lower resolution, causes images to lose sharpness and even show jagged edges if closely watched. The A50 does not suffer from this problem, so the point here is exclusively for the Galaxy A50. 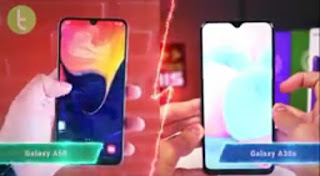 ANone of these smartphones is stereo and although they maintain the P2 connection, the headphones that come in the box are the same – the most basic possible from the brand. They are accessories with low performance and the sound quality is poor. In external audio the two are also quite the same, there is a good sound power, but this is done by sacrificing the clarity of details and the quality of the sound itself, so they tie in poor sound quality. They will also look alike in the system. We’re talking about two Samsung phones, two devices that came with Android 9 Pie pre-installed but that have already been updated to Android 10. The update of the two is not confirmed for Android 11, but taking into account the latest actions that Samsung has taken, they are very likely to reach Android 11. Android 10 arrives with One UI 2 interface from South Korea, entitled to things like themes and Dark Mode, in addition to less usability for one-handed use on larger screens. It is an interface with many features. Also, the two still feature the built-in Digital TV but they lose the NFC. In the rest, they are also identical in connections, with Wi-Fi and Bluetooth including FM Radio. We ran into another draw. At least in this regard we will not have ties

The processor of the A50 is older, an Exynos 9610 but it is more robust, while the A30S, the Exynos 7904, is newer and less powerful. The A30S came to Brazil in the version of 4 GB of RAM and 64 GB of storage, while the A50 arrived more complete, bringing the same 4 GB of RAM more with 64 GB or 128 GB of internal space – we also have, cannot forget, the MicroSD card slot. Knowing that the A50 is more robust as a whole, we have unsurprising results. In benchmarks, the oldest model is 18% better, but it is worth remembering that these tests we did in different versions of AnTuTu, according to its release date. In our app opening tests, the A50 did 8 seconds better than its rival. In games, you can’t expect the maximum requirement of any of them, but the Galaxy A50 will also perform a little better in terms of graphics quality and speed. Still, the Galaxy A30S runs most titles smoothly if they are not at the maximum of the graphics. 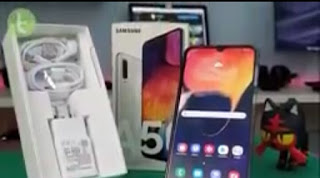 Another point that remains with the Galaxy A50 Battery is another area where they have equal numbers, at least initially. Both have 4,000 mAh power in the body, however, the less demanding HD screen of the A30S with a more economical processor, bring better results. While the A50 was 10 minutes of 18 hours of autonomy, the A30S managed to pass 15 minutes of 19 hours, almost an hour and a half more. A little over an hour of screen time was also what the A30S achieved. In the recharge, we have an inversion. Although the two come with a 10-Watt fast charger, The A50 shows faster and is just under two hours to reach 100% against almost two hours and 10 minutes on the A30S with an 18-minute difference. An hour and a half more battery life is a plus, so we have the first point of the A30S here.

QInterestingly we managed to have the same triple set of cameras here we have a 25 MP main wide with f / 1.7 aperture, an 8 MP ultra-wide and a 5MP depth sensor. With the main lens in good light, the two even bring very good photos, which will burst a little in brighter colors like the sky. In the A30S the artificial intelligence present can make photos extremely intense in color and on the A50 the HDR works best indoors. As we have a wide-angle here, it has good quality in open places for the A50 but on the A30S you will see a huge difference from the ultra-wide lens to the main lens. In environments with less light, the two will bring little details and a lot of noise normal for this price range. The depth sensor works well here on these two devices but it brings a much higher cut in the A50 that goes beyond even the quality of some more expensive smartphones. These two lenses show that the most powerful processing makes the difference, so the point is the Galaxy A50. Another plus point is also for the A50 when filming – it has digital stabilization and even if he doesn’t shoot in 4K, he has a good quality, with less shake and a good audio capture. The A30S also shoots in Full HD and has a decent audio capture, but is inferior to the A50 then the point is for the A50. In selfies, the sensor of the A50 is 25 MP against one of 16 MP of the A30S. This, combined with a more powerful processor, leads to better photos. Both do well in dark places but the A50 brings better light management and guarantees a less bursting background. The last point of the photos is of the Galaxy A50. 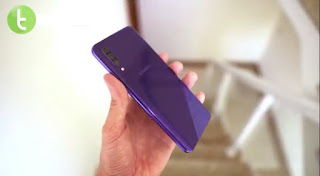 Ppopoo Price is the motto of this comparison. The two arrived in 2019 and with prices, a little high compared to to what they offered. The A50 arrived in Brazil for 1 $ 120, while the A30S also arrived salty costing $ 100. Time has passed in more than six months and now the Galaxy A50 is at  $ 100 for the A30S while the A30S can be found for an average of $ 80. It is worth noting that we had an increase in the value of both here, which even in March cost up to 30% less The point remains with the A50 for the work as a whole, showing that it is has a better value for the money.

We are left with a very clear victory for the Galaxy A50 – if you are interested in Samsung smartphones and you cannot spend more than$ 100, it is still one of the best options in line A. it is still a very good product in 2019 and was only criticized because it came to a very high price in At the time, updating it to Android 10, it is still a good choice, even better if it downloads more. Its successor, the Galaxy A51, is doing well in sales but he only wins on camera and it costs a little more. The A30S is a good option only if you find it for promotion below  1$ 60. It already outperforms the Galaxy A30 and can please at a more favorable cost-benefit ratio for it but if you know how to wait for a Galaxy A50 promotion, you’ll be much more satisfied. Which one would you keep? Would you spend a little less to go from A30S or invest a little more to have better features? Tell us here in the comments!