GALAXY A31 VS MOTO G8 PLUS|| DETAILED COMPARISON:

The Galaxy A31 is Samsung’s latest launch in the middle-tier segment and despite being a nice cell phone, it suffers to deliver a good cost-benefit this due to its high price. Is it worth paying what Samsung asks for it or are there other better options from other brands like, for example, the Motorola Moto G8 Plus? That’s what we will help you discover in this comparison. 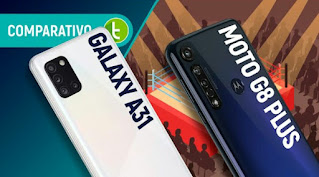 GALAXY A31 VS MOTO G8 PLUS:DESIGN

Despite being recent launches, both models escape the 2020 trend to bring the hole at the top of the screen, and here we have a drop-shaped notch. The Galaxy A31 is slightly bigger but has a larger screen and thinner bezels. The curious part is that the Moto G8 Plus is thicker, even if it has a smaller battery. However, both have a similar weight. If you are looking for the most comfortable to use then whatever you choose will work the same applies to build quality, which is similar in both. The Galaxy A31 has a more attractive design, with holographic effect and three color options blue, white, and black. Motorola has a gradient effect in two options: blue or red. The G8 Plus biometric reader is at the rear and is more responsive, while the Galaxy A31 is on the screen and is more comfortable to use. None excels in connections and bring similar technologies. As much as they are products with different prices, they deliver the same quality. We then started our comparison with one point for each model.

GALAXY A31 VS MOTO G8 PLUS:SCREEN

The screen of the Galaxy A31 is slightly larger and features a Super AMOLED panel against the Motorola IPS LCD. Samsung takes advantage of two points: brightness and color. If you use your phone a lot outside the home you will prefer the Galaxy. AMOLED technology also takes advantage of the dark themes of applications to help save battery and also reduce visual fatigue. If the Moto G8 Plus loses on the screen department, in sound it gives a beautiful lesson to its rival. 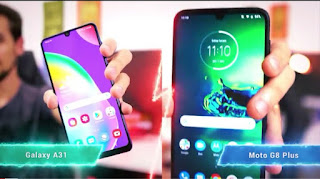 GALAXY A31 VS MOTO G8 PLUS:SOUND

It’s weird how Samsung doesn’t pay attention to the sounds of their smartphones and even devices that reach the market for  $230 range lack stereo speakers. This is what sets Motorola apart and the Moto G8 Plus not only has stereo sound but the quality is very good. It is also better for listening to music with headphones. It has a more powerful and cleaner sound, being the best intermediate we tested in the last few months in this regard. So we give here a tie in multimedia – the Galaxy A31 wins on screen, while the Moto G8 Plus wins in sound.

GALAXY A31 VS MOTO G8 PLUS:FEATURE

Which do you prefer, Samsung’s modified Android or the cleaner version sent by Motorola? Samsung was once one of the slowest in Android updates but it looks like the game has turned in recent years. The Galaxy A31 comes out of the box with the latest version of the little robot, meanwhile, the Moto G8 Plus continues with Android Pie. No flawless delivery and it is common to notice small gagging with heavier applications. The difference is for the features – on the Galaxy A31 there are several as well as a greater possibility of customization On the Moto G8 Plus, you have only the same gestures present on other models of the Moto G line. The Galaxy A31 then makes a point of having more complete software and being more updated. 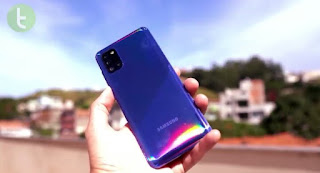 GALAXY A31 VS MOTO G8 PLUS:PERFOMANCE

The Galaxy comes equipped with MediaTek’s Helio P65 chip, which is not so popular as the Snapdragon 665 that has been equipping most of the intermediary phones launched in 2019 and also in 2020. Which one is the better? Well, in our standardized speed test Motorola makes Samsung “eat dust” We had a difference of 46 seconds in opening applications and games. In benchmarks, we also achieved higher scores with the Moto G8 Plus however, the difference here has been a little smaller. It’s clear that it’s not just the hardware that’s at fault, but that Samsung hasn’t paid as much attention to optimizing the software. At least, the Galaxy A31 does not disappoint in games and managed to run all games that we tested with the same fluidity as your rival. You can even risk putting HD graphics high in the PUBG game without suffering from lag. But in overall performance, Motorola’s cell phone takes the point here. The Moto G7 Plus had a pretty bad battery but Motorola fixed this problem by including a bigger module in its successor. However, it’s not as big as the Galaxy A31’s 5,000 mAh, and as expected, the Galaxy delivers greater autonomy, reaching a difference of 20%. Don’t worry, the G8 Plus delivers autonomy for the whole day the advantage of the Galaxy A31 is that you won’t have to recharge it every night before going to sleep. Speaking of recharging, none gets to be very fast, but Motorola spends less time on the plug for having a smaller battery. And for that reason, here we have another tie. The Galaxy A31 delivers a bigger battery, but the G8 Plus recharges faster. So far our match is tied but we will see if they break on camera.

GALAXY A31 VS MOTO G8 PLUS:CAMERA

If you consider only the number of lenses, the Galaxy A31 is at an advantage, for having an extra camera. The main one of them brings the same 48 MP sensor, but as we have different lenses and hardware, the quality of the photos is not the same. One point that MediaTek hardware needs to evolve is precisely in the treatment of images. The Moto G8 Plus records better photos, whether in white balance, color fidelity, or sharpness. Of course, you won’t always have perfect pictures and the Motorola camera shows its limitations in places with weaker light, but always shows better results than the Galaxy, especially at night, because it has Night Mode. Its ultra-wide camera can only be used for videos, while the Galaxy A31 can be used for photos. Both have a depth sensor that works well and has few flaws. Samsung’s camera has an extra macro camera, which records good photos with a high level of detail. And then we are still in a tie – the Moto G8 Plus captures better photos but the Galaxy A31 has more versatile cameras. At the front, we have higher resolution on Motorola and it really can shoot great daytime selfies. The Galaxy A31 takes good pictures and does not disable HDR when Portrait Mode is activated. It takes advantage in darker places, especially at night when the quality the front camera of the Moto G8 Plus drops a lot. You can use the screen flash to try to minimize the drop in sharpness, but if you want the best for nighttime selfies, it’s the Galaxy A31 you should choose. And we finally broke a point for the Galaxy A31 in selfies.

GALAXY A31 VS MOTO G8 PLUS:VIDEO

Looking for a cell phone to shoot in 4K? Then forget the A31. It is unacceptable that such an expensive device only records in Full HD. It also has no electronic stabilization and does not offer a slow-motion option. It is a limited cell phone for filming, but it has an agile focus and good audio capture. This is where we see the advantage of the Moto G8 Plus ultra-wide camera. It allows you to record horizontally while holding your phone vertically. The videos are good quality and do not suffer from the shakes seen on the Galaxy A31. And here we go back to the tie with a point for the Moto G8 Plus. We reached the last item of our comparison with the Galaxy A31 and Moto G8 Plus tied. 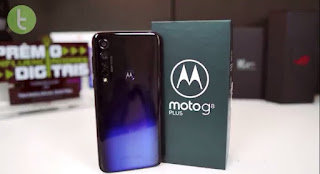 GALAXY A31 VS MOTO G8 PLUS:PRICES

And now, which one should you choose? Pick the cheapest one. Motorola’s intermediary device hit the market at the end of 2019 for $ 150 while its Korean rival arrived in 2020 for $ 180. And not satisfied, Samsung even raised the price to $ 230 in its official store. Currently, there is a big difference in price between the two with the Moto G8 Plus being cheaper. And with that, we give the last point to the intermediary of the Motorola brand.

GALAXY A31 VS MOTO G8 PLUS:CONCLUSION

If the Galaxy A31 cost the same amount as the Moto G8 Plus it would be a fair price but it’s not worth paying more for it just for the most current and complete Android, the brightest screen or the best battery life. The Moto G8 Plus is more game with its superior performance, quality stereo sound, camera that takes better photos and more advanced camcorder. Its battery may not yield as much, but it lasts all day and recharges much faster. What is disappointing is Motorola’s delay in releasing Android updates. And Also, take the opportunity to comment if you think it is worth paying the difference to take the A31 home or do you prefer the Moto G8 Plus? I will wrap up here, a big hug, and see you next time.