The Galaxy A31 is Samsung’s latest bet in the intermediary segment and arrived at a very high price for a device that is far from being considered premium. Does it deliver cost-effectively or are there more interesting options on the market like the Redmi Note 8? We will discover this in this comparison. 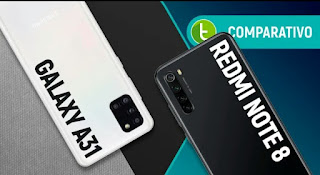 GALAXY A31 vs REDMI NOTE 8:DESIGN

When a manufacturer asks for $ 120 through an intermediary you expect it have a better finish – Samsung thinks differently, and even devices for twice that amount arrive with a plastic back. Is this bad? Well, if you want to feel a premium phone in your hands, you’ll probably prefer the Redmi Note 8 with its glass back. When you hold it you feel that you have a more expensive product in your hands, while the Korean rival delivers The same feeling of the most basic device from the A-series. If that doesn’t matter to you and you only want the most compact, then you will also prefer the Chinese model. In weight, they are practically the same, despite the difference in materials in construction. The two adopt a drop-shaped notch. On the Galaxy, we have slightly thinner bezels which allows you to have a bigger screen without making the device too bulky. At the rear, we find both bringing good color options and flashy effects. There are four cameras in each, changing only the layout that is more discreet on Redmi. Do you prefer biometrics on the screen or at the rear? If you want convenience, you will prefer the Galaxy but if you prefer agility you can pick the Redmi. 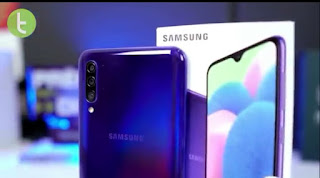 GALAXY A31 vs REDMI NOTE 8:FEATURES

In terms of connectivity, we have an advantage for Samsung on Bluetooth 5 while Xiaomi’s device brings infrared to use the phone as a universal remote control. Which one wins? We will set a draw since each one has its highlights. Which one has the best screen? The A31 comes with a Super AMOLED panel that delivers a slightly stronger shine and more vibrant colors – aren’t you a fan? Okay, the Redmi Note 8 screen is also good but don’t expect the same “perfect black” from the Galaxy, which not only reduces eye strain when using your phone in the dark How to help save battery in black-themed apps. On the sound side don’t expect stereo sound, there’s only one speaker on each with more powerful sound in the Chinese model, but none deliver balanced audio. There is an excess of treble that distorts when the volume is at maximum. The A31 comes with a headset, the same accessory present in entry-level models from Samsung. It’s such a simple headset that it’s not even worth using. If you are going to invest in a good quality headset, Redmi delivers a better listening experience. And in multimedia, then, we give point to the screen of the A31 and point to the sound of the Redmi Note 8. The Galaxy A31 arrives with Android 10 and One UI 2.0 and should be upgraded to Android 11 in 2021. The Redmi Note 8 is still on Android Pie and will soon receive Android 10, but we will hardly see the Chinese model go beyond that. The two interfaces bring a lot of features with the one from Samsung offering a little more customization. On the other hand, you can download the Mi Remote from the Play Store to use the Note 8 like am universal remote control and the feature works very well. And here, we give the point for the Galaxy A31. 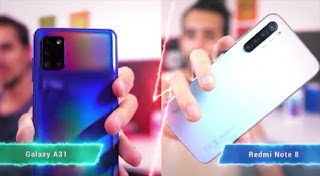 GALAXY A31 vs REDMI NOTE 8:PERFOMANCE

Samsung comes with MediaTek hardware and Xiaomi with Snapdragon 665 platform. Which wins in performance? In our speed test, we saw the Note 8 perform faster than the Helio P65. Even with 4 GB of RAM, the Samsung model ended up not holding all applications in the background. The fault may not be even the hardware, but the Korean’s lack of attention to the device’s software. In benchmarks, we have a small advantage for the Note 8, which may indicate that the Helio P65 it was not a wise choice from Samsung for the price charged on the device. At least it doesn’t affect game performance and they both run well all games available for Android. We give Redmi a point for being faster overall. The battery is where the game is reversed and we have a much better autonomy on the A31. Of course, for that Samsung had to put 1,000 mAh more battery but it is enough to make the Galaxy deliver cargo for two days. Note 8 yields enough for an entire day, as long as you don’t play too much or spend the day on YouTube or Netflix. And even with the bigger battery, the A31 spends the same time on the plug of its rival. With that, we give the point to the Galaxy for having a better battery.

GALAXY A31 vs REDMI NOTE 8:CAMERA

Both bring a 48 MP camera, the difference being only for the largest focal aperture on the Redmi. This helps the Xiaomi model to record better photos at night, while on the Galaxy everything comes out very dark In addition, the Note 8 has a night mode, which helps a lot when shooting in places with poorer light. But during the day, which one wins? We can say that the two are equally competent. Galaxy records photos with more vibrant colors, while Redmi has more realistic colors. The ultra-wide and macro camera is better on the A31, while the blur works better on the Note 8. Point for each in photos. The A31’s 20 MP front camera can capture more detail in selfies it has good color registration and does not saturate as much as the rear cameras. Overall, it’s a great camera for taking selfies in sunny environments, indoors, or even at night. The front-facing camera of the Note 8 is also very good, but the photos come out a little smoother especially in darker places. If you take selfies more at night you will prefer the Galaxy, but on the other hand, Redmi does a better job portrait mode and has fewer flaws. Here we give a point to the Galaxy A31. The Redmi Note 8 is capable of recording in 4K, while the A31 is limited to Full HD only. The Samsung model has more shakes since it does not have electronic stabilization like the Chinese rival. If you are a fan of slow-motion you will also prefer Redmi, as the A31 does not even have this feature. The only point that the Korean model is better at is capturing audio. With that, we ended the camera part giving a point to the Redmi Note 8. 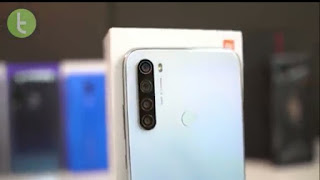 GALAXY A31 vs REDMI NOTE 8:PRICE

We have reached the most important point for most: which is the cheapest? The Redmi Note 8 could be found for just over  $ 60 at the beginning of the year, but with the rise in the dollar, its price went up a lot but it is still below what Samsung asks for on the Galaxy A31. Keep in mind that the model sold by Xiaomi itself here in Brazil costs more than $ 120 and this is the amount to pay to have a national warranty. If that doesn’t matter to you and you want the cheapest, then the imported Redmi Note 8 is the best choice. And so we ended our comparison with a draw.

GALAXY A31 vs REDMI NOTE 8:CONCLUSION

The Galaxy A31 arrived at a hefty price and currently costs more than the Redmi Note 8 on national retail sale, is it worth paying more on Samsung’s mobile You get a design with thinner edges, AMOLED screen, greater autonomy, better camera for selfies and more up-to-date software, but for many Note 8 can be a better deal because it is more accessible, and have a better finish, deliver better sound, be faster, have a better night camera and shoot video with superior quality. And that is where your needs come in to make the right choice. Take the opportunity to comment below which one you choose, Xiaomi or Samsung? I wrap up here, a big hug, and see you next time.