GALAXY A50 VS MOTO G8 PLUS:|| would you rather go for UPDATES or BATTERY LIFE? | Comparison

Two successes from the two largest manufacturers the Galaxy A50 was replaced in less than a year with the Galaxy A51, Motorola’s Moto G8 Plus replaced the Moto G7 Plus in even less time. These are two of the most popular intermediaries at the time of purchase, with prices that can be below $ 90, and the doubt ends up appearing: which one is better for you? What is a best buy? Follow us here in this comparison. 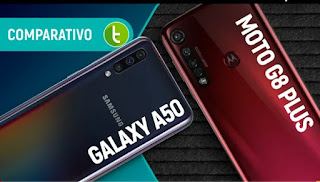 GALAXY A50 VS MOTO G8 PLUS:DESIGN

In these two phones the companies opted for the shiny plastic on the back and the same material in the body. They also use visual effects like differentiating with something more holographic on the A50 and gradient finish on the G8 Plus. Motorola left the round camera module on the G7, and adopted the vertical traffic light of its One line and the same practiced also by Samsung with the A50, only more striking and protruding, with a larger camera separate from the main module. The Galaxy A50 is lighter and thinner than the Motorola, but the overall size is about the same between them. There is no water protection on the Samsung, but the Moto G8 Plus brings the resistance against splashing water. The notch is drop-shaped for both. Both are Dual-SIM and the A50 brings the cradle with slots independent of the third which can be occupied by the MicroSD, while the G8 Plus is hybrid. On the A50, biometrics are more practical placed in the front and below the screen, but they’re slower. In the G8 Plus they’re located at the rear and are faster. The latter, the G8 Plus, also has a more rounded body and a better grip, while the body, less curved than the A50’s, is more elegant. The A50 is lighter and thinner and the G8 Plus has some water resistance, so they tie. 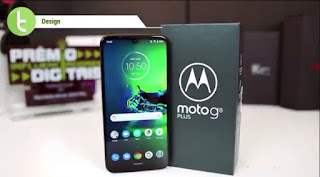 GALAXY A50 VS MOTO G8 PLUS:SCREEN

The screen size is almost the same for both, with 6.3″ for the Moto G8 Plus and 6.4″ for the Galaxy A50. Being the same size, the screen-to-body ratio is better on the Samsung, which has a large chin like the one from its rival, but a slimmer upper bezel. The Full HD+ resolution is the same for both and the main differences are in the presence of Gorilla Glass 3 for the A50, in addition to its Super AMOLED technology, while the G8 Plus still has IPS LCD without any protection. IPS itself is not a bad technology, but the one used by Motorola usually brings some half-darkened edges, and the brightness is not very strong, being lower than the competitor’s. The A50 does better outdoors and it has more intense colors. The A50 aspect ratio is 19.5:9, a little bit longer than the 19:9 of the G8 Plus, so the point on the display goest to the Galaxy A50.

GALAXY A50 VS MOTO G8 PLUS:SOUND

Motorola has invested more in audio, so its speaker above the screen is larger and complete, altogether with the bottom speaker, a stereo set, with the A50 being only mono. The Samsung device even has a decent power but the sound quality is disappointing in clarity and detail. At least Moto G8 Plus’s sound doesn’t disappoint – in addition to stereo speakers, there is also Dolby Atmos technology for greater immersion when watching movies. The sound power is very good, as well as the quality delivered. It also has settings for wireless sound and it also brings better headphones, bundling in the box comfortable earphones with good sound, and both devices have the P2 input. A50’s headphones are just like the ones found in the basic M series. They are simple and with a low power, so this point goes to the Moto G8 Plus. 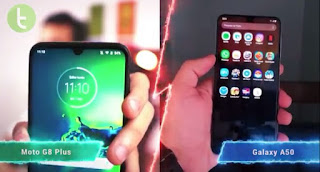 GALAXY A50 VS MOTO G8 PLUS:FEATURES

They are two Android phones, but because each one is from a different manufacturer, we have distinct interfaces the A50, like the G8 Plus, comes out of the box with Android 9 Pie pre-installed, but the smartphone from Samsung has already received an update to Android 10, and it is likely that it will still be updated to Android 11, while we are still waiting for the update to Android 10 on the Motorola device. This one has a simpler interface, with fewer features and delivers an easier experience. The highlight of it is the Moto App, which brings some special gestures for system control and navigation extras, like shaking your hand to turn on the camera. The Android 10 of the A50 arrived with the South Korean One UI 2 interface, with a dark theme, and better usability for one-handed use on larger screens. It is an interface with many features. In connectivity, the basics are covered by both Wi-Fi ac and Bluetooth 5.0, but the Galaxy A50 wins because it also has the built-in digital TV, compass and ANT +, which is a protocol for health-related devices. None of them has NFC, so, in this regard, the A50 takes the lead and scores the point.

GALAXY A50 VS MOTO G8 PLUS:SPECS

A classic clash here between Snapdragon against an Exynos, as you love it. And what will be the result? On the A50 we have an Exynos 9610 with 4 GB of RAM and 64 or 128 GB of storage. The Moto G8 Plus brings the Snapdragon 665 also with 4 GB of RAM and 64 GB of storage. In a less technical translation, that is, benchmarks, the Moto G8 Plus wins the numbers being 15% better in different versions, however, in the opening tests we have opposite results because the A50 does better, and the numbers show that Motorola is stumbling on system optimization. This becomes clearer in games, where the G8 Plus performed better in titles than Samsung’s device, performing with a superior fluidity. On the A50 it is possible to use the graphics at maximum, but the fluidity will not be the same, giving that we have a less powerful less powerful GPU here. And even [being] faster in multitasking, the A50 lags behind the rest compared to the G8 Plus, that ends up taking that point. Both smartphones arrive with the same number on the battery – 4,000 mAh, but one of them does better in overall autonomy, and this is the Moto G8 Plus. At almost 20 and a half hours, it does more than two and a half hours longer than the A50. There are two more hours of active screen too, and the Galaxy A50 only comes out of trouble when charging, spending a little more than  1 hour and 50 in the socket, way better than the almost two hours and 10 minutes of the G8 Plus, but this difference in charging time is not huge, even though considering the A50’s 15-Watt charger and the Moto G8 Plus’s 18-Watt, and they don’t have wireless charging. Then, for lasting longer, the Moto G8 Plus gets the point. 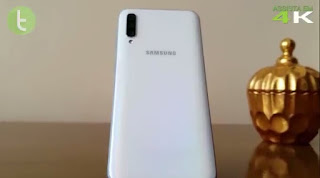 GALAXY A50 VS MOTO G8 PLUS:CAMERA

GALAXY A50 VS MOTO G8 PLUS:PRICES

Finally, in price, the Moto G8 Plus arrived for $120, the same price as the A50, only 128 GB, launched times after the first 64 GB. The equivalent of Motorola’s device is $ 10 cheaper. Currently the values ​​of both are similar, with an average price around $100. A few months ago it was lower, but the high dollar and public health problems pushed all prices up, so they end up drawing on that score.

GALAXY A50 VS MOTO G8 PLUS:CONCLUSION

We have a near-draw here, but the Moto G8 Plus wins. The Galaxy A series is already traditional, but the G one is established. Not that this will lead to the victory of the Motorola cell phone, but the company already knows better what to include to seduce the mid-tier devices audience. Compared to the Moto G7 Plus, this new model is not very exciting, but its price is slightly more cheap that the A50 makes it better. It is the one for those who want to play games, songs or to watch videos, good battery and a camera without much creativity, but that gets the job done. The Galaxy A50, even losing, can still be the choice of those who want a more vibrant screen and brilliant, better updated system with more features and nicer selfies. Both will please the general audience. Do you agree with this result? Do you have an A50 or a Moto G8 Plus? Tell us here in the comments about your experience with them.