Are you interested in a more advanced phone from Samsung but you’re startled by the surreal prices Asked for the S20 Ultra? Perhaps it is more worth investing in its predecessor, the S10 Plus, which currently costs less than half the price. Is there a very big difference between the two that justifies the amount charged? That’s what we will help you discover. Usually, those who enjoy the Plus variants of Samsung phones like to have a big phone.

The S20 Ultra went beyond the Note line, which has always stood out for being the pioneer in phablets. If you want to have a pocket tablet, then you will prefer the latest Korean version because it is bigger. Of course, this has its disadvantages, and the S20 Ultra ends up being “chubbier” and heavier than its predecessor. But it is the price to pay to have a big screen of almost 7″. The bezels are thinner than on the S10 Plus and Samsung abandoned the dual camera on the front, reducing the number of holes in the screen. Another welcome change was the reduction in the curvature of the glass at the edges of the screen. The finish follows the same as before, with aluminum body and glass back. The only difference is that the version of Gorilla Glass on the back of the S20 Ultra is more current, both have IP68 certification with the same level of water resistance. The biometric reader is on the screen and is a little more agile and accurate than before. The design at the rear has changed a lot, instead of having the cameras horizontally aligned in the central part, now they are in a giant block that resembles the Pixel series. 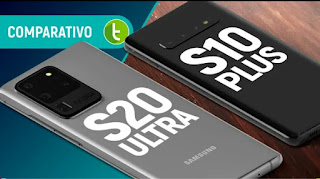 And a technology present in the S10 Plus that died in the Ultra was the heart rate sensor but perhaps what should be missed by some is the P2 headphone jack. We started our match with one point for each model. Both have Dynamic AMOLED screen, the difference is that in the S20 Ultra we have a more current generation that achieves stronger brightness and has better color reproduction. If you use the phone a lot outside the home you will prefer the Ultra, also because it has less curved edges that have fewer reflections than the S10 Plus. Another big difference of Samsung’s latest device is the 120 Hz refresh rate. It is only available in Full HD resolution, but it delivers more fluidity in the system animations in exchange for shorter battery life. There is stereo sound on both, with a slightly higher volume on the S10 Plus. The older model from Samsung also has a more balanced sound, while the Ultra bet sub-bass and generates a more muted sound. The bundles earphones are the same as AKG, the difference is only for the connection, P2 on S10 Plus and USB-C on the S20 Ultra. For music lovers, we can recommend both, but the oldest manages to keep the volume louder with more advanced headphones. In multimedia we give a draw, the S20 Ultra has a better screen and the S10 Plus takes point in sound. On the software side, there is not much difference between the two, especially after Samsung released the One UI 2.1 for the S10 series. What changes from one to the other is that the most current allows you to have animations of the system running at 120 fps which gives a feeling of greater fluidity. The S10 Plus arrived with Android Pie and should receive Android 11 next year as its latest version of the system, while the S20 Ultra is yet to be upgraded to Android 12. If you want to spend more time with the same phone, this can be a differentiator in favor of the S20 Ultra. And the most current one gets one more point here. Did we have a good performance evolution from one generation to another? The national S10 Plus came with Exynos 9820, while the S20 Ultra brings the latest Exynos 990. Let’s put aside the controversy about Samsung’s hardware being inferior to Qualcomm’s and focus on which of these two is faster. We perform our usual speed test by opening and reopening apps and games to measure loading times of content and also the RAM management. As you would expect from more current and powerful hardware, the S20 Ultra is the faster of the two with a difference of 7 seconds. Is it that much? Nope! It could be better, but the other models in the S20 line are slower, even if they have the same platform – in benchmarks here we have a bigger jump between generations and in AnTuTu it is possible achieve a score of up to 50% higher. In games, we also have an advantage for the S20 Ultra, which is capable of running some titles at 120 fps thanks to its 120 Hz screen. And we give the S20 Ultra a point for having better performance. Does the giant screen of the S20 Ultra compromise its battery? It has 900 mAh more than the S10 Plus and that is enough to deliver superior autonomy. The difference is small between the two, but both deliver battery for the whole day of use with a few gaming, videos on YouTube and some selfies. Now if you are going to abuse the 120 Hz mode of Ultra, then you will have a battery life shorter than the S10 Plus. The difference in consumption will depend a lot on what you are doing on your cell phone. Games running at 120 fps are the biggest villains and you may experience a 25% autonomy drop. The good news is that the Ultra takes less than half the time to have your battery recharged so even if you make a point of using the screen at 120 Hz all the time, you will have to wait for less than 1 hr to have the battery full again. And the S20 Ultra cores a double point, as it has better autonomy and also shorter recharge time. 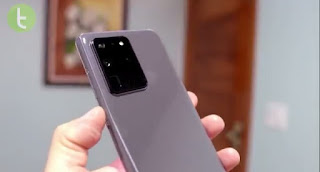 In cameras, we had a huge jump, at least in numbers. After years of “reheating” the same 12 MP sensor, Samsung inaugurated its new 108 MP sensor on the S20 Ultra – we’ve seen Chinese phones delivering this same level of resolution, and again it is clear that having a 108 MP camera is not as impressive as it looks. By default it does not capture photos at full resolution, instead, it compresses 9 pixels in one to generate a 12 MP photo. As we have more information registered in the same space, the photos of the S20 Ultra present greater sharpness of objects that are far away, but you will only notice this if you zoom out. For use with only social networks the quality is quite similar between the two, however the S10 Plus works best with HDR and strikes a better balance between light and dark points in a scene. Samsung has been trying to fix this on the S20 Ultra with each update, as well as focus, which does not always get the point it should focus on. Another advantage is the longer-range zoom on the Ultra, which reaches 100x. The quality isn’t that good, but it’s better than the more limited zoom on the S10 Plus. The older wide-angle camera has less quality loss compared to the main camera and also struggles less at night. Here each one takes a point for each camera to have its highlights. At the front is where the S20 Ultra stands out from the rest of the S20 line with its 40 MP camera. Not only does it record more details, but it also struggles less in dark places then the camera of the S10 Plus. If you like blurring the background of your selfies, then you can choose anyone that will have good results. But as the S20 Ultra’s camera records more details, you’ll have less grain when using Portrait Mode at night. And then we have one more point for the S20 Ultra for being better for selfies. Leaving the cameras aside we also have a more advanced set on the S20 Ultra camcorder that is capable of recording videos in 8K. The quality is superior to videos captured in 4K, but the fluidity is inferior, since the cell phone is limited to shooting at 24 fps. With the front, it is possible to shoot in 4K at 60 fps on Ultra and only 30 fps on Plus. Night videos come out a little darker on Ultra. Stabilization has evolved and manages to reduce shaking even further. While the focus is not as precise as that of the old model. In the audio capture, the two do an excellent job. And one more point for the S20 Ultra here. 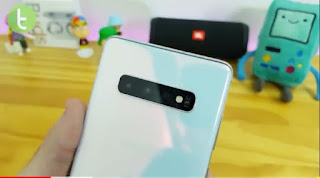 Yes, the S20 Ultra is superior almost to the S10 Plus, and it really seems to be a logical exchange. But perhaps what makes you change your mind is the exorbitant price. It arrived costing $480 in its simplest version. Currently, it can be found by just over $ 420, but that is $ 250 more than what the S10 Plus currently costs. Is it worth? The S20 Ultra is better, but not so much that it justifies this absurd price difference.

It is more logical to pick the S10 Plus that is more cost-effective today. And with that, we end by giving the last point of comparison to the S10 Plus. If money is no problem for you and you are looking to have the best of Samsung, then the S20 Ultra will be the best choice for having a higher screen, better performance, longer battery life, shorter recharge time and better cameras. Not to mention that it will receive Android updates for longer. Now, if you value ​​your money, you can save some cash and pick the S10 Plus. It may not be as good as the most current, but super on the sound side and also takes great pictures it does well on screen, has good performance, its battery yields well and brings almost the same features of the S20 Ultra, for those who do not want to record in 8K or apply a 100x zoom. And we want to know what you think of the price charged for the S20 Ultra. It’s fair? I’ll stick around, a big hug, and see you next time.