If you are looking for a Motorola mid-range phone you may have seen that the Moto G8 Power and the G8 Plus are about the same price. “So, which one to buy?” you ask me. Well, that’s what we’re going to find out in this  comparison where we will analyze the points positives and negatives of each model to know which one is more worth your money. 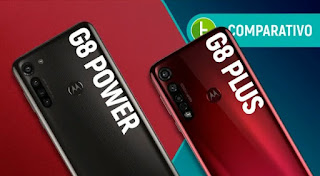 G8 Power and G8 Plus are the same sizes, the difference is that the Power is fatter and heavier due to the bigger battery. It has a more current design with a hole in the screen, unlike the Plus which still adopts drop notch. The best part is that it delivers thinner edges and allows for a larger screen in the same space. At the rear, they are very similar, with a set of cameras that look like an inverted exclamation. The Power has an extra camera and the flash is closer to the edge. Both are available in blue, despite the different shade. The Plus variant can also be found in red and the Power one in black.

In terms of connections the two are virtually identical – the only difference is that Plus is supported to 5 GHz Wi-Fi. The build quality is also the same: the whole body made of plastic with a glossy finish that streak easy. The biometric reader is at the rear and works well on both. As each one has its advantages, we set it a draw at the beginning. 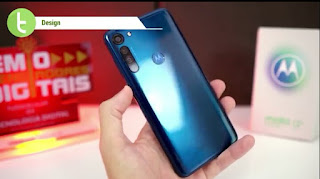 The Power has a little more screen, but in return, its IPS LCD panel delivers brightness and contrast slightly inferior than the Plus’. You will notice a more grayish-black in it. In color calibration, by default, the Plus has a more bluish-white, but this can be corrected easily by changing the calibration profile in the screen settings.

In the sound part, we have stereo audio in both. It is good to see Motorola expanding this in its line of intermediaries. The Power is a little more powerful, but the fact that it has a more forced sound for the highs gives that sense of superiority – especially when watching videos on YouTube. Plus, on the other hand, has a more balanced sound between bass, mids, and treble. The headset is the same that accompanies the two. It is a comfortable accessory that offers good sound quality. If you want to get the most out of these devices for music it will be worth investing in a high-quality headset. And if you are an audiophile, you will like the Plus more because it has less distortion with headphones. We give the Moto G8 Plus a double point for having a better screen and sound.

When it comes to the Moto G line there’s not much to talk about software we have the same features as always. The interface is very clean, very close to Android Pure and brings the Moto app with some gestures that you should already know such as turning your wrist to open the camera or shaking your phone to turn on the flashlight. Because it was released last year, the G8 Plus still comes with Android Pie and goes on without Android 10 that already comes standard on the G8 Power. Motorola is not one of the fastest to update and there is also no guarantee that such devices receive Android 11 someday. Anyway, if it guarantees at least one update for each then the G8 Power is at an advantage. We give G8 Power a point for coming with the latest software. 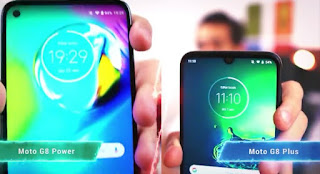 We have Snapdragon 665 with 4 GB of RAM in both, can we declare a performance draw? Calm down! Theoretically, it should be the same, since even the screen resolution is practically the same, however, in our speed test, the G8 Plus was faster even with the G8 Power optimization feature turned on. If you disable to save battery then it will be even slower. In benchmarks, we also had slightly higher numbers in the Plus variant this difference doesn’t even reach 10% in tools like AnTuTu, so don’t even worry about it. Game performance is similar in both. Don’t expect impeccable fluidity and even games like Asphalt 9 has some gagging. For being faster, we give a point to the G8 Plus. Power is synonymous with battery and the G8 line would be no different. It has 1,000 mAh more than the G8 Plus, and as expected, delivers greater autonomy. In our tests, we had a 25% difference in battery life between the two If you want one that lasts all day then whatever you choose, but if you want to spend the weekend away from home without taking the charger, so the G8 Power has a better chance of surviving two days. As both come with the same 18-Watt TurboPower charger, the G8 Plus ends up passing less time in the outlet for having a smaller battery. And there is the question: do you prefer a cell phone with more autonomy or one that recharges faster? We set it a draw – the Power battery lasts longer while the Plus battery recharges faster.

Which has a better camera? The G8 Power wins in quantity but the G8 Plus outperforms in quality. If you are looking for the best photos, whether in detail, colors, HDR or lighting it is the Plus you must choose. It also does better at night because it has a night mode that is missing in the other from Motorola. The advantage of Power is that its ultra-wide camera can be used for photos while Plus’s is limited only to videos, as we have in the One Action. There is also a dedicated macro camera and a telephoto lens with optical zoom. That is, the G8 Power set is more complete and versatile but if you just want the best photos then choose Plus. Here we will set a draw since each set of cameras has its advantages. At the front, we also have a camera with a higher resolution on the G8 Plus. It manages to outdo Power in selfies, but only in well-lit places. It is curious to see how much the quality drops when you try to take a selfie at night. You can use the screen flash to minimize loss of sharpness and excess noise, but the result it doesn’t get any better than the G8 Power. We set it a draw – Plus is better for selfies by day and Power wins at night.

The two shoot 4K videos, but if you’re looking for stabilization, you’ll have to shoot in Full HD. Plus does better at this, with much more stable videos when you shoot with ultra-wide not to mention that you can hold the phone vertically and the video will be recorded in the landscape orientation. Its focus is more agile than that of the G8 Power and suffers less when shooting at night. Both capture good quality audio. We ended the camera part with a point for the G8 Plus. 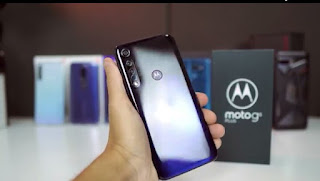 The Moto G8 Plus hit the market in late 2019 for  $180while the G8 Power was launched in the beginning of 2020 for $170. As it is older, it is possible to find the Plus for a lower value today, that is, you have a more advanced phone and still pay less for it – which makes its cost-benefit superior. And with that, we finish our comparison with the last point going to the G8 Plus.

In the past generation, the Power model was much lower than the Plus variant, but this time the difference it’s not that big. The problem is the little price difference, which makes the G8 Plus the best buy without a doubt. It has a better screen, superior sound, it’s faster, it spends less time on the plug, takes better pictures, records videos with superior quality, and can still be found cheaper. Does it make sense to buy the G8 Power? If you care about updates it comes out on top because it already comes with Android 10 You’ll have a battery for two days easily and a more complete set of cameras with optical zoom and macro lens. Anyway, the G8 Power will only make sense if it is more affordable than the G8 Plus. Also, take the opportunity to comment if you think it is worth paying the difference to have a little more battery in the Power or Plus, even with a more outdated system, it’s still a better deal. See you in the next videos. I will stick around, a big hug, and see you soon.