The Moto G8 Power Lite is the latest bet from Motorola and arrives trying to fit in the already crowded G8 family. In our full review, we said that it’s a cell phone that didn’t make much sense but is it a better choice than the Moto G8, the most overlooked member of the new smartphones from Motorola? That’s what we’re going to check out in this  comparison. 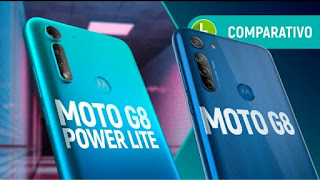 The G8 and the Power variant have a similar design with a hole-shaped notch on the screen. Power Lite adopts an older look, with the traditional drop-shaped notch. It is the largest of the five members, precisely because it is the one who the biggest screen. Because it has a more generous battery than the traditional G8, the Power Lite ends up being a little thicker and heavy. The build quality is similar, with a plastic body on both both can be found in blue, but with a different painting we have subtle stripes on the G8 and a gradient effect on the Power Lite. The latest model can also be found in the color Aqua, which mixes green with blue, while the other has a different white color option. the rear camera design adopts the same standard as the G8 family there are three cameras in each, with the difference only in the position of the flash. The biometric reader is on the Motorola logo and works well on both. 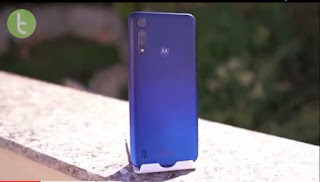 In connectivity we have a great advantage in the traditional G8 – it brings Bluetooth 5 and USB-C connection but if you want to have 5 GHz Wi-Fi then none is right for you. And so, we give the first point to the Moto G8. Do you want to have a Full HD screen on your phone? Then you will be disappointed. Both have an IPS LCD panel with HD + resolution. If you like to use your phone more outside the house in the sun, you will also be disappointed Motorola’s screen has only average brightness, being even worse in Power Lite. The G8 is also better at color reproduction, contrast level, and viewing angle while the Power Lite has cool colors, with the white very drawn to the blue. You can even minimize this problem by changing the temperature in the display settings but it will not be the same as the G8. It is a pity that we do not have stereo sound as in the G8 Power and G8 Plus. These two most basic of Motorola have only one sound output with mono audio. The sound power is superior in Power Lite, and it also delivers a more balanced audio while the traditional G8 overdoes the bass, which results in more muffled sound. The phone that comes with these models is the same as the rest of the Moto G8 line it is a comfortable accessory that delivers decent quality. None stands out when listening to music with headphones. We have a point for each in multimedia – G8 overcomes the Power Line in screen and sound. As expected, there is almost pure Android in both. The G8 comes with the Moto app that offers some gestures but this is missing from the Power Lite. The most basic model supports only two gestures, the first allows you to open the camera and switch between the rear and front facing one when turning the wrist, while the second one turns on the flash to use as a flashlight when shaking the cell phone. The strangest thing is that the G8 was released before and came with Android 10, while the Power Lite is a more recent release and arrived with Android Pie. Motorola has been very disappointing in system updates, so don’t build too much expectation about having Android 11 in these two – especially in the Power Lite. We give the Moto G8 a point for coming with the most current and complete Android.

The Moto G8 comes equipped with the Snapdragon 665 platform, more powerful than the Helio P35 From the Power Lite. And that was clear not only in our speed test, where the G8 was faster at opening applications and RAM management, but also in benchmarks with a wide disparity in the scores. In the case of AnTuTu, we had a difference of 60%. In games, we also have an advantage for the G8. The GPU present in the Power Lite is the same that equips several entry phones. The low-resolution screen even helps deliver good performance on lighter titles however, in PUBG and other heavy games, you can expect a lot of lag. Thus, the Moto G8 takes points for better overall performance. G8 or G8 Power Lite, which is better in battery? The Power series has always stood out in autonomy, but this is not the case here. Incredibly, the traditional G8 delivers better battery life even with 1,000 mAh less. It is a difference of only 5%, but it is curious to see how much the Helio P35 can spend more energy than the Snapdragon 665. Both come with a similar charger, and because they have a smaller battery the G8 is already expected to spend less time in the making. It is a difference of almost half an hour, being an important point for those who are not so patient. Here we give the Moto G8 a double point. There are three cameras at the rear of the two – the G8 has a more interesting set, with ultra-wide and macro one As a complement. The Power Lite, on the other hand, leaves the lens wider aside and adopts a depth sensor. What do you prefer, photos with the whole gang or a better blur effect? Despite having the same 16 MP resolution on the main camera, the G8 records better photos both get good photos in well-lit places, but Power Lite loses sharpness and textures when the light is weaker. Both suffer from noise and dark photos at night, but the G8 does a little better. As for macros, we have similar results in both. We then give the Moto G8 a point for being better at taking pictures with the rear cameras. None takes excellent selfies, especially indoors or when the lighting is not favorable. The G8 suffers less and can even take good selfies, as long as you don’t bother with dark pictures. This can be corrected in any editing software or even on Instagram itself. With the Power Lite, there’s not much to save the poor quality of selfies and even Portrait Mode fails more than the G8. One more point for the G8 for better selfies. The Moto G8 also stands out on the camcorder – it records in 4K, while the Power Lite is limited Full HD. Its focus is more agile, the colors are better and there is less blur. To make matters worse, the weaker model still captures mono audio, which is unacceptable for the price Motorola is asking for it. We then close the camera part with the last point going to the Moto G8. 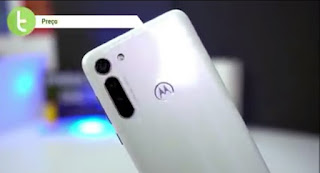 If you thought the G8 was the lost relative within Motorola’s family of mid-rangers, what to say about the G8 Power Lite, which is a cell phone worse in almost everything, and costs more? Currently, the G8 is cheaper and should remain so for a long time. With that, we give him the last point of the comparison. Yes, my friends, we had an overwhelming beating. The G8 Power Lite is a phone that doesn’t make any sense. If you were in doubt between the two, you can choose the traditional G8. In addition to costing less, it has more up-to-date technologies, superior screen, is faster, the battery lasts longer, and takes less to recharge, your cameras are better for photos and videos and even comes with the most current version of Android. Does it make sense to buy the G8 Power Lite? It is only better at the sound part, and it’s not worth sacrificing everything else for it. Either you save and choose the traditional G8 or go for the G8 Plus soon.