MOTOROLA EDGE PLUS VS I PHONE 11 PRO MAX|:

When Apple started asking almost $480 for the basic version of the iPhone 11 Pro Max you must have found it absurd to pay that amount of money for a cell phone. And now in 2020, this ended up becoming our reality, being more and more frequent see launches for that price, as is the case with Edge+. Does Motorola have the moral to charge the same as Apple or the iPhone delivers a better cost-benefit?  What to expect from a cell phone that is so expensive? Both bring great build quality with a body made of metal and glass. 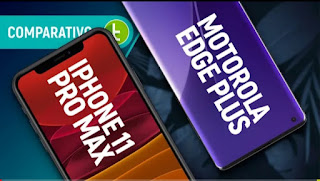 MOTOROLA EDGE PLUS VS I PHONE 11 PRO MAX :SPECS

Apple claims that the iPhone has stronger glass than the rest of the market, but we’ve already seen that it breaks just as easily. However, if you are looking for a water-resistant device it is the one that brings the best protection allowing dives up to 4 meters deep. Motorola’s device … Well, it only survives splashes. iPhone has kept the tired front design for years, with a giant notch that devours part of the screen. The Edge has a bolder look, with a cascading screen that takes care of the sides of the device but that ends up compromising ergonomics, even more, because it is bigger and thicker. At least, it is lighter than the rival. And if you miss the standard headphone jack on iPhone will like to know that it is present in Edge+. In addition, Motorola’s flagship is already prepared for 5G. Biometrics is only facial on the 11 Pro Max and digital integrated on the screen on Motorola. What do you prefer? We will give each one a point at the beginning. We have OLED panel on both, with Full HD+ resolution. If brightness is important to you, you will prefer the iPhone. Now, if you prefer more fluidity, then Edge+ 90 Hz will win you over. With a higher refresh rate, you will see more agile animations and better performance in some games. The curvature of the glass here can be a big weakness, as it increases the reflection index and it can be tricky to use your cell phone outside the home. Even more, because the Edge+ screen is not very bright. In color calibration, we see advantages in the iPhone. There is stereo sound in both, with similar sound power. 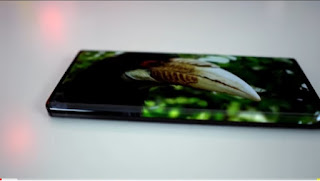 MOTOROLA EDGE PLUS VS I PHONE 11 PRO MAX: REVIEW

The iPhone drowns out more in the bass, while the Edge+ stands out in the treble. None delivers perfectly balanced sound but in general, we find the Motorola audio cleaner. What disappoints is the phone that comes with it, the same as the Moto G8 line. But we have to admit that the Apple phone is no big deal either. At least there is a P2 input on Motorola to use any other phone without an adapter. We give one point each regarding the screen and an extra to the Edge+ in sound. The Edge+ comes with Android 10 and Motorola promises two updates of the little robot and this is much less than Apple, which guarantees several years of iOS updates. So, if you plan to spend a lot of time with your cell phone, you already know which one to choose. And which one has more resources? Motorola’s Android is one of the cleanest we have. The Edge+ even allows you to customize system icons and fonts, but it’s not at all complex like on the Galaxy series or MIUI. The differential is for the customization of the edge. You can add shortcuts to applications and features you use often or create light effects for when you receive a notification. However, iOS is better in fluidity and integration with social networks – in software, Apple takes advantage. We’ve already tested other phones with Snapdragon 865 that performed great opening and reopening applications and games – that is, in multi-tasking. But this is not the case with Edge +. Motorola phone takes a while to load content of our standardized test, being 12 seconds slower than its rival on the first lap. 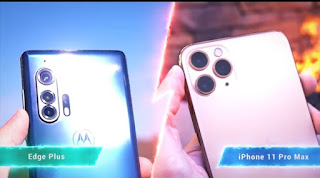 The good news is that after everything is open in RAM the two perform similarly with the iPhone a little ahead for having more fluid animations. In benchmarks, we have victory for the iPhone in some tests and for the Edge+ in others. In AnTuTu we even got higher numbers with the Motorola, which shows that the Snapdragon 865 Is not behind the A13 Bionic. And in games, does the Edge+ 90 Hz screen make a difference? There are few games that take advantage of the superior update rate. And some games like Asphalt 9 run with less fluidity than what we have on the iPhone. A nice feature of Motorola is that you can configure L and R triggers for the edge which helps a lot in shooting games like PUBG. in performance, we will give each one point. In battery, who wins? You may already be imagining that the iPhone will get the worse of it. The 11 Pro Max is among the best autonomy flagships of those we tested and managed to obtain four hours on average more battery life. Our test was performed in the standard mode on each device, that is, the Edge + had the screen at 90 Hz. If you switch to 60 Hz mode you will have a little more battery, but not enough to overcome the iPhone. However, the big disappointment is for the charger that Motorola provides with the device which makes it take half an hour longer to be recharged compared to the rival. Who could imagine? We give the iPhone a double victory in autonomy and recharge time. Motorola is yet another to join the new fashion of the 108 MP camera. Do so many pixels surpass the iPhone 12 Pro Max’s only 12 MP camera? The Edge+ doesn’t seem to handle so many Pixels. It delivers worse photos than the iPhone in most scenarios.

MOTOROLA EDGE PLUS VS I PHONE 11 PRO MAX|: CONCLUSION

The balance between light and shadow doesn’t work in places with strong backlight and even if you use HDR you will not be able to save your photo. The ultra-wide camera also suffers from light and records darker, washed-out photos. But if you’re a macro fan, this is where the Edge+ stands out. It uses the telephoto lens to zoom in on the subject and take better pictures than the iPhone. Even the long-range zoom results in cleaner photos. At night the quality drops a lot on the Motorola and we have pictures with distorted colors. Night Mode doesn’t help and Portrait Mode even works well in bright places but in general, the apple device wins. iPhone 11 Pro Max wins a point here in the rear set of cameras for photos. Is Apple’s phone still better at selfies? Motorola even tried, and the Edge+ you will get good photos with the front camera. Portrait Mode doesn’t fail so much, however, it tends to sacrifice dynamic balance leaving the image background a little blown out. At night you’ll have better selfies on 11 Pro Max. The photos come out clearer and with less noise and flaws. The iPhone also shows the better performance when shooting selfies. While other phones with Snapdragon 865 record videos at 8K Motorola was more conservative and limited Edge+ to 6K resolution. Still, it’s superior to the iPhone, which only records in 4K – but higher resolution does not mean better quality. The 11 Pro Max captures more details, has better stabilization, and a more agile focus. At night Motorola records clearer, but grainy videos. The front camcorder is also inferior on the Edge+. And one more point for the iPhone on camera. 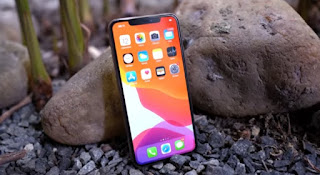 MOTOROLA EDGE PLUS VS I PHONE 11 PRO MAX: WHICH ONE YOU BUY

The two arrived for $480, but now they can be found for around $360 in promotions. It’s good to remember that Motorola has 256 GB of storage, while the basic 11 Pro Max has only 64 GB. If you want to have the same amount of memory as Motorola you will have to pay  $ 480 more on the Apple model. It will be normal to see the Edge+ price drop more in the coming months which is good for those who intend to buy there at the end of the year. But the advantage of the iPhone is that it devalues ​​less, so you will have less loss when you sell it in the future – we end with one point for each. If you have a lot of money to spend on cell phones, now you know which top of the line to choose. The iPhone 11 Pro Max is waterproof, has a brighter screen, and better color calibration. Its software is more optimized and has support for several years. The battery lasts well and still recharges faster, who knew. Its cameras take better pictures and videos, and ultimately, it will devalue less over time. The Motorola Edge+ has its differentials as a more modern design with cascading screen there is P2 input, which is missing on the iPhone, it is possible to run some games at 90 FPS, and it delivers four times as much storage for the same price as the rival.