When we think about high-end cell phones we end up thinking iPhones, Galaxy S, Mi devices LG and Motorola have already stood out in this category and are trying to make up for the lost time. LG, in addition to the traditional LG G8 or G8S, brought the LG G8X, which comes with an extra screen that is detachable while Motorola has finally brought a powerful device to compete among the biggest names, the impressive Edge+. If you want pick a different route and bet on one of these brands for your next investment how about joining us here, in this comparison? 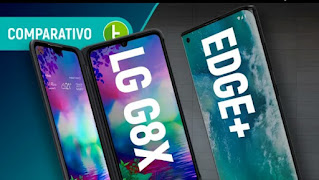 The two manufacturers dared a lot here – The Edge+, right away, draws a lot of attention it is a very thick, long, rounded device with a screen that drips into the corners of the phone. The G8X, without its cover, is an elegant, beautiful, but very common device, but with its case on, it becomes a folding phone. Both have an aluminum frame and a glass back, and in protection, the Motorola has the traditional splash cover while the G8X is not only IP68, waterproof and dustproof, but also has MIL-STD-810G military certification, being the most resistant including the least curved screen. Having a bigger battery, the Edge+ is also bigger, as a whole, heavier and bigger in almost all measures, but it is better being younger and bringing updated notch with a hole in the corner of the screen against a drop, more striking, in LG. The Edge+ is a single SIM device while G8X is a dual SIM one, but it has the second hybrid slot with MicroSD card. If it has the cover on, the G8X is also as clumsy as its rival. Biometrics are below the screen on both but are faster on Motorola. The Edge+ is certainly more different and flashy, but the G8X is tougher and smarter and gets the point. 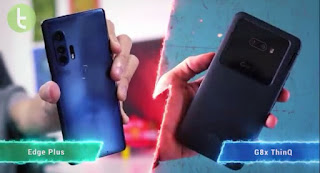 The design leads to two very different screens here – the Edge + is super curved, while the G8X brings those two equal screens. Both have OLED and while Edge + is 6.7″, LG’s is 6.4″. Both are Full HD+. The screen-to-body ratio is much better on Motorola, whose display takes up almost the entire front of the device but both have 19.5: 9 in aspect and in technologies the G8X has HDR10 but Edge + has HDR10+ in addition to also bringing the novelty of the screen with a refresh rate of 90 Hz, making everything more fluid. Protection is Gorilla Glass 6 on LG and 5 on Motorola. Both are good screens with vibrant colors and a good shine for walking on the street but in general, the G8X’s display will do this in a much more competent way with excellent color balance and many adjustments available.

The Edge+ 90 Hz and the G8X’s excellent quality are tied. For audio, two tops of the line that still maintain the nostalgic P2 connection and that also invest in external stereo sound – however, in this last aspect, Edge + does better for having audio comparable to the most famous brands in this regard too, such as Samsung and Apple. LG put the external sound louder on one speaker than on the other, and this ends up distorting more the volume at maximum. On the other hand, LG takes the best by bringing a pair of more quality in the box in addition to having a great balanced sound with DTS-X 3D and Hi-Fi Quad DAC built into the software that brings more bass to the sound as a whole. Os fones do Edge+ são os mesmos do Moto G9 Plus e embora eles tenham uma qualidade interessante they are simpler than LG’s, so it’s a point for LG here. Right away we already swallow dry here because the Android update has not been the strongest of these two brands – even so, the Edge+ already comes with Android 10 from the box and should see update for Android 11 sometime next year, in addition to another for 12, promised by the company. The G8X is from 2019, so it comes with Android 9 Pie, although updates have already popped up around the world, they haven’t arrived here in Brazil yet, and it’s hard for us to see it going from version 10 unfortunately – the security update, for example, is from the end of 2019. The LG UX, the brand interface, has a lot of features and is very similar to Samsung’s One UI. Motorola is gradually abandoning the simpler interface and is putting more and more resources being more modernized, but also heavier. In connections, they are very similar, but Motorola is more modern. Its Wi-Fi is Dual Band, like that of LG, but it brings the new protocol 6. Your Bluetooth is also of a more up-to-date version and although it has space for only a SIM, it is compatible with 5G, so an indisputable point for the Motorola Edge+. 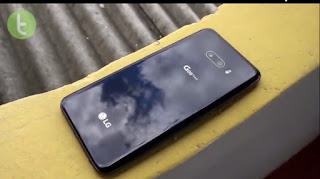 There are two flagships competing here, but the LG 8X is from last year and Motorola is the first to arrive in Brazil with the new Snapdragon 865, in addition to completing its set with 12 GB of RAM and 256 GB of storage. The G8X does not look bad, has the Snapdragon 855, has 6 GB of RAM and 128 GB of storage plus MicroSD, which Edge+ does not have. It turns out that even with two great sets here, the newest Android and the set with more RAM more updated, make a difference. In benchmarks the Edge+ result is almost 70% better, remembering here that they are different versions of AnTuTu – already in our standard app opening tests almost 35% speed makes Motorola faster, showing that even losing in system optimization, it still manages to be faster. For games, no problem with our competitors and they will run smoothly any title you want – the difference is that the Edge + has that 90 Hz screen, which makes games even more fluid. On the LG side, the secondary screen can become an external control for some games so, in the end, the point is from Edge+.

Motorola’s device is not heavy for the sake of being. Its battery has 5,000 mAh while LG’s, with its secondary screen brings 4,000 mAh – but that’s where the 90 Hz screen takes its toll. The tests here that we did were not done with the second screen attached to the G8X. Even with this difference, the two smartphones lasted practically the same 20:45 in our autonomy tests, which is a very interesting result. And when recharging, the two bring a fast 18-Watt charger in the box and the LG ends up doing better leaving 25 minutes before taking, with a total of 2:20. Both also have wireless charging and are faster on Edge +, which also brings reverse recharge function. So they tie because each one has its advantages here. 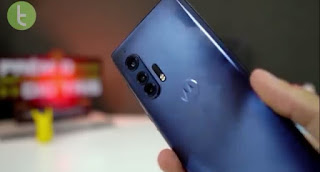 Launched in 2019, the G8X was not yet in that fashion, in that multi-camera arms race like even your companions, like the Velvet or the K61 are inside. So it only has a double set against a quadruple of the Edge+. So the Edge+ has a 108 MP main wide with f / 1.8 aperture, PDAF, and stabilization an 8 MP telephoto, 3x optical zoom with PDAF and stabilization, a 16 MP ultrawide and a 3D ToF sensor for depth. The simplest G8X has a 12 MP main wide with f / 1.8 aperture, PDAF, and stabilization plus an ultrawide of 13 MP. So, the difference we have here in the number of megapixels of the main sensor is huge and although the LG G8X makes very interesting photos, those on the Edge+ are just superlatives. In many respects, Motorola manages to match the best in the category. While the G8X brings a lot of noise in the dark mode and distorts slightly in the ultrawide The Edge+ is better in photos with less light and brings ultrawide with autofocus and less difference for the main – both use HDR well. Motorola also has the zoom lens, which is different from LG, it makes better cuts with its depth sensor and ultrawide sometimes also works as a macro camera. It is more versatile and has better features, so Motorola gets that point.

For videos, Edge + reaches 6K quality, but besides not being 60fps, it also doesn’t record in 4K, which is a big mystery. The G8X can reach 4K at 60fps and also brings 4K to the ultrawide and the front and Motorola does none of that. Overall, LG’s dual image stabilization, as well as audio, are good, while the shooting quality with the main, wide-angle, telephoto and front is also good on Edge +,  but its focus is slow, so the point is the LG G8X. Finally, in selfies, the LG set turns out to be better, with a 32 MP sensor and f / 1.9 aperture against a 25 MP and f/2.0 aperture from Edge+. The G8X recording, as we said, is superior and has electronic stabilization and the Edge+ records great selfies outdoors, but it ends up making the bottom burst when we use portrait mode. The G8X has good pictures, but it has a strange focus and the background cutout can be quite aggressive so, in this last aspect, they end up drawing.

In terms of price, it is not because they are not in the mainstream of line tops that manufacturers abstained to put high values. If the $ 400 ordered by the G8X at the time of launch shock you, the $ 500 from Edge+ so they make you want to cry – not that other brands abuse it less. Now, at least the G8X has dropped a lot in price, although it is already much more difficult to find it to sell. Its current price is  $ 250, already with the second screen, while the Edge +, of more recent launch, it is still around $ 400. It is quite capable that, if it is still available, the G8X will be even lower on Black Friday while the Edge+ is also likely to see more declines, but perhaps not to the point of reaching LG’s level. So, for the lowest price currently, the final point goes to the LG G8X.

This comparison only had the G8X as the winner by the final point of the cost-benefit price. If they cost the same thing, they would tie evenly here, so if you’re in doubt between these two, each one will have its prominence and use. The Edge+ is a more beautiful, more elegant, more updated, good battery, and with great performance. The LG G8X is cheaper, has that second exotic screen, IP68 protection, and is better for audio and videos. It is up to you to decide what you prefer, remembering that you will have to pay $ 100 more for Motorola. Yes, this almost draw was one of the most difficult, what did you think? Tell us here in the comments who do you think should have won this battle? Were we right or it should’ve been The Edge+? And to keep up with prices . I’ll stick around and see you soon.