REDMI NOTE 9 vs GALAXY A31: which MID-RANGE is BETTER| Comparison

The Redmi Note 9 is Xiaomi’s latest bet on the domestic market but is it a better phone than Samsung’s Galaxy A31, which is also a recent launch by the Korean company? One thing they have in common: they cost more than they should. And what you might be wondering is what your money is worth, right? So let’s find this out in this  comparison. 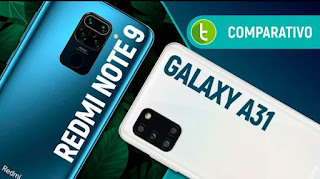 REDMI NOTE 9 vs GALAXY A31: DESIGN

Samsung has been bringing the hole notch to intermediate models present in their flagships but unlike what we have on the A51, the A31 still adopts an older drop notch the Redmi Note 9, on the other hand, has a more current design because it has a hole in the left corner and that is less distracting. Xiaomi prized for more premium quality in its intermediaries with cell phones with a glass back Note 9 has the same plastic finish as the rival. If only the most compact, light and comfortable one-handed phone matters to you, then it is the A31 that you must choose. Now, if you prefer more agile and less failing biometrics, the Redmi Note 9 stands out for its traditional reader at the rear. The A31 has biometrics on the screen, which may look more advanced, but is slower and takes a little while for you to hit the exact location of the sensor. 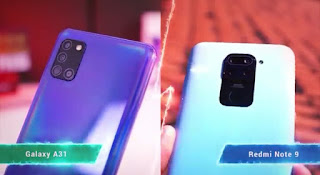 REDMI NOTE 9 vs GALAXY A31: TECHNOLOGY

Ll In terms of technology, you have Wi-Fi 5 GHz, Bluetooth 5, and USB-C on both. The Redmi Note 9 takes advantage for being more complete and come with NFC and even infrared to use the cell phone as a universal remote control. We started the comparison with a point for the Xiaomi device. Want the best screen? Samsung wins. The A31 features Super AMOLED panel with superior brightness, infinite contrast for perfect black and better viewing angle. Redmi maintains the same technology as previous generations, but Xiaomi ended up saving in the panel used and chose one with low brightness and that has poor color calibration. And which is better in the sound part? Both have only one speaker at the bottom the mono sound is not very powerful in either the audio is unbalanced and tends more towards the treble on the Korean model and bass on the Chinese rival. The A31 comes with a headset, the same that comes with Samsung entry phones Sound quality is limited and compromises the experience with music. The two tie in sound and the A31 takes an extra point per screen. Both come out of the box with Android 10 modified – in the case of Samsung we have One UI 2.0 the same present in all the recent Korean releases. Redmi brings MIUI 11, and soon it will receive the new version presented by Xiaomi recently. Each software has its differentials, as in the case of Note 9, which brings the Game Turbo 2 which improves the gaming experience and even measures the FPS rate. It also comes with a remote control application and works with various electronics. In system fluidity, the A31 wins. Each earns a point in the software part.

In hardware, we have a MediaTek on both sides – Helio P65 on the A31 and G85 on the Note 9, which one is better? Technically they are very similar but in our standardized speed test we had a big difference in performance. The A31 was 39 seconds faster at opening multitasking apps and games. In benchmarks is where we see the Redmi’s superiority with an average score of 20% higher in synthetic tests like AnTuTu. And what about games? As we have the same GPU and screen resolution the performance is similar – the Note 9 advantage is in Game Turbo. But the Galaxy A31 takes points for better overall performance. Both bring about the same battery size, with a small advantage of 20 mAh for the Redmi Note 9 but, oddly enough, it delivers less autonomy. How is this possible? We can point out some possibilities like Helio G85, maybe less efficient than P65, MIUI may not be well optimized or the larger screen would be devouring more energy. It is a difference of just over 10% in duration. What matters is that the two deliver autonomy with time off for more than a day. At for the time of recharge, the Note 9 is faster, thanks to the more powerful charger that comes with it. We have one point for each, A31 has better autonomy and Note 9 recharges faster. 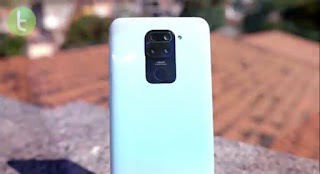 REDMI NOTE 9 vs GALAXY A31: CAMERA

There is a 48 MP camera on both, what changes is the slightly larger focal aperture on the Redmi. This helps the Chinese model to see better in the dark and really what we saw were clearer photos then the A31, not to mention that the Note 9 comes with a Night Mode that helps a lot, this being absent in the rival.The Galaxy already takes advantage of photos taken during the day. It suffers less with noise in closed places and features better color balance and more efficient HDR on sunny days. Both have a wide-angle lens but neither does a good job. The macro is better on the A31 and records more details, while the depth sensor works well in both. We tie for the set of rear cameras of each one. Neither gets to impress in selfies but the Galaxy is the better of the two. Photos taken by the day in well-lit places have similar quality on the A31 and Note 9, however, just the light falls for the quality of the Chinese model’s camera to go along. Portrait Mode crashes less on the A31 and doesn’t suffer from problematic HDR which results in bursting photo backgrounds. We then have one more point for the A31 for better selfies. If you’re looking for a cell phone to record in 4K then you can forget about it – both the A31 and Note 9 shoot only in Full HD, either with the rear or front camera. None has an advanced stabilization system, which results in shaky videos. The focus of the A31 is a little more agile and the audio capture is better. And so, we ended the camera part with one more point for the Galaxy.

REDMI NOTE 9 vs GALAXY A31: PRICES

The A31 initially arrived for $ 120, but Samsung decided to increase the price to $ 145at its official store – which was expensive, got even more expensive. Xiaomi went further and arrived asking for $ 160 for the Redmi Note 9  and that for the version with less RAM and half the storage. If you want to have the model with 4 GB of RAM and 128 GB of internal memory you will have to pay almost $ 180.

REDMI NOTE 9 vs GALAXY A31: CONCLUSION

If you don’t care about the imported product, you’ll be able to pay less than you find at the rival Samsung, but keep in mind that you’ll give up the national warranty and take half of the internal storage. With that, we give the last point to the A31 for being more cost-effective. When we reviewed the Galaxy A31 we said it was not worth the price Samsung is asking and we still think this way. But if you are in doubt between it and the Redmi Note 9 then we recommend choosing the Korean model for being a better cell phone and less cost-effective. You will have a higher screen, more fluid system, higher performance, longer battery life and a better camera for photos and videos – all paying virtually the same as the imported rival and including the warranty and double the storage.