Were you looking for a good mid-ranger to buy and that question popped: Samsung or Motorola? The two companies have a multitude of models for sale in Brazil and this can confuse consumers when choosing.we will help you to list the positive and negative points of the Galaxy A51 and Moto G8 Plus to find out which one is more worth your money. 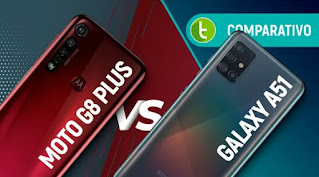 SAMSUNG A51 VS MOTO G8 PLUS:DESIGN

Samsung and Motorola’s intermediaries bet on differentiated design but with the same choice of materials. Both have plastic bodies, either on the sides or at the rear. The Galaxy exaggerates less at the edges and gives a more modern product air The G8 Plus has a more traditional drop-shaped notch, while the A51 has a hole in the screen. They are the same size, with Motorola’s being slightly heavier. Another difference is that in the Korean model we have a biometric reader on the screen itself. In Motorola, the technology is older and is just behind the device. At the rear we have striking colors for both, making it clear that Samsung and Motorola target the younger audience. The G8 Plus cameras have the shape of an inverted exclamation, while on the A51 there is the traditional black block also present in the brand’s flagships. The Galaxy A51 takes the first point for the most current design with fewer edges and for weighing less.

SAMSUNG A51 VS MOTO G8 PLUS:SCREEN

When it comes to the screen, it seems like everyone prefers Samsung’s Super AMOLED, and then that question arises: is the A51’s screen really better than the G8 Plus’s IPS LCD panel? In color reproduction, you will have more vibrant tones in the A51, but if you prefer a closer calibration to reality, it is also possible to have this on the Samsung cell phone, just change the color profile in the settings. The brightness in manual mode is slightly higher on the G8 Plus, however, when in automatic mode the A51 goes a little further in open spaces, which makes it better to use directly in the sun. 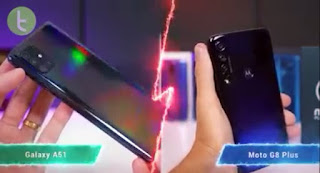 SAMSUNG A51 VS MOTO G8 PLUS:SOUND

In terms of sound, this is where Motorola stands out: the G8 Plus has a dual speaker with stereo sound and Dolby Atmos support. Quality and power are better than the A51’s only mono sound. The Motorola headset that comes with your phone is also better and more comfortable than the Samsung accessory. If you are looking for the best to listen to music pick the G8 Plus. Each takes a point: the Galaxy has a better screen and Motorola better sound.

SAMSUNG A51 VS MOTO G8 PLUS:FEATURES

The Galaxy A51 arrived on the national market with Android 10, while the G8 Plus came with Android Pie and still continues in that version. Usually, manufacturers release only one major update for your intermediate smartphones, which should guarantee Android 11 on Samsung, already on Motorola … The Galaxy has a lot of modified and full-featured software. Many you will probably never use in your life, but they are there to make usability more complete. The G8 Plus has the same gestures present since the first models of the line. Your software is cleaner and better optimized, and then the choice is up to each one. For having more complete and updated software, we give the Galaxy A51 a point.

SAMSUNG A51 VS MOTO G8 PLUS:PERFOMANCE

Motorola decided to bet on Snapdragon 665, the most common hardware in middlemen today. Samsung was on its own chip, the Exynos 9611. In theory, the Korean processor is more powerful, but in practice, it was run over by the rival. In our speed test, the G8 Plus was 7 seconds more agile than multitasking. Does that mean a lot in real day-to-day use? In fact, not so much. But switching between applications is faster on Motorola. Perhaps the fault of Samsung’s slower animations or the lack of One UI optimization. In benchmarks, we also have a small advantage for the G8 Plus. In AnTuTu it gives a difference of 10% in the score, but is this really important? In games, the two do well and deliver similar performance, but the G8 Plus ends up heating up a little more in long gaming sessions – nothing to worry about. The G8 Plus gets a point for having better performance. Both have 4000 mAh battery, theoretically, it should yield the same, but as the Galaxy has more screen it ends up delivering a few hours less of autonomy. Anyway, it is still enough for a full day of use without worrying about taking a charger or PowerBank with you. Despite yielding less, the A51’s battery recharges faster and spends less time in the outlet. It is a pity that Motorola did not keep the same Turbocharger as the G7 Plus. Here we draw: the G8 Plus has a better battery and the A51 recharges faster.

SAMSUNG A51 VS MOTO G8 PLUS:CAMERA

Both devices have a 48 MP camera, the difference is that the G8 Plus has a larger focal aperture, which allows you to take better photos at night – in addition, Motorola has a more efficient Night Mode. If you shoot more during the day or in well-lit places, you will have better pictures with the Galaxy A51. The two also have an ultra-wide camera, but the G8’s serves only as an action camera, that records video with less shake. If you want larger photos to include a larger class, you’ll have to choose the A51. There is also a depth sensor on both, to aid in the blur effect. While the Galaxy stands out for having an extra camera, dedicated to macros. If you like to photograph small details of plants and animals, you will enjoy what the A51 has to offer. For having a better camera, we give the Galaxy A51 a point. And for selfies, which one wins? If we analyze only the resolution the A51’s 32 MP camera could take advantage of the G8 Plus’s 25 MP camera. Both do not use all this resolution by default, as they compress the images to generate smaller files. This compression process is more aggressive on the G8 Plus and results in greater loss of detail. Overall, the A51 records better selfies, especially indoors and at night. On the G8 Plus you’ll even get good pictures, but try to stay close to the light. Galaxy’s Portrait Mode is also a little better and fails less than Motorola’s rival. With that, the Galaxy takes another point for the best selfies. 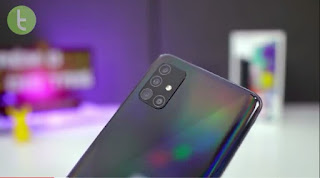 SAMSUNG A51 VS MOTO G8 PLUS:RECORDING

They both record in 4K with good quality – if you want to control shaking well you will have to reduce the resolution to Full HD. The Galaxy usually handles colors and HDR better, making it a better option for shooting during the day. On the other hand, the laser focus of the G8 Plus is more agile. With the front-facing camera, we have similar quality in both. In the audio capture, we have a slightly cleaner sound on Galaxy A51 – here we will draw.

SAMSUNG A51 VS moto G8 PLUS:PRICES

With cell phone prices rising steadily in recent weeks it really gets complicated to invest in a good mid-range device without paying expensively. If you want the more affordable of the two, then the choice is for the Moto G8 Plus which currently costs an average of $ 20 less. For having a better price, Motorola takes a point here. After going through all aspects of each phone, it is clear that the Galaxy A51 it’s a better buy – okay, it’s more expensive, but you get more canvas in the same size, more current design, less recharge time, better cameras, and more updated and complete software.

SAMSUNG A51 VS MOTO G8 PLUS:CONCLUSION

If your budget is too tight, investing in the Moto G8 Plus will not be a bad buy. The Motorola phone has better sound, is a little faster and the battery lasts longer. Your screen may not be an AMOLED of life, but it has good quality. The cleaner software pleases a lot of people, Motorola just needs to be more agile in updates. Now the choice is in your hands, but anyway, we help you find the best prices just click on the links in the description. Take the opportunity to comment below: which one did you choose as the best purchase and for what reason? I’ll stick around, a big hug and see you next time.