SAMSUNG GALAXY A51 VS A71||SPECS AND PRICES:

Samsung launches so many phones that a bunch of them are very similar. This is precisely the case of the Galaxy A51 and A71, which we could say that one is practically the Plus version of the other. Of course, the most expensive one has more advanced hardware but is there a lot of difference or maybe the A51 will deliver better value for money? That’s what this  comparison will help you find out. 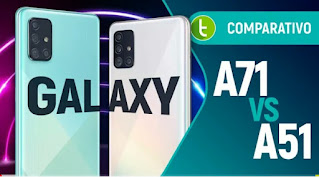 At first glance, it looks like the two devices are identical on the outside with the difference only in size. If you pay attention you will notice that the hole in the A51 is smaller and is a little further from the edge while on the Galaxy A71, there is a larger hole, which is very close to the speakerphone. At the rear, there is the same rectangular block for the cameras, with the lenses arranged in L pattern. Samsung has also adopted a somewhat holographic effect on both with the difference standing for some color options. The Galaxy A51 and also the A71 can be found in blue or black tones while the smaller one also has a white option and the larger one has something more silver-colored. The build quality is the same in both, with a body made of plastic and there is protection Gorilla Glass 3 to the screen. Although bigger, the A71 weighs almost the same as its smaller brother and many should not even notice any difference.

The connections and embedded technologies are similar and the choice will be made only based on your device size preference. With that, we will set a draw at this beginning. The A71 has a larger screen with exactly the same resolution as the A51 but that does not compromise sharpness. Color reproduction is similar between the two, as is the level of brightness in manual mode. However, if you put the brightness on the automatic you will have better visibility with the Galaxy A51 outdoors. Samsung only reserves HDR10 support for its most expensive models, so the company’s intermediaries do not allow extracting all the visual quality that services like Netflix or Amazon Prime has to offer. 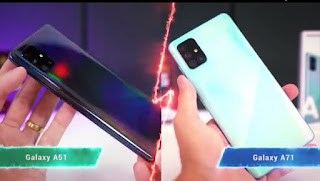 Another disappointment here is the absence of stereo sound, which rivals as Motorola offer. The sound power is decent on both, being slightly better on the Galaxy A71. It also features a better balance between bass, mid and treble and it has less muffled sound than it’s A51 brother. The phone that comes as a gift is a little better on the A71, whether in terms of comfort or sound quality. But if you want to listen to music with all the details, it is better to invest in a superior phone. Here then everyone takes a point on the screen and the A71 gets another point for the best sound. The two hit the market with Android 10 and the second generation of the One UI interface. The features are exactly the same, including the Screen Edge, which allows you to create shortcuts to applications perform actions, access tools, among others just by sliding from the edge of the screen. Dark theme is supported which reduces eye strain when using the cell phone at night and it also helps to save battery thanks to the AMOLED screen that turns off black pixels. And will we see Android 11 on these devices in the future? Well, Samsung has been making sure at least one update of the little robot to its intermediaries, so we can take it for granted this arrival of Android 11 around here. As the two deliver the same experience, we will draw in this regard. 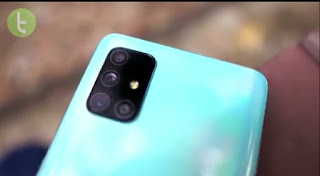 Samsung decided to bet on its own hardware on the A51, the Exynos 9611 platform. While for the A71 she turned to Qualcomm and brought the Snapdragon 730. And as you can imagine, the bigger model has better performance due to the faster processor coupled with 6 GB of RAM. In our standardized speed test, we had a big difference of 43s, this means that the Galaxy A71 is not only faster for loading applications and games but also presents better performance in multi-tasks, being the best choice for those does several things at the same time on the phone. Starting with benchmarks, the difference is big between the two and here we feel the superiority of the Qualcomm hardwarem as in AnTuTu, which even gave a difference of 50% in the score. And in games? Both can run any game available for Android, however, the A71 has a more stable fluidity in heavier titles like Call of Duty For those who enjoy just casual games to pass the time can choose any of them. But the Galaxy A71 takes point here for being faster overall. Samsung has been more generous with battery in its intermediaries and we have 4,000 mAh in the A51 and 4,500 mAh on the A71. A larger battery does not always mean greater autonomy, especially when there is a screen increase. But this is not the case here – the Galaxy A71 has an average autonomy 15% higher than the A51 the two manage to surrender a whole day away from taking, but the longer it lasts, better – another advantage for the Galaxy A71 is that it recharges faster, thanks to the most powerful charger. We then have a double victory for the A71 for having better autonomy and recharge.

Four cameras at the rear became the standard in intermediate phones. We have a wide-angle lens, macro lens and depth sensor in both models but that doesn’t mean the same photographic experience. The Galaxy A71 brings a more advanced sensor that records better photos. There are more details, especially what is far away, and a better balance between brightness and colors without resorting either HDR or artificial intelligence. Night shots are also better due to a more competent Night Mode. The wide-angle lens of the two is similar, however, the photos show less noise at night on the Galaxy A71 due to Snapdragon’s better post-processing. The macro is exactly the same in both, as well as the background blur effect. So we have one more point for the Galaxy A71 for being better for photos in general. For selfies, we expected more from the A71. It has exactly the same camera like the A51 and Qualcomm’s hardware doesn’t really matter here. This is not to say that the photos taken by him are bad, but it is the same quality that the A51 offers. Portrait Mode works decently – sometimes it takes a little bit of hair and ear tips but the separation with the background and the blur level is within the acceptable range. And with that, we set a tie in selfies. They both shoot videos in 4K resolution, but if you want to minimize shaking as much as possible will have to settle for the Full HD resolution that is when SuperSteady OIS technology comes into action. Because it has a more powerful chip and a higher resolution sensor, the Galaxy A71 captures more details and struggles less when shooting at night. It is also possible to shoot with the wide-angle lens and once again the A71 has a small advantage. The focus is agile on both and the audio capture is very good.

This will depend on your needs, as the A51 offers the same features and also has a good set that will please most people. As it is cheaper, it takes our last point in the comparison. We can conclude that the Galaxy A51 is a good phone, be it on screen, cameras or battery however, if you want the best current middleman from Korean Samsung, then the A71 should be your choice. It has superior performance, its battery lasts longer and it recharges faster. In addition to having better cameras for photos and videos. If you find the value a little too salty these days, you might want to wait for a little to see if the difference between the two will get smaller. But it is good to remember that the price of the A51 is also above the ideal right now. If the size doesn’t matter and you’re looking for the best, it’s worth going on the Galaxy A71. Take the opportunity to comment if you think it is worth paying $ 50 more for the A71 or if its better to pick the A51. I’ll stick around, a big hug, and see you next time.