– The Samsung Galaxy Note 20series is finally official and in this video, we’regoing to be putting it up against the best fromApple, which is currently the iPhone 11 Pro Max. What’s up guys, Saf here on SuperSaf TV and we’re going to break downall of the key differences SuperSaf style, the first thingI want to clarify is, yes, that I am aware that therewill be a new iPhone out in just over a month, butcurrently this is the best iPhone that we’ve got, and itshould give us a good preview of what improvementswe’re going to be getting on the iPhone 12 Pro Max or whatever it’s going to be called. So the first thing I wantto talk about is the size. Both devices are big devicesand they are quite similar in size, overall. The iPhone does weigh a little bit more, but the Note 20 Ultrais a little bit taller. 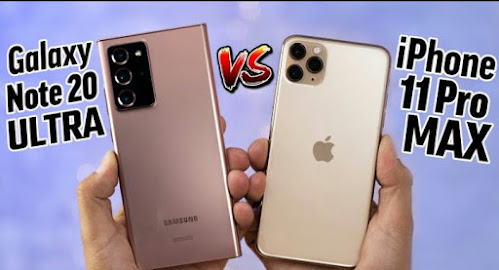 Now it’s a little bittaller because it does have a larger display 6.9inches versus 6.5 inches and it’s also got much smaller bezels with a small punch out forthe front facing camera. The iPhone 11 Pro Maxdoes have those bezels with that notch. This is a design that we’veseen on the iPhone X as well as the iPhone XS so hopefullywe’re going to be getting a bit of an improvement on the iPhone 12. But currently, the Note 20Ultra does give you a much higher screen to body ratioand it does not stop there. It’s also got a high resolution, so the pixel density is slightly higher. It’s not something thatyou’re really going to notice too much, the one thing you will notice is the difference in refresh rates. Although both displays are OLEDdisplays, the iPhone display has a 60 Hz refresh rate,whereas the Note 20 Ultra has a 120 Hz refresh rate. Now this works similarly to the S20 Ultra, where if you do want to use 120 Hz, then you can’t use that full resolution. So you will be taking ahit on the pixel density, but this is a hit that I’mmore than happy to take because having that 120 Hertz refresh rate does make things super smooth. So overall, the advantage for the display does definitely go to the Note 20 Ultra. 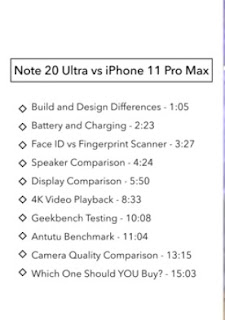 Now, one of the reasonswhy we have that notch on the iPhone is because of Face ID. So not only does that notchhold the front facing camera, it has a bunch of sensorsand this gives you secure facial unlock. The Note 20 Ultra still hasan ultrasonic in-display fingerprint scanner. This is not the 3D SonicMax that was rumored, which I was hopeful for, but nevertheless, it’s a very fast fingerprint scanner. It sits within thedisplay and some may argue it’s more convenient,especially in today’s age, where a lot of us have to wear masks and when you do have a mask on, then unfortunately you can’t use Face ID. Now taking a look at theoverall design and build, the Note 20 Ultra does havemuch more squared off edges to go in line with that Note theme. We’ve got an aluminumframe on the Note 20 Ultra. On the iPhone 11 Pro Max, wehave a stainless steel frame. Now both devices do have glasson the front and the back. On the Note, we do have curved glass, and it’s also going to be thefirst smartphone in the world to have the new Gorilla Glass 7, which is supposed to be moredurable and also less likely to shatter when dropped. I am not a durability expertand I don’t do drop tests or durability tests here in the channel. So I’m sure as soon asthe retail version is out, we’ll be seeing a detaileddurability test from my friend, Zack on JerryRigEverything, sodo stay tuned for that video. Both devices are IP68water and dust resistant and for the iPhone, itdoes come in four colors. 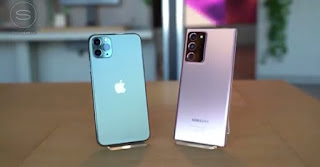 We’ve got a silver, a space gray, a gold, as well as the midnight green. This has a frosted backfinish which looks really nice and doesn’t attract as many fingerprints. The Note 20 Ultra alsohas a frosted finish on the bronze version. So this is not glossyand it looks really nice, but you also get a blackas well as a white version, which do have glossy backs. Now we’ve got slightlydifferent camera modules on both devices as well. We’ve got a square cameramodule with three lenses on the iPhone, and then we’ve got a rectangular camera moduleon the Notes with three main lenses, as well as alaser auto focus sensor. So let’s break these cameras down. The iPhone has three 12 megapixel cameras. We’ve got a primary,we’ve got an ultra-wide as well as a 2x telephoto. Cameras are really good, someof my favorites over the year. I still keep defaultingback to my iPhone’s in many situations. The Note 20 Ultra is lookingto improve on what we saw with the S20 Ultra, so we have a primary 108 megapixel camera. This has been refinedcompared to what we had on the S20 Ultra and alongwith that laser auto focus, it should give us great auto focus speeds, something that was a bit ofan issue on the S20 Ultra. We then have a 12 megapixelultra-wide camera, but finally, we have a 12megapixel periscope zoom camera. 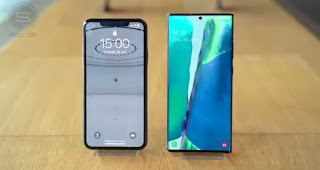 This is going to give usfive times optical zoom, and up to 50 times digital zoom, what Samsung calls space zoom. So I’m definitely gladthat Samsung are not going for the 100x zoom thatwe saw on the S20 Ultra, which really wasn’t thatgood and in my brief testing, it does give you some good results at 50x. Still not something that Iwould post on social media, but nevertheless, having theoption there is quite nice whereas you only get 10xof zoom on the iPhone. So when it does come to zoom, yes, the S20 Ultra does get the advantage here. For the front facing cameras,we’ve got 10 megapixels on the Note 20 Ultra. We’ve got 12 megapixels on the iPhone. Now of course, to reallysee the differences between these cameras, weare going to have to do a SuperSaf style cameracomparison between these two and as soon as I’ve got myhands on the retail unit of the Note 20 Ultra I’ll getworking on that straight away, I promise, so be sure to subscribe and hit that bell icon(bell dings) so you do not miss that comparison. Now, moving on to thevideo, we do have 4K, 60 frames a second across allof the cameras on the iPhone. On the Note 20 Ultra, we do have up to 8K 24 frames a second. This is similar to whatwe saw on the S20 Ultra, but we do have some improvements. Firstly, we do have the Pro Video mode, which is going to giveyou a lot more control. You can get some of those ProVideo controls on the iPhone, but you will have toget a third party app. Something like Filmic Pro, it’snot something that’s default and the Note 20 Ultra now also gives you a lot more control over audio. So you can select a few differentaudio recording options, including one where you’ll be able to use the Samsung Galaxy Buds Live earphones, which have noise cancellationand you’ll be able to get the audio recording from those into the Note 20 Ultra’sPro Video recording app and this is mainly for situations where there’s a lot of background noise and you need that noise cancellation, something that I cannot wait to test out. Now, let’s talk about the internals. What’s powering these devices? Well, the iPhone 11 Pro Max, as you know, is powered by the Apple A13 Bionic chip. It’s a very, verycapable and fast chipset. I’ve really not had any performance issues with my iPhone 11 Pro Max over the year that I’ve been using it andobviously we’re going to be getting an even more improved A14very soon on the new iPhone. 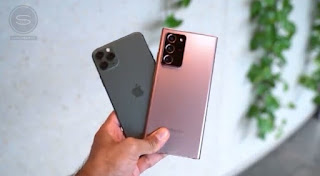 The Note 20 Ultra, there’ssome good news on this and bad news. There’s some good newsif you are in the US and in other regions,because you will be getting the latest and greatestQualcomm Snapdragon 865 Plus chipset, which is the fastest available on the Android side at the moment, but unfortunately, ifyou are in the UK, Europe and some regions in Asia,like I am, then unfortunately you’re still going to have the Exynos 990. Now, what’s quite surprisingis that the Exynos 990 has already been inferior tothe Qualcomm Snapdragon 865, which I’ve covered in detailin my S20 Ultra review. I’ll leave that link in thecards and the description and Samsung has just goneahead and created even more of a gap between the US and other regions, which really does not make sense to me. Now, having said that in day to day, it’s not going to be a massive issue. It’s mainly when you getinto things like gaming and speaking of gaming,Samsung are really emphasizing the gaming capabilitiesof the Note 20 Ultra. They have been working veryclosely with Microsoft, and you’ll be able to getXbox Game Pass on here, which will allow you to playsome really high quality games on the Note 20 Ultra, andyou also have more RAM on the Note 20 Ultra, goingup to 12 gigabytes of RAM. On the iPhone 11 Pro Max, you just have four gigabytes of RAM. Now this may not be noticeable, generally, but there are definitelysituations where I wish that the iPhone had more RAM. An example is, if I’m halfwaythrough posting a story on Instagram and I leave the app, it’s not going to carry onuploading in the background. I’m going to have to go back into the app. So this is really where the Note 20 Ultra gets the advantage for itsmultitasking abilities.

Now that also brings us onto the software because we do have iOS 13,which will be upgradable soon on the iPhone 11 Pro Max. And on the Note 20Ultra, it’s going to come with Android 10, withthe OneUI skin on top. There’s advantages anddisadvantages to both. On the iPhone side of things,you do get that ecosystem. Everything is really well connected. You get things like air play,air drop, you get iMessage, which you can’t find anywhere else. On the Note 20 Ultra, youobviously get all the flexibility and customizations thatyou get an Android, including certain featuresthat really take advantage of the multitasking abilities of the Note. We’ve got great multi-window support, as well as support for Wireless DeX now. So Samsung is saying that you’regoing to be able to connect the Note 20 Ultra to anydisplay that supports screen mirroring and thatway you’re going to be able to get somewhat of a desktop experience on an external display, whichshould be really, really cool. Now let’s talk about the storage options. So you do get a base of 64 gigabytes on the iPhone 11 Pro Max, and it goes all the wayup to 512 gigabytes. For the Note 20 Ultra, it’sgoing to depend on your region. I believe it starts at128 in certain regions, but it does go all theway up to 512 gigabytes. However, the advantage thatyou get on the Note 20 Ultra is that you do have an SD card slot. So you can expand thatstorage by a massive amount. This is something that’s not available on the iPhone 11 Pro Max. Now let’s talk about the audio. So both devices do have stereo speakers. We’ve got one in the earpieceand one bottom firing and both sound really, really good. Unfortunately, neither of thesehave a 3.5 millimeter Jack. Now one feature thatthe Note 20 Ultra has, which really no other devicecan match is the S Pen and the S Pen is going toallow you to do lots of things that you’re not reallygoing to be able to do just with your finger, and ithas been improved massively Samsung have said thatit’s got an 80% improvement for latency, so we’vegot latency down to like nine milliseconds, whichmakes the writing experience very, very smooth. There’s also improvedhandwriting recognition, and you can also import andannotate things like PDFs. It’s something that Ifind very, very useful. Now moving onto the batteries. 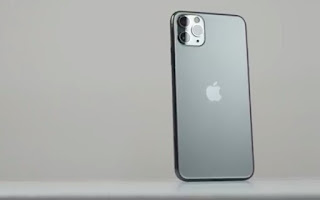