Hey what’s up guys, this is my unboxing the TECNO Camon 16 Premier and TECNO is also launching alongside it,their HiPods H2 Wireless Earphone which they’re giving away for free by the way, .. They’re giving it away for free if you pre-orderthis guy before the 21st of September 2020, you know TECNO really wants you to pre-order because those who do pre-order get 10GB Data on any network of their choice for free.  I’ll be unboxing and giving you guys, my initial thoughts on this device, the TECNO Camon 16 Premier and we’ll talka but about how it compares to its predecessor , the Camon 15 Premier and what TECNO is really trying to do here. Without further ado, let’s get started. 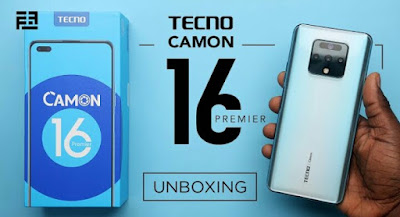 Alright guys so this is how the box of the Camon 16 Premier looks like, it’s pretty reminiscent of the box of the Camon 15 Premier’sbox, except that it’s slightly taller. This is also the box of the HIPOD H2 wireless headphone which we’ll be unboxing in a bit. Inside the box, you get an inverted colormini box housing the paper work and warranty cards and all. You also get a Manchester City case that hassome clippable openings as well. Up next is the smartphone itself covered ina wrap that shows a highlight of the specs it comes with 64MP quad camera set up on theback and 48MP dual set up in front which we’ll cover later, super video mode, ultra nightmode, a big 6.9 inch screen and 33W fast charging Which is really jogging my memories here,kinda feels like I’ve seen this before. Hmmm. In terms of accessories, you do get a headphone,and a USB C power cable with orange accents. I know I’m not the only one seeing that it does take a lot the inspiration from the previous device under Transsion I’ve reviewed. If not the same thing. Taking that wrap off of the Camon 16 Premier,you’re of course welcomed ta the device. 6.9 inches which is not small and as standardwith these phones, you get a 1 minute start up and set up time. 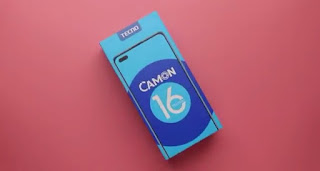 There’s nothing at the top of the device,on the right side is the volume rocker and fingerprint reader slash power button whichhas pretty much become the norm and trend these days, you’ve got the standard dualsim slot at the left of the device, and of course, headphone jack, microphone port, aUSB C port and the single firing speaker which you’ll definitely block. The bottom of the Camon 16 Premier is flatand it actually can stand on its own. Included as a special product is their new HiPods H2 wireless headphone. Taking the wraps off, there a faint text thatshows some value proposition inscriptions, we get the user manual, a normal USB cable,eartips, and the headphone itself whose case is made out of plastic. The case of the headphone does feel sturdyand has some weight to it, which is fair and I like how the headphones are built. TECNO claims 30 hours of battery life on standbyor when it’s idle and 6 hours of music playback. It should also take 2 hours to get fully charged. It’s touch sensitive and also supports instantconnection to your TECNO device. The headphones did sound fine because it’sof the in-ear kind, you do get some sound isolation and sound quality with music wasokay, just a little heavy bass but for the price of free, probably worth it.

TECNO has ditched the pop up selfie cameraand straight protruded back camera array and rear fingerprint sensor on the older Camon15 Premier for a more subtle look now. On the back is where we get the 64MP quadcamera set up. Basically a 64MP main lens, 8 MP ultra wide,Dual 2MP depth and low light sensors. The flash is a bit different it’s a 5 pointflash and not a quad flash as we’ve previously seen. The back of the phone is polycarbonate andit kind of mimics glass because of the way it reflects the logo but it’s polycarbonateand I like the subtle gradient color. Speaking of color, TECNO hasn’t teased somuch more than this one color option which is sort of a blue to silver gradient pattern. Which is particularly prone to a lot of smudges. Anyway, up front is their dual 48MP cameraset up and beside it, an 8MP wide angle camera and an actual flash up front. Quick explanation guys: The 64MP sensor isthe Sony IMX 686 with pixel binning which basically stretches out a 16MP image from0.8 to 1.6, giving it a larger 64MP resolution image which is 4 times bigger. Same thing with the front camera’s 48MP,which is a 12MP pixel binned camera. 12×4 is 48. The advantage here is of course a higher resolutionimage, an image that lets more light in and of course, better relative quality overall. So that’s something to note. In their respective normal modes, you’llget 16 and 12MP images until you switch the 64MP on or in the case of the front camera,the 48MP on You can shoot 4K on both the front and backcamera even 960FPS super slow motion and lower. Night mode is an option too, as well as Bokehmode in video and some fair electronic image stabilization. I have only had some hands on time with thisdevice so I’ll have to check it out later. When it comes to the display, the full viewdisplay of the Camon 15 Premiere will surely be missed. 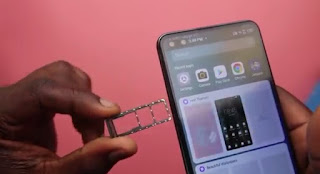 This ditches the pop up camera for a cut outand increases from 6.6 inches to 6.9 inches in an LCD. Camon 16 Premier gets you up to 90Hz whichyou can reduce to 60 or Adapt. It’s of course a 1080p display, 1080 by2460 At this point. If you’re an Infinix fan, I think you alreadyhave a Camon 16 Premier in your line up because this is almost the Zero 8 in the Camon body. Quite a lot of similarities packaged differentlyand vice versa. This also translates into the main processingpower. Here we’ve got the G90T. Their dedicated gaming processor. I saw a tear down video from a Nigerian YouTuber,Tech Overwatch on the Zero 8 which I’ll link below and it has thermal paste and heatsync for cooling so I’m sort of expecting the same thing here which would be good. Also in the RAM and storage department. 8Gb of RAM and 128GB of storage. 4,500 mAh battery which will charger up to100% in 1 hour and 5 minutes on average. Software on here is Android 10 that comeswith heavily skinned HiOS 7 and a lot of bloatware. Even when you tap it slightly, the fingerprint reader is fast enough, also comes with Face Unlock and yeah, it’s pretty much thewhole deal. It’s something I’ll describe, in my ownopinion, as a 2020 transsion smartphone since it’s not entirely unique in its offeringif we’re not looking at the brand name. However, it’s an improvement from the previousCamon series devices. You know there are bigger brands like BBKthat houses Oppo, Vivo, OnePlus and Realme which are unique but under the conglomerate. It’s a pretty standard company practiceacross many industries. This isn’t recommendations of anysmartphones but rather me sharing my experience with it.

It’s getting launched now and as I mentionedpre-orders end on the 21st of September for those who might be interested or probablyinvested in the TECNO line up. It’s definitely an improvement and it’sclear that a lot of things have been done and some things have been taken away or loweredin order to get as much tech out for the price that this comes with. Check my pinned comment for the updated priceand Do let me know your thoughts. I can’t give a full verdict but I’ll bedown in the comments chatting with you guys and answering your questions. Alright, if you liked this video, please hitthat thumbs up button and hit the subscribe button and bell icon beside it to know wheni post a new video. Thanks again for watching and I’ll talkto you in the next one.