If you want to turn your TV into a smart one, either because it does not have the features or Because its already old and has lost support for some apps, you could use two types of products the discreet Chromecast, which mirrors mobile content to the screen or the various TV box options from different brands and that bring a more robust operating systems. However, how about bringing together the best of both worlds? That’s Xiaomi’s idea with the Mi TV Stick, which landed in Brazil last month. It is worth noting that the initiative is not new – Amazon has already done this with the Fire Stick but until now no brand had shipped Android TV on a dongle with HDMI output that can be discreetly attached to the TV.We received the model for testing and, in this analysis, you’ll find out if it is worth buying the new accessory that promises to extend the lifespan of older Smart TVs or transform ordinary TVs In smart ones. 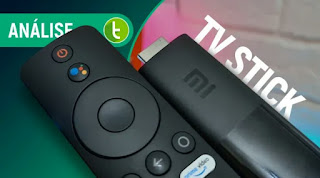 The product box does not bring many things, not least because the Mi TV Stick is a very simple accessory. It has its own dongle, a cable with USB and USB mini outputs, the remote control, a power outlet in Brazilian standard, in addition to the instruction manual and warranty certificates. The Mi TV Stick is a simple dongle that resembles a USB stick but is not as small as a and this goes as an alert for those who have small 20 “TVs or for those monitors TVs whose inputs are located at the rear or bottom of the TVs, as it is possible that there is some disorder in the fitting.

On the TV where we did most of the tests, it was possible to notice this detail. It is attached to the wall and its entrances are all located at the bottom at the rear. When placing the Mi TV Stick and its cable on the TV, they were about 3 cm apparent. Another detail is that because the USB and HDMI inputs are very close, it was almost impossible to fit the Mi TV Stick and cable, however TVs where the inputs are positioned on the back of the screen sideways, connecting the device will be simple and without hassle with it becoming imperceptible.

The Mi TV Stick has a glossy, plastic construction on the bottom half and a matte finish on the other half with the Xiaomi logo with a shiny appearance. The remote control, powered by two AAA batteries, is also made of black plastic but with a totally matte appearance. Most keys, except those dedicated to Netflix and Amazon Prime, are black and the keys are a bit hard to press. At the top of the remote are the Power buttons and just below the Google Assistant. Next, is a directional and selection, made by two circles, one inside the other. Next, multi-task buttons, back, and Home, then the dedicated buttons streaming services and finally the volume keys.

The installation process is simple, just connect the Mi TV Stick to the HDMI input and choose whether to connect the cable to the outlet or the dongle itself – and the device starts at the settings screen. There are few steps needed to define language and region, and after that, it is possible to configure with the aid of the cell phone or directly on the screen. After the configuration, the Mi TV Stick opens the home screen with the default configuration of Android 9 for TVs. The first screen shows the main applications in rows with screen thumbnails, which can be allocated so that the user prefers and then screens with suggestions for each streaming service That are installed. You can choose the order in which these suggestions appear, from which services, or even remove The suggestions. Just above is the voice search area, date, and time and settings. Here it is worth mentioning a detail for those who choose to connect the dongle to the power outlet activating the option to link controls it is possible to use only that of the Mi TV Stick to turn the TV off and on again, if your device is supported.

In connections, the Mi TV Stick supports dual-band Wi-Fi, 2.4 and 5 GHz, but Bluetooth is still 4.2. Highlight here for two important pieces of information: the Mi TV Stick runs Android 9 and has 1 GB of RAM and 8 GB for storage. It is the same, for example, that TCL’s P8M TV, which runs the Google operating system natively and has already been tested around here. RAM should not compromise streaming services in general, such as YouTube, Netflix, Amazon Prime Video and Globo Play, but it will affect the experience in two moments. When viewing Google search results, using the wizard, and when playing. We tried to play Real Racing 3 on the Mi TV Stick and the experience was disastrous.

The game took too long to load and crashed, making the experience impossible, even using a GamePad. The experience gets a little better on Asphalt 8, which can be played using the Mi TV Stick remote control itself. In this case, it is possible to play although with low frame rate and characteristic performance of a device with little RAM. Still, our recommendation is: if you want to play the titles available on the Google Play Store use your Android phone or if you have an iPhone on the App Store. The other important information is that the Mi TV Stick plays the content in Full HD which is sufficient in most cases, like YouTube and other streaming services but it makes it pointless, for example, to sign Netflix’s 4K plan. Of course, thinking about who owns old TVs, launched before the arrival of 4K models and want to consume content, the resolution tends to be sufficient. Other good features present here are the built-in Chromecast and Google Assistant. About the first feature, nothing to add – screen mirroring happens quickly and fluid, with the supported apps, ranging from the popular YouTube, Netflix, and Amazon Prime to choices like NBA and Facebook Watch, which ran smoothly.

Google Assistant has limitations such as not programming a timer or even turning on the device, in general, can open applications, perform actions with voice commands, and is recognized in Google Home for those who automated their home by the assistant. For having a dedicated button or accessing by clicking on the symbol in the upper left corner of the screen there is no need to say “Ok, Google”, just say what you want after pressing the button. Being an Android device the Mi TV Stick obviously has Google Play but don’t think it’s the same version and a variety of apps from the mobile store. Here the focus is on streaming services and games, and even so, options are lacking. Globosat Play, recently renamed Canais Globo, and which gives access to cable channels From the Globo group, is one of the notable absences, even with the presence of globoplay, TELECINE Play, GE and Combat Play. In games, most of them come from cell phones and need a Bluetooth GamePad to be executed. Worth it? No doubt! The Mi TV Stick represents a definitive goodbye to Chromecast for those who want to boost their TV with functions that it would not originally support.

When using Google TV as an operating system, it puts itself one step ahead of the Amazon Fire Stick for the variety of applications that the Mountain View giant allows downloading. And this happens without the need for an external wired device. Everything is cleaner and more discreet, as is the case with Chromecast itself. In addition, it makes life easier for users who will no longer need to use their phone every time they need to Browse for content on their TV, as all interaction is done with the remote control.

However, this goodbye to the Google dongle comes at a price. Xiaomi in Brazil officially asks for $ 50 or $ 55in cash, more than double what you pay via import sites. Of course, we need to recognize that even in MarketPlaces the value is not far from that and you need to check if you will also have the warranty offered by the official store. Recalling that the Fire TV Stick, its direct competitor, had a starting price of $ 30 on the Amazon website.

Whoever wants to import needs to be aware of the risks involved, ranging from delivery to warranty and perhaps the best way is to expect a drop in prices or some special promotion. Take the time to comment on what you think of the device. Is it far superior to Chromecast and rivals? Or do you think it is not worth the investment? I will wrap up here, a big hug, and see you next time.