Samsung launched the Galaxy Note 10 Lite in Brazil earlier this year. It promises to bring the Note line experience at a more affordable price, but in return, you will take old hardware. Is it worth saving and investing in the novelty or is it better to pay a little more and go on the Note 10 Plus? That’s what this  comparison will help you find out. 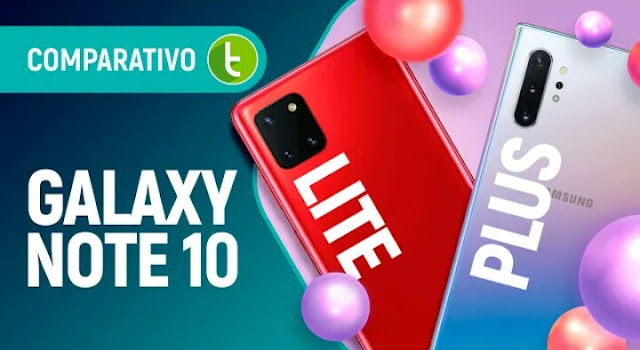 Both are almost the same size. If you’re looking for a big-screen phone, you’ll enjoy it. But the Note 10 Plus ends up being a little more compact as it has thinner edges. Another plus of the Plus version is the finish – it has a glass back with Gorilla Glass protection Note 10 Lite features mirrored polycarbonate that Samsung calls “glastic”. It has a glass face but is the same plastic as the Galaxy A Series. The side of both is made of aluminum, with similar quality. In the front part, there is a hole centered on the screen, being a little smaller in the Lite. At the rear, we have the cameras grouped in a vertical line on the Plus and organized in a jump block on the Lite. Which one do you prefer? We have three cameras in both, with the right to ultra-wide and telephoto, but Plus still has a ToF sensor that helps with augmented reality. The Note 10 Plus is a more complete cellphone with IP68 certification for protection against water and dust, wireless charging and also reverse, supports 6th generation Wi-Fi and faster USB connection, as well as support for Samsung DeX, which turns the phone into a PC. Lite has the advantage of only offering P2 input for headphones. Note 10 Plus starts by taking the first point.

Both have an AMOLED screen, but it is not the same panel. In Plus we have 0.1 “more and Quad HD Plus resolution, while in Lite the resolution is limited to Full HD. Both devices deliver high brightness, however, the Plus screen reflects more against the light due to the curvature at the edges. Concerning color reproduction, the story already changes – if you are the type who likes to see on the mobile screen the world exactly as it is, so it will prefer the Plus because it has better calibration. Also, HDR10 is supported on Plus, which takes better advantage of compatible movies and series with the maximum HDR standard. 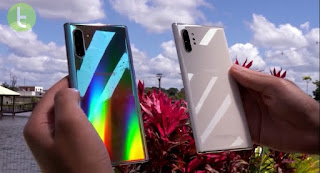 In terms of sound, the Plus also comes out ahead, as it has three speakers. In addition to the standard one next to the USB port, as we have in the Lite, there is also the calls that serves as a secondary channel for the stereo effect and one that is at the top being dedicated to the bass. This all helps to offer a more balanced and immersive sound which still has AKG calibration. The headset that comes with the Note 10 Plus is also better, and if you’re an audiophile who wants to feel the full potential of the expensive headset you invested, you won’t want to settle for the limited sound power of the Lite. For music, Plus delivers the best experience with the most advanced audio codecs. Here we will give Note 10 Plus two points for having a better screen and sound.

Both come with Samsung’s stylus pen, the S-Pen. Plus is a little more advanced, it allows you to control your phone via gestures. In the Lite you have the same features as Note 9. You can use the S-Pen button as a camera remote to help you take a selfie, but that’s it. The whole part of multitasking, editing and content creation is similar between the two. The S-Pen is a nice extra, that can make a difference in the lives of some people, but the Note 10 Plus goes beyond that. With Samsung DeX support you can download an application for Windows and Mac, plug in your phone via USB and use Android in an interface adapted for desktop. It also allows you to use the ToF camera to map objects and create three-dimensional versions. Regarding Android, Plus arrived with the Pie version and received Android 10, same version that came with the Lite. Both are guaranteed to receive Android 11 in 2021, but there is no certainty that we will have other updates beyond these. The Note 10 Plus does everything Lite does and a little more, so it takes one more point. 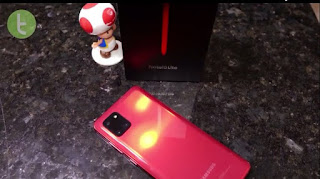 Both devices have Samsung’s hardware. In the Lite we have Exynos 9810, launched in 2018, and in Plus, Exynos 9825, which is from 2019. And as expected, the latest is more powerful and economical. In our standardized speed test Plus was 22 seconds faster than Lite, on a daily usage, some may not even notice the difference in speed but the animations are more agile in the Plus, as well as the content of the apps, that loads a little faster. In benchmarks, the difference in scores is not big. In the case of AnTuTu, we had a difference of only 22 thousand points, this shows that the Samsung hardware has not evolved so much from one year to the next. Plus’s GPU is also more powerful but, on the other hand, it needs to deal with higher resolution, which ends up leveling their performance in the games. You can reduce the screen resolution to Full HD, which also helps to reduce consumption a little of battery. The Note 10 Plus takes another point for being faster.

The Note 10 Lite has 200 mAh more battery power and you could expect higher battery life due to the lower resolution screen, right? This would happen if the older hardware did not consume more energy and that ended up leveling things out. In our standardized battery test, the difference between the autonomy of the Lite and the Plus was less than 10 minutes, what we can declare a tie, that is, both offer cargo for the whole day as long as you don’t use it a lot. The advantage of the Plus version is for the recharge time, even if it comes with a charger which delivers the same 25-Watts of power, the most advanced USB input allows more energy to be sent to the battery, making it less time spent in the outlet. And another differential of the more advanced model is having support for 45-Watt charger, which is sold separately. And don’t forget that Plus can be used as a PowerBank to recharge other devices either via USB or even wireless. And again the Note 10 Plus takes another point. 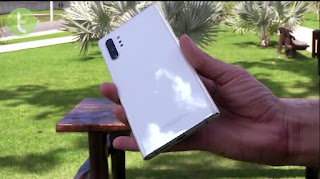 On camera, which one wins? We have a 12 MP sensor in both, the Plus’s differential is that it brings variable aperture that adjusts according to the ambient light level. In photos taken during the day, there are few differences between the two, since Lite brings the same quality of Note 9’s camera. In darker scenarios, we see Plus’s advantage for having a larger focal aperture and better image post-processing, which guarantees superior quality textures and less noise. Both offer a night mode that brings similar results. The ultra-wide camera has better quality on the Note 10 Plus and has less lens distortion. The telephoto suffers less in dark places, but the zoom quality is similar. While the portrait effect has the same level of accuracy in both. The Note 10 Plus takes point for having a slightly better camera. On the front, there’s a 32 MP camera on Note 10 Lite that compresses 4 pixels into one, resulting in 8 MP images – while the Plus is limited to a sensor of only 10 MP. Does this mean that Lite is better for selfies? Not so much. Since there is no autofocus in Lite, you need to set the focus distance exactly or you will have slightly blurred selfies. The Plus allows you to take selfies from any distance without worrying about it. Night mode is also present in both and helps to reduce noise and improve skin texture against the light. One more point for Note 10 Plus.

The camcorder of both record in 4K resolution up to 60 fps, with the front we have the same resolution, however, limited to only 30 fps. The quality of the Note 10 Lite videos is very similar to the Note 9, as seen in the photos. The truth is that there has not been such a huge leap from one generation to the next. But the Note 10 Plus records with a little more quality. The biggest difference is in the night shooting, with less noise and a higher level of detail in what is distant. Both have excellent stabilization that controls shakiness a lot. Sound capture is stereo and of excellent quality in both. And Note 10 Plus takes another point on camera. If you want to have the S-Pen differentials and are not willing to pay more on the Plus, then the Lite would be the ideal model for bringing many of the features of the pen present in Note 1 Plus, only gestures are left out. The price difference is not so great between the two. The Note 10 Lite would make sense if it cost less than R$ 2500, but the truth is that its price will fall in the coming months and it will always be below the Plus version. As it is the most accessible, it takes its first point.

This was one of the biggest massacres we saw in the OUR comparisons, and the Galaxy Note 10 Plus almost takes all the points. The truth is that it is a better phone, more complete and costs a little more. You have a better finish, superior screen, and sound, more agile performance, shorter recharge time, better cameras and more complete S-Pen. The benefits for Note 10 Lite are only for the P2 input for headphones, that some people really miss – and the lowest price. The Lite would only be worth it if the difference in the value of the two was more than $ 100. As this is not the case today, we recommend the Note 10 Plus as a better purchase.  Also, comment below what you think of this comparison. A big hug and see you next time.