While Apple, Samsung and several others invest in mobile phones with giant cameras in the rear, LG goes against the grain and bet on something more minimalist with Velvet, a smartphone that was launched in several versions and arrives in Brazil with an old Qualcomm platform.  He doesn’t come to fight with the S20 or Note 20 line, but he wants to be a good premium intermediary with elegant design.  Does it attract only by beauty or does it also offer a good set?  Let’s check it out. 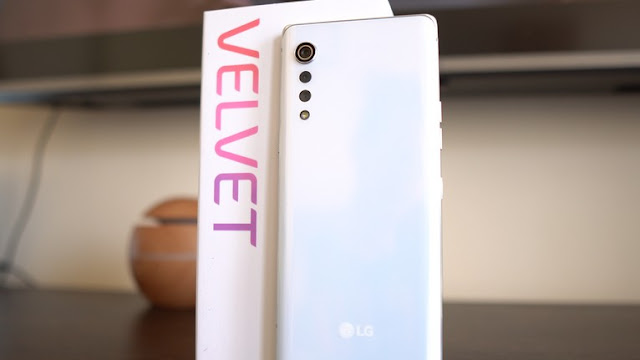 The LG Velvet comes in white packaging and brings only the basics of accessories, without a headset:

The Velvet’s design differs from what we saw in models of the G and V line. It has the same metal body with glass back of the brand’s flagships, but here it bets on curved edges and rounded corners.  After much reluctance and always bringing flat screen phones, LG finally gave in and followed Samsung’s path.

The curvature is accentuated, but not as much as the Motorola Edge’s cascading display.  While most of the 2020 releases bet on a hole in the screen for the selfie camera, LG still preferred to invest in the classic drop notch.

The top and bottom edges could be a little thinner and the biometric reader located on the screen is not the fastest.  Its finish, on the other hand, does not lack in quality for more expensive rivals and still has military certification to guarantee high resistance against impacts and extreme temperatures.  And yes, there is IP68 certification for water resistance.

The rear also has the same curvature as the front and what draws the most attention are the Velvet cameras.  LG has dubbed the layout a “raindrop” and you can understand why.  The main one is more prominent and has two chrome rims around it, while the ultra-wide and depth ones are more discreet.

We tested the white version with discreet iridescent effect.  If you like a more striking tone then you should choose the color Illusion Sunset that looks like a mixture of red and pink.  Velvet also hit the market in gray for those looking for something more sober.

It is a large cell phone with a screen stretched in a pattern close to the ultra-wide we have in the cinema.  The 6.8-inch OLED panel has Full HD + resolution with good brightness, perfect black and a wide viewing angle.  Native calibration tends to cooler colors with slightly bluish white.

LG does not mention HDR support in Velvet, but it is possible to take advantage of HDR videos on both YouTube and Amazon Prime.  Velvet is not on the list of devices approved by Netflix, but it does support L1 Widevine, so we may see changes in the future.

There is stereo sound with good sound power that surpasses rivals Motorola and Samsung.  It reproduces clear and undistorted sound with a lot of focus on the voices.  LG claims that its advanced 3D audio technology can identify the displayed content and adjust the sound equalization to better explore movies and music.  In practice we saw no difference and Velvet proved unable to reproduce bass. The national model does not come with a headset, but at least there is a P2 input.

The Velvet was released in several versions and the one that came to Brazil has the Snapdragon 845, same hardware present in the LG G7 launched two years ago.  As old as it is, it is still superior to much more recent premium intermediary with Snapdragon 730 or even 765. And that was clear in our multitasking test when overcoming Motorola Edge and Mi Note 10.

He also gets higher numbers in benchmarks.  You will get higher scores on AnTuTu with an average 20% advantage over rivals in the same price range.

The Snapdragon 845 still has plenty of breath to handle games.  All the games we tested on Velvet ran with great fluidity and deliver performance at the same level as other forwards with a 60 Hz screen. At PUBG it was possible to play in HDR High quality and the others in the best possible quality.

While premium intermediaries bet on cameras with 64 or even 108 MP, LG was more conservative and we have in the Velvet a main sensor of 48 MP that comes with an ultra-wide camera and a dedicated one for background blur.

The Korean premium intermediary is able to record beautiful photos.  He gets it right in sharpness, colors and HDR.  The ultra-wide tends towards more saturated colors, which ends up killing the details of the shadows, but is still capable of registering great photos.

There is a scene optimizer that uses AI to detect scenarios and make the right adjustments to capture the best shots.  It really works and can highlight plant details with more vivid green or make the sky blue more intense. 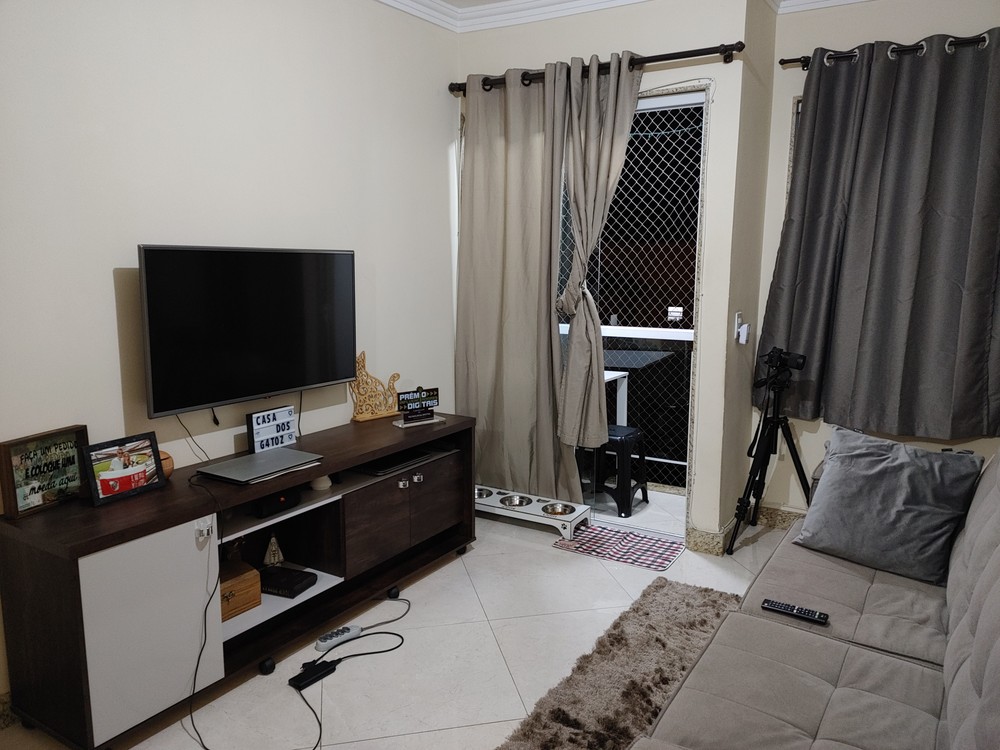 Using 48 MP mode helps to sharpen distant details in photos, but will have triple the storage being taken up.  For many it will not be worthwhile to fill the cell phone memory in exchange for a small gain in quality.

Velvet’s camera could be better in darker settings.  Shooting at night results in dark photos that even night mode cannot save.  It even makes the images a little clearer, but it is far from what we expect from a cell phone with advanced hardware.  The ultra-wide suffers even more in dark places.

The third camera does its job well, but a dedicated macro camera would be better, since the focal length of the main camera is high.  If the ultra-wide had autofocus it could serve this purpose as we have in Motorola phones.

The front camera records good selfies.  It loses sharpness at night, but still does a decent job.  The blur does not have many flaws, but it tends to disable HDR.  If you are taking pictures against the sun or near a window, the background of the image will burst.

Velvet shoots in 4K with the main rear and also front camera.  Ultra-wide is limited to Full HD resolution.  The quality of the footage is good and the extra microphones help to cancel the background noise.  The highlight is the ASMR mode that amplifies the sound to highlight even the most subtle details of the audio.  There is also a “bokeh” effect for sound with emphasis on the voice of whoever is closest to the cell phone.

What is disappointing about the Velvet camcorder is its slow focus that gets even worse when shooting at 60 fps.  The camcorder also disappoints at night, but its stabilization system is quite efficient.  There is a Steady Shot mode that basically uses ultra-wide to shoot and cuts the corners of the video for greater stability, but with a lower image and more noise.  The front end shoots with good quality and shakes less than Velvet’s competitors.

Who said old hardware is bad battery?  The Velvet manages to deliver autonomy superior to the Motorola Edge that brings newer processor and bigger battery.  You will have a charge for the whole day and even if you require more of the device you will hardly return home with it unloaded.

The recharge time is not impressive and it takes just over 1 hour and a half to go from 0 to 100%.  With a fast charge of 15 minutes it is possible to recover 20% of the battery.  It’s not a bad time, but it’s time for LG to invest in more powerful chargers.

Velvet comes out of the box with Android 10 and the latest Korean interface called only LG UX.  It is the same view in recent basics of the brand and brings a cleaner look without those menus separated by tabs.

When starting the device for the first time, you can choose whether you want to have an app drawer or if everything will be left on the home screen.  The notification part has a translucent background, different from the white background that we have on Android by default.  The icons are green by default, and you can customize the colors between five options.  They are organized at the bottom of the screen for easy one-handed access, similar to the One UI of the Galaxy line.

The curious part is that the Velvet comes with native features for the Stylus Pen, but the pen does not come with the phone.  LG also announced the secondary screen at launch, in the style of the accessory that comes with the G8x, but has not yet reached the national market.

Velvet also comes prepared for automation and allows you to adjust the phone’s settings based on your location, such as when you are at home or at work.

LG didn’t always get it right in its top of the line, but in Velvet it managed to make a round premium premium cell phone.  It currently costs less than R $ 4,000 and delivers good performance, a battery that lasts well, a good multimedia set and records good photos and videos.  Is it worth paying for it or do you have better options?

Its biggest rival is the Motorola Edge, which currently has a similar price.  Motorola’s was slower in our tests, the battery lasted less and suffered even more with the camera.  From imported there is the Mi Note 10 in the same price range that surpasses the Velvet in batteries and cameras, but will have to waive the warranty.

There is also the Galaxy A71 that costs almost half and delivers better performance … at least in multitasking.  Its battery lasts the same as Velvet and even recharges faster.  But you will have to leave your fancy design aside and settle for a plastic cell phone without IP68 or stereo sound.

So this was the  LG velevet review if you liked the post plz share it.
And if you want to ask anything then plz let me know in the comment section.
I will still around Stay safe stay happy.