LG VELVET vs MOTOROLA EDGE || WHICH ONE YOU SHOULD BUY ||

This was a slightly different year for these two manufacturers.  Motorola once again entered the top line game with Edge + and brought Edge for those who didn’t want to spend that much. 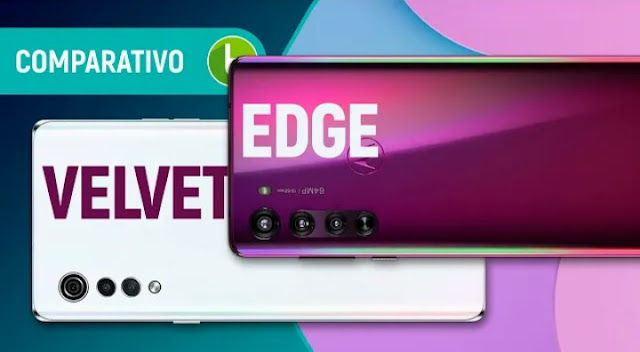 LG launched Velvet, one of its most beautiful devices, which is out of the ordinary among its smartphones and is betting on a renewal in the brand’s intermediaries.  And they are a little bit alike in the visual.

We decided to put them side by side to help you choose which one best fits in your pocket, how about that?  If you liked it, follow us in this comparison.

As we have already said, they are even similar.  For these two intermediaries, manufacturers invested in cascade-style screens, long devices with a rounded footprint, straight back and traffic light-shaped cameras.

What changes is a flash to the side and more cameras jumped on the Edge and some of the height of the glass on the Velvet.  Both also have iridescent finishes, but at LG we have white, gray and a mixture of orange and yellow, while at Motorola there is a black and a pink 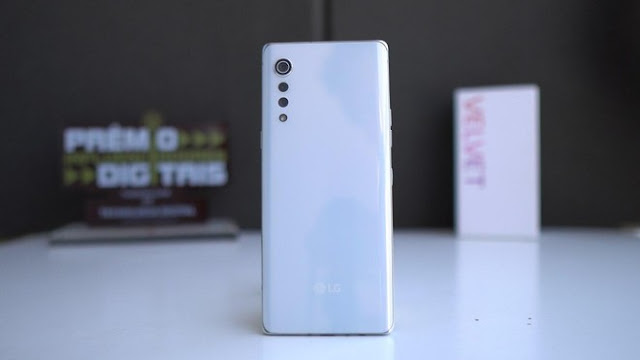 There are also differences in the material, and if the two use aluminum on the body, Velvet invests in glass for the rear, replaced by plastic on the Edge.  LG preferred to use the oldest drop notch on the front, while Motorola has the hole in one corner.

There is IP68 protection and military certification on the Velvet, and the Edge has only splash protection.  Both are dual SIM with the second hybrid chip with the cradle for the microSD and also share the biometric sensor not too fast below the screen.  One is lighter and thinner, the other is smaller.

The point was with Velvet, who made the most of the construction.

We have OLED for both sides, in very similar sizes of 6.8 inches for the Velvet and 6.7 inches for the Edge.  Both are FullHD and even having both cascade screen, the Edge is much more curved and has use of the upper body screen.

The screen aspect is 20.5: 9 on the Velvet, longer than the Edge’s 19.5: 9.  Both have panels with very intense colors, but the Velvet will be brighter and better in the sun.

The Edge makes up for this very well being the only one of the two to have a 90Hz refresh rate screen.  Both bring support for HDR10, even though LG does not officially report it.

Because they are not exactly thin, these two phones maintained the P2 connection, which is great, but only the Edge brings headphones in the box, even though it is a basic pair below what the device is worth.

In external sound, however, although we have two stereos, Velvet stands out.  That’s because the quality of your audio is clearer, with a better balance between the two speakers.  On the Edge the sound is different on the speakers and is more muted than normal, although it distorts little at most.

Premium intermediaries are good because they come with the latest version of the system, or almost.  Released before the final version of Android 11, these arrive with Android 10 from the factory.  And since LG and Motorola are two of the most uncertain manufacturers about the upgrade, it’s hard to say whether they go any further.

LG UX and Motorola’s Me UI have good features.  On Edge, they focus on the Moto app, with extra gestures, functions and uses for the curved screen.  Velvet brings a renewed interface, but still very inspired by Samsung, with support for themes, fonts and a lot of customization of functions.

As for the connections, both bring Wi-Fi ac, Bluetooth 5.1 and NFC, but the Edge’s GPS is a little better, and it still has 5G support, including the DSS that is being inaugurated in some parts of Brazil.

Although the Edge’s Snapdragon 765 is newer, it can be said to be less powerful than the Snapdragon 845 two years ago from the Velvet.  In addition, the two come with 6 GB of RAM and 128 GB of storage.

And we see that in every test.  In AnTu, the benchmark did 10% better for LG, and in the standardized tests of application openings Velvet performs 20% better than its rival, showing that not only is it still possible to spend, but the Motorola system is not doing very well  oiled to the hardware.

In games, the 845 can still handle all the titles we tested.  On the Edge, the 90Hz screen makes games more accurate, and it ran almost everything without problems, stalling when we tested PES 2020 at the maximum.

The point is from Velvet.

The Edge comes with more battery than the competitor from LG, having a reasonable 4,500 mAh.  The Velvet is a little lower and has 4,300 mAh inside.  Does the 90Hz screen make a big difference here?

The answer is yes.  The two will have autonomy for a full day away from the plug, but the Velvet’s 20 hours and 36 minutes surpass Edge’s 17 hours and 16 minutes.  At screen time, Motorola is doing slightly better, strangely.

At the time of recharge, LG finishes making its point.  Having a 16W charger it takes almost an hour and forty minutes to reach 100%, also counting on wireless charging.  The Edge comes with an 18W charger in the box and goes past two hours and forty minutes.

As you already know, the point is from LG Velvet.

Two multiple sets of cameras here, but it is possible to say that Motorola invested more in versatility, bringing even one more camera, see:

In the main sensors, at least in good light, we have equivalent cameras.  The two match colors and sharpness, bringing a very efficient HDR for landscapes and portraits in sunlight.  In less light, the Edge stands out for having a night mode that handles noise and clarity much better than Velvet, which could be better.

The ultrawide of both also records great catches, although it loses details by saturating things on LG and it loses sharpness on Motorola.  Still, the Edge camera has auto focus and serves as a macro, which makes cool pictures.

Both have sensors that help with cropping, and the Edge completes the set with an extra telephoto lens.  By interpolating the photos, it compromises quality, but the present manual mode helps to improve.

For some details, the point is with the Motorola Edge. 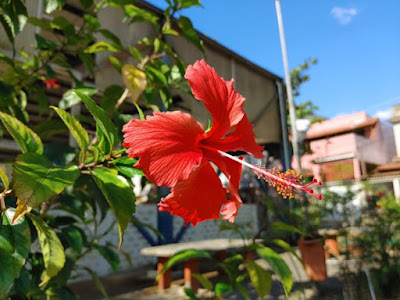 For the videos, both record in 4K, but without 60 fps.  For that, they need to be in FullHD.  Only Velvet has electronic stabilization, also in FullHD, and does a very decent service.

The focus speed will be poor on both, as well as the audio capture and good on both as well, but in general the videos on Velvet are better, with more color balance, which are also more vibrant.

The point of the videos is Velvet. 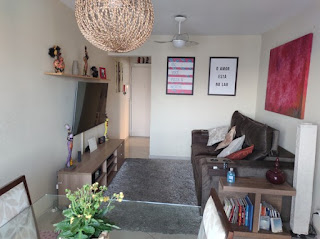 The front ends with a 16 megapixel sensor with f / 1.9 aperture on the Velvet and 25 megapixel with f / 2.0 aperture on the Edge.  The latter from Motorola can register good selfies and colors without exaggeration in open and well-lit places, but the HDR may not activate and ruin the background of the photo.

At LG we also have good portraits.  There is a loss of sharpness at night and the blur, although good, tends to disable HDR.  Only this camera records in 4K here.

The last point of the photos was also with Velvet.

In their value, none pleased with its launch.  If Velvet’s recent $ 250 is high, Edge’s  $ 330 is prohibitive.  However, they are two brands known for launching products that have a rapid price drop in the market.

Currently, the price drop was greater for the Edge, which also arrived a long time ago, and its current R $ 200 is similar to the  $ 210 of Velvet.  The two are still going to experience a drop by the end of the year, and next year will be interesting purchases.

Being cheaper than the Edge and with the score so far, Velvet is a better cost benefit and takes the final point.

LG has been showing that it is hitting its premium middleman, especially now that its price has started to fall.  When it is below three thousand it will be a very interesting purchase, showing that chipsets tops from other years can please, in a Pocophone strategy.

It has a lot of things relatively superior to the Edge, even though it costs less.  Motorola has the almost irresistible differential of the screen at 90Hz and early support for 5G, but it is based only on that.  When it drops in price, even more, it will be more attractive.

In addition, Velvet has better autonomy with less battery, superior finish, good audio and performance and will only displease even those who want the fastest screen for games.

What do you think of LG’s Velvet?  Have you seen our full review?  Do you think Edge deserved some points that went to the rival?  Tell us down there!