ONE PLUS 8 PRO REVIEW:

OnePlus became the type of company that it criticized the most in the past: the one that charges expensive for a top-of-the-line cell phone.  Before its line offered “flag killers” that cost half the price and had a cost-benefit much higher than the rivals, now we have the OnePlus 8 Pro that arrived costing almost a thousand dollars.

Of course, the product has evolved and we finally have technologies missing from its predecessors.  But is it worth paying for it?  This is what you will discover in this complete analysis of Techradon.com. 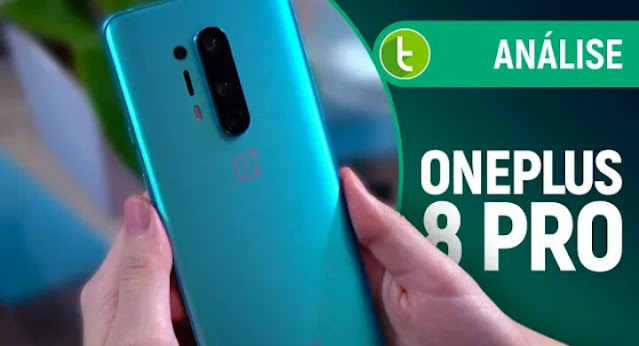 The OnePlus 8 Pro comes in a red box with the number 8 stamped in black on the cover.  In addition to the cell phone you receive:

The OnePlus 8 Pro does not come with an adapter for P2 input in its box.

The design hasn’t changed that much since the OnePlus 7 Pro … at least not at the rear.  The novelty is in the front: the camera popped up and now we have a hole in the left corner.  The sides have a smoother curvature, which helps to reduce reflections on the glass and improves the grip with the device.

The measures grew due to the increase in screen, but the new is a little thinner and lighter, even with the increase in battery, which is a notable feat on the part of OnePlus.  The build quality follows the same as before with metal body with front and rear glass with Gorilla Glass 5 protection. In addition to this green option, you will find the OnePlus 8 Pro in blue and black colors.

It is a shame that the pop-up camera has been replaced by a hole in the screen, but at least now we are IP68 certified for water protection.  Another technology that OnePlus owed in its flagships was wireless charging.  The 8 Pro is not only supported but also features high-speed wireless charging, almost as fast as the conventional charger.  And there is also support for reverse charging for you to share the battery with other devices.

Other technologies have undergone small advances.  Bluetooth is now 5.1 and Wi-Fi is sixth generation, but the headphone jack and the microSD slot are still out.

The screen grew a little, but maintained a resolution similar to its predecessor.  The biggest advance is for the new panel, now 120 Hz. If the 7 Pro already delivered excellent fluidity, the new one manages to go even further.  And unlike Samsung’s flagships, here you can have 120 fps at full resolution.

The Fluid AMOLED panel has great quality and very high brightness, being the largest we’ve seen in the line and surpassing even Samsung’s rivals.  OnePlus claims that its screen has excellent calibration by default, but we find the colors colder than they should.  Of course, you can change the calibration in the settings.

The OnePlus 8 Pro is the first to feature MEMC interpolation technology to make videos recorded at 24 fps (such as movies and series) more fluid.  It’s basically the same technology that we find on more expensive TVs and it works well here.  In addition, HDR10 + is supported.

Its sound is stereo with good power and audio more balanced than many that we tested.  You may only be behind the Mi 10 which has stronger bass, but you will have a great sound experience with the OnePlus 8 Pro. Now if you plan to use a wired headset you will have to buy an adapter, since none comes in the box and the  phone does not accept USB-C type phones.

Equipping the 8 Pro we have the Snapdragon 865 platform, the same present in several flagships launched in 2020. And what to expect from this hardware married to OxygenOS, one of the lightest interfaces on Android?  Everything runs smoothly on 8 Pro. It is quick to open apps and can keep everything loaded in RAM.

As much as it performs well, we feel a slight disappointment.  He failed to outperform his predecessor in our multitasking speed test and is behind the main rivals.  Of course, the difference is a meager second and many should not even notice.

In benchmarks is that it shows all its power with scores higher than others with Snapdragon 865 and standing well above the Exynos 990. In games we have not seen any problem in any tested game.  All ran smoothly in maximum graphic quality.  Few titles take advantage of 120 Hz, as with recent Samsung releases.

The rear camera of the OnePlus 8 Pro is more bouncing due to the new sensor 40% larger than the OnePlus 7 Pro. The resolution is the same as 48 MP before, but with larger pixels it means that we will have more light coming in, which should solve  the problem of dark photos of the previous model.

The 8 Pro is capable of recording beautiful photos by day.  We have images with lots of details, dynamic range and vibrant colors.  By default it saves the photos at 12 MP.  You can switch to 48 MP mode, but processing takes longer and we notice some artifacts and noise, even during the day.

The new larger sensor really makes a difference when shooting in low light and we saw a significant advance.  It is still unable to compete with other brands’ flagships, but OnePlus is moving to get there.

The ultra-wide has undergone great evolution and now also has a 48 MP sensor, which solves the problem of the previous one that had a bad wide-angle camera.  Now you will have good pictures with this wider lens and the same color balance and dynamic range as the main one.  Of course, as the sensor is not exactly the same, there is a slight difference in quality, but we no longer have that chasm between the two cameras.

The telephoto lens is the same as before, but now it makes better use of the main sensor, which helps to approach what is far away with less loss of quality.  It works great during the day, but at night it makes its limitations clear.

Finally, we have the most controversial camera: a sensor that filters colors.  It basically serves to change the tone of the photos, but it came to be used as a kind of x-ray for allowing to see through fabrics and plastic.  OnePlus ended up disabling this feature in a recent update.

The front camera is the same as before, but now with a smaller focal aperture.  She keeps taking good selfies, the portrait mode separates well from the background and the colors are not as saturated as those of the rear camera.  Even if the focal aperture has been reduced, it is still possible to record good selfies at night, as long as you avoid blurring the scene as the noises will become more evident.

The OnePlus 8 Pro is not able to record videos in 8K like others with Snapdragon 865. The novelty is for the new 4K Cine mode that shoots in Ultra HD in the standard 21: 9, the same as the cinema to fit perfectly on the device’s screen  .  Optical stabilization is now available in 4K and works well.  The overall quality of the footage is very good, but the focus is quite slow.  At night you’ll have good footage, as long as you don’t use the ultra-wide.  Filming with the front camera is also of good quality, including satisfactory audio capture.

OnePlus has always done well on battery, whether in autonomy or in recharge time, and this is no different with the 8 Pro. It is amazing how well the 4,510 mAh can render even with the 120 Hz screen. In our standardized test we had 22  and a half hours of autonomy, surpassing all models of the S20 line.  Even Ultra when used in 60 Hz mode.

To fully fill the battery, it is necessary to wait a little over 1 hour.  It may not be an impressive time, but accelerated charging can recover a third of the charge in just 15 minutes in the socket.  And with half an hour of charge you have 60% to use, which guarantees almost an entire day in moderate use.

The OnePlus 8 Pro comes with Android 10 from the factory modified by the same OxygenOS interface as before.  The company’s software is very clean, as we have seen in previous generation models.  What changes in the latest version are the redesigned icons, the new animations for greater fluidity at 120 fps and the dynamic wallpapers.

The biometric reader remains on the screen, but is now in a higher position, making it more comfortable to use.  In terms of speed and accuracy, there’s not much difference from what we’ve seen before.

For those who enjoy a footprint closer to pure Android, but want something more optimized than Motorola’s Android, OnePlus 8 Pro offers the best experience with OxygenOS.

The OnePlus 8 Pro is a nice phone that finally offers a complete flagship package, but now it charges a lot for it.  Is it worth paying 900 dollars in it or is it better to choose an alternative in the national market?

The Note 20 Ultra is the latest addition from Samsung, but it costs a lot more, but delivers a better set.  He owes only a little battery.  The S20 Plus is a great alternative to the 8 Pro and costs less today.

The Mi 10 can be imported for much less and delivers a similar set in performance, battery and cameras.

And it wasn’t this time that we saw OnePlus debunk the iPhone 11 Pro Max that is still king in our multitasking performance test.  The Apple model also has better battery and cameras, but it has a higher value than the Chinese model.