DIFFERENCE BETWEEN SMART TV AND ANDROID TV || WHICH ONE IS BEST ||

Smart TV and Android TV Difference?  In today’s era, everything has changed.TV used to come in earlier times, then LCD, LED TV came. But in 2008 Smart TV was launched for the first time.  But there was no information about it in the market.

Therefore, some people do not have much information about Smart TV.  Smart TV runs instantly like Android.  But sometimes many questions come to our mind.

We all know, Android is an Operating System.Those who run devices like Mobile,Tablet.In which all apps can be installed. Apps can run. 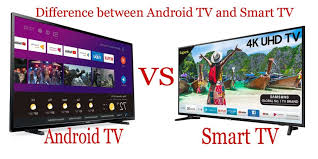 It also has Ram, Rom, Processor.  In the same way, Android-made TV has been named Smart TV.  Which can also be called Android Tv.

But what are the differences between Android TV and Smart Tv?  You will see this below.  Only then you will be able to understand well.  Otherwise it will be confusing.  Let us know in the details-

What is Smart TV?

You all know that many options have started coming in today’s LED TVs.  Many new options like USB PORT, HDTV PORT, HDMI PORT, etc. have come.  And most of all people know them too.  But do you know, apart from all these options, TV has started coming in like mobile phones.

In which we can run Android Apps, Download & install, internet Browser, Google Assistant, Google Map, etc.  With which we can run any number of apps like any Movie, Channel, News, YouTube etc.

You can watch anything online on this Smart TV anytime.  Because earlier people had to recharge to watch the channel on Dish.  But in today’s Smart TV, you can watch everything from Internet data for free.

In which features like Wifi, Bluetooth, Hotspot and Android Support have started coming.  Hence the name Smart TV.

Not all Smart Tv are made from Android.  Some TVs are made of Tizen Os.  Some are made from webOS.In which there are apps up to some limit. Like some of Samsung’s smart TVs.

Like Mobile Samsung Z1, Samsung Z2, Samsung Z4 etc.  By the way, some TVs from Samsung which are made by Tizen Os.  In which some are able to install apps up to the limit.  They are not Android TV.  Therefore, they cannot be called Android TV clean.

What is Android TV?

This Android TV also works like a Smart TV.  It is also called smart Tv.  But those TVs are made of Android Operating System.  The same will be called Smart Tv.  All types of TVs have come to Android TV.  But some company’s Smart TVs that are not made of Android.

So all the TVs with Android are there.  All apps can run in them.  Even apps installed, download can be done.  APK apps can also be installed.  Google Play store is like mobile.  Anyone can download apps from there.  You can even play games.

Internet connection and integrated smart systems like gesture detection, identification etc. can be called a smart TV in any TV.  Whereas, TV running on the Android operating system is called Android TV.

Therefore, it can be explained as a Quotes-

All Android TV is smart TV.  But not all Smart TVs are Android TVs.

You can make Android TV by putting an Android TV Box in an ordinary TV.  This is a small box.  Which can be connected via USB cable or HDMI cable to the TV.  And can run like a Smart TV.

In which all Android Apps can be installed.  Like- hotstar, Amazon Prime,Google Maps,Google Voice Assistant,Games, Facebook, WhatsApp,Google can all run.

Its price is easily available between Rs. 15000-30000.You can make Android TV by installing Android TV Box by purchasing Standard TV at a lower price.  Which is very good.  And can save your money.

So do you have Smart TV and Android TV Difference?  Must have understood that  Android TV is the best and best TV.

If you are going to buy Smart Television.  So remember, buy Android TV only.  Because we have explained it above.

If we have not corrected some information, then let us know by commenting below.  I hope you enjoy this information. So do 1 Share. Thank you

So this was the difference between smart tv and android tv.