You no longer need to spend too much to get out of an LED TV.  LG’s OLEDs are still very expensive, but QLED models are starting to have competitive prices.  We recently tested the Q80T, a 4K QLED TV from Samsung that is still above 5,000, but launches this year can cost less.

So today we bring you the analysis of TCL’s C715 TV, a QLED that can cost less than three thousand.  Is the difference too big?  Does her Android TV work well?  We answered that and much more in this review here.

To have a lower price, cuts need to be made.  And this is kind of true on the C715.  It is possible to see simpler finishes on this TV, as in the matte plastic back, but the metal finish on the edges and the chin brings elegance.

Below the screen, in addition to the hidden speakers, is a gray fabric module that accommodates power LEDs, infrared sensors and LEDs from the Google Assistant.  It’s like a Nest Mini flat under the TV.  The edges are even thin, even though the TV is more than 7 centimeters thick at the thickest part.  At the thinnest part, it’s an inch.The TV comes with a built-in Nest Mini

The feet are in some metal alloy and are light, V-shaped, and the cool thing is that you can fit in two places and adapt the feet to the furniture you have, and they make the TV very firm.  If you want to hang on the wall, there are standard VESA 200 holes, and it weighs 14 pounds.

All connections are turned sideways, making it easy to use.  On the left side there is only the power cable, and on the right are all connections, without any cable management system.

We have: a USB, a LAN, two HDMI, an RF for antenna or cable, digital audio, another HDMI, another USB, an AV that needs an adapter that comes in the box and one for headphones.  HDMI is 2.0, one of which is ARC for higher quality audio.

For wireless connections, dual band WiFi and Bluetooth 5.0.  Below them, a multifunctional button and another one to turn off the microphone.

How does AndroidTV work?

Between Samsung and TCL, a big difference is in the system of these SmartTVs.  While South Korean use Tizen, the Chinese bring AndroidTV on their televisions, just like Sony.  On the C715, it is in version 9 Pie.

Config a serious and practical interface, with an upper part that contains commands for searching, inputs, system accelerator (yes, we need to have this on an Android TV) and settings.

A great Android in your living room

Below, the first track gives access to some apps and the next tracks are apps chosen by you that show content that you have.  Music apps have a player at the beginning of the home.  AndroidTV is not intuitive like Tizen and WebOS, but it will be ideal for those who like to tinker with the system a lot.

Just like on an Android phone, you can change permissions, clear cache, access the developer area, among others.  So much about it makes it one of the slowest systems on SmartTVs, and navigating the interface takes time, and apps can take a while to open.

Like all 2020 TVs, this one has voice assistants.  The most complete of them is Google Assistant, an integral part of AndroidTV, and it has a function seen only on more expensive devices: it allows voice commands without using the control, and with that you can control the TV itself, open applications, and also  control smart home devices.

This is also the only TV we’ve tested so far that allows you to use the Assistant with the TV off, but you can only do this if you turn off the TV by voice command.  If you use the controller, it doesn’t work.

It also has Alexa, but only works with Alexa functions, which means you can’t use Alexa on your TV, but you can use your Alexa devices to control that TV.  However, it is strange, as it does not allow you to turn on the TV, just turn off or change the volume and others. 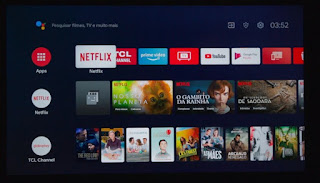 Finally, like a good AndroidTV, it has a built-in Chromecast, and it goes into the familiar interface if you stay awhile without touching the connected TV.  This makes it easy to mirror content, be it the screen, photos and videos on Androids with the Home app and even on iOS.

With a certain part of the offer of apps available for smartphones, AndroidTV is the system that has the largest offer of apps and games for a TV, it is an extensive library with practically everything you need, except AppleTV.  In addition to the expected, there are good things like Crunchyroll, Twitch, Tidal, Looke, Steam Link and others.

The number of games is huge close to other systems, but not all will work at a good speed.  Some can be played using the TV control, others require the use of gamepads via Bluetooth or USB.

The control and the MagiConnect app:

The control of the TV is peculiar, starting with the fact that it is Bluetooth.  I had no disconnection problems and it could be used further than normal, but its usability is not very good.  It doesn’t even have a mute button.

There are no buttons for media control, you must use the navigation buttons to enter the controls on the screen.  Some buttons are very similar in shape and relief, and the icon is printed in white on gray, making it difficult to use, looking at them or not.

Two buttons are special: the home button opens an app drawer and Ok opens a drop-down menu on top of an application with quick options, functions similar to those of Android for mobile.  There are shortcut buttons for Netflix and Globoplay, and a dedicated one for the Assistant.  For this, there is also a microphone in the control.

Although TCL has at least four apps for its TVs, only one is the correct one, and installing more than one gives problems for everyone.  The correct one is the MagiConnect Android TV Remote Control Roku TV TCL, a very small name.

The best functions are to emulate the keyboard and TV control on the cell phone screen, capture screen, display videos, music and images directly from the cell phone, perform screen sharing and even a function that automatically lowers the TV volume when you receive a cell phone.

The biggest question here is whether a three thousand reais QLED faces one that can cost twice as much.  And the answer is that if you are not very demanding, you can take the cheapest one without problems.  It is better than an ordinary LED and pleased in several ways.

A QLED is nothing more than an improved LED, with an extra layer.  After the light panel at the bottom of the screen, there is a layer of quantum dots, semiconductor particles, of nanometric size, which allow greater control of energy and light, bringing more brightness and more faithful colors to the images.

But it’s still an LED panel, so it can’t get as deep as an OLED.  Another advantage is the presence of micro-type local dimming.  This is when the TV is able to turn off parts of the LED panel behind it to improve details in dark scenes and not burst the light.

The micro type is not as good as the Full Array we have on more expensive models like Samsung’s, but it does mean that it varies the contrast in different areas of the screen and is better than a common LED panel.

It is a canvas with very strong colors, even bursting with red in some situations.  The brightness is strong, the contrast is interesting and the sharpness is good.  In this, the C715 owes nothing to more expensive QLED models.

When we place a solid color image on the screen, we can see spots at the edges.  Although this is not a good thing, more expensive OLED displays also have some kind of stain.

Upscaling content in Full HD and others is reasonable, and many artifacts can be seen.  Dynamic contrast is present and interesting, and the viewing angle leaves nothing to be desired.

Dolby Vision and HDR10 + are supported and they are activated when you play content with these technologies, such as on YouTube, Prime Video and Netflix, offering brighter colors and better image contrast.  The lowest price charges a price here: it is not 120Hz, it does not bring those more fluid images.

And speaking of fluidity, it makes it not very ideal for games.  There’s even a game mode available, but it doesn’t do much, and you’ll be playing at 60Hz.  In addition, HDMI connections are 2.0 and not 2.1, allowing for a lower data transmission rate.  Another present mode is the sport, and only, there is no other profile defined for the user.

In the sound, there is little to talk about.  There are no predefined profiles for audio and you need to set everything manually.  There are two 10W speakers each, and they even support Dolby Atmos and DTS-HD.

It is loud and clear enough at moderate volumes, without much fluctuation in volume and well adjusted to the audio of most films and TV shows.  If you want more depth and reality, it is better to buy a soundbar or home theater.

T7’s C715 was launched for 4 thousand reais but, as I said, it can be found for just under 3 thousand.  This causes his shortcomings near a more expensive model like a Samsung Q80T to be put aside, as the price is worth it and what matters is your choice.

It is not suitable for high performance games like the new PS5 or Xbox Series S or X consoles, nor for mirroring PCs. Its interface is not very fast and is more technical, with few predefined things.  It’s not 120Hz.  If these things don’t make a difference to you, it’s a potential choice.

The quality of its QLED screen practically touches Samsung, costing more than two thousand reais less, it has extras like integrated Chromecast, many applications, independent voice controls and thin edges, with a beautiful look.

If you need to save money and want better image quality, in addition to many apps, go for C715.  If you want something a little more neat and fast, you can invest in a Samsung model, like the Q60T.

So, do you think the C715 is worth the price?  Would you replace your home TV with a TCL QLED?  We want to know what you think, leave your comments below!

So this was the TCL C715 QLED Review.Plz share with it your friends.