TCL decided to be a kind of third way in the TV market, betting on two factors for this: price and operating system.  The Chinese giant recently announced its new line of TVs, and one of the models, the C715, has already been tested here.  It’s time for the P715, the brand’s entry model.

This 4K TV replaces the P8M, announced last year and which has already been tested by us, and which follows the same model as the previous TV.  Betting heavily on a partially revamped design and the ease of having Google TV as an operating system and the possibility of using voice controls without remote control, TCL wants to show that it is ready to compete with competitors like Samsung and LG, which have operating systems of their own. 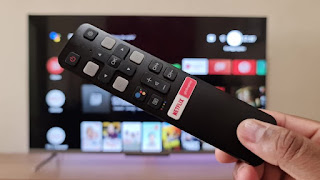 As in the previous generation, TCL emulates the design of its most advanced models in the entry-level TV and, for that, some cuts are necessary.  The back is basically identical to the P8M, made of plastic and, at the top, triangular relief and textured at the bottom.  The power inlets and cables are positioned sideways, which makes it easier to pass cables.

But the most noticeable change is at the front.  The P8M had pronounced plastic edges, which ended up showing that it was really an entry model, but that was solved with the P715.The edges are minimal, and made by a thin metal alloy, which gives an infinite screen feeling,  although the TV still has black side frames, as well as smartphones.

The sharpest edge is the bottom, but its construction is metallic, with a silver aspect, which gives a more premium look to the P715.The TCL logo is small and discreetly positioned in the central part, and made of chrome plastic and  bright.  Just below it, as we have already mentioned in the analysis of the C715, there is a kind of flattened Google Nest Mini that even has the typical lights of the Mountain View giant’s voice assistant.

The feet are made of metal alloy and are easy to install, requiring only a Philips wrench to screw in, and can be moved.  It is not a big base, as it happens in models of LG and Samsung, but even so they are firm and keep the TV in the place where the user chooses without vibration.  For those who want to hang on the wall, there are standard VESA 200 holes. The TV weighs 10kg.

There is no cable management here, and the division is simple.  The power cable is on the left and all other connections are allocated on the right.  This means, in practice, that if your intention is simply to put the TV to work, the cables will be apparent. 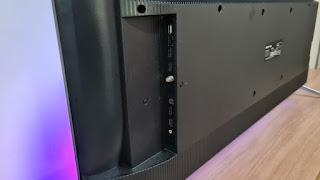 There are only two USB 2.0 ports, three HDMI ports, two of them 2.0 and one 1.4, optical cable input, 3.5mm audio input, LAN port for wired connection.  There are few inputs and, in practice, if you use a pay-TV decoder, a video game and a soundbar or blu-ray, you will no longer have HDMI inputs available.

On the other hand, there is Bluetooth, Wi-Fi 2.4GHz, which allows you to use other wireless devices, which ends up compensating for the few connections on the TV.  One of the HDMI ports is ARC, which provides higher audio quality.  There is also a key button to turn off the microphone, if users decide not to use the TV’s main attribute, which is the wired voice command.

We could go back to the C715 video and repeat the same as we already said, this is because TCL uses the same control in this model, which is also the same that equips the previous generation of the Chinese company.

It is a minimalist Bluetooth model that focuses on using the system over media control.  In practice, it is necessary to use the navigation buttons to enter the on-screen controls or to play and pause videos.  There is, for example, no dedicated mute button, meaning you lose a few seconds if you simply need to reset the TV volume.

On the other hand, there are dedicated buttons for Netflix and Globoplay, a decision that takes into account the consumption habit of us.  There is also a button dedicated to Google Assistant, Home, Back, one that emulates a virtual keyboard and another one of functions.  But most of the time you will use the directional and OK buttons.  They are powered by two toothpick batteries that are included in the box.  The construction of the control is made of matte plastic, with rubberized buttons with the same size and relief, and its dimensions are identical to the control of the Mi TV Stick, from Xiaomi, which also uses Android TV.

By now you should know that TCL works with Google’s operating system for its TVs.  TCL’s option is for a consolidated system and for the ease of using voice controls through the assistant of the American giant.  Its direct competitors are betting on Tizen and WebOS.

There is no big news here, because it is the same system that equips the other TVs from TCL and also from Sony, and also the Mi TV Stick.  It is a serious interface that favors practicality.  Visually, the upper part brings a search menu via Google Assistant, input options, system accelerator, settings menu and time. 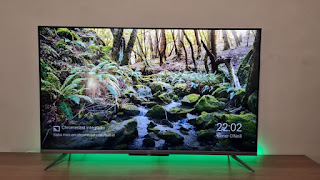 In the first row, the main applications appear in a rectangular format, and their display order can be customized, just pressing the OK button for a longer time to change their place and, below them, card options that display in more detail the  recommendations within different apps.  It is possible to enter developer mode and, just like on cell phones, make a series of customizations.  And it takes its toll on the slowness of the system, so there is even a system accelerator and, after a long use, you will need it.

The main novelty here is the use of voice controls without the need to press the remote control, and here is good and bad news.  The good thing is that it gives more practicality to use, and the bad thing is that when you start Google, all other devices will listen before the TV, which makes the experience a little uncomfortable.

There is another good news here, the addition of Work With Alexa.  And no, the competitor assistant is not integrated, but it is possible to turn the device on and off with the controls used for the smart home, something that was used a lot in our tests.  The third good news is the built-in Chromecast, which allows you to mirror content directly from your phone to your TV.

The offer of apps available on Google Play is large when compared to other operating systems, but limited when compared to what Google itself has to offer for cell phones.  1You can play on TV, in games that use the remote control or gamepads, which can be easily connected via Bluetooth.

For an entry-level model, TCL has managed to bring amazing sound and image quality, with stereo sound boosted with Dolby Audio and video quality certified with HDR 10+.  The colors are vibrant and vivid and there is a distinct upgrade when compared to the P8M.  Upscaling content in Full HD leaves little visible noise, ensuring a quality content consumption experience.

The sound is pleasant and the volume 20 – it is possible to reach 100 – already guarantees to hear in good volume, in the case of a small apartment room.  As we speak here of a TV, the sound privileges the tonal balance, although it is possible to adjust the sound according to the preferences in the settings, with the possibility of using already predefined profiles.

There are also good upgrades in brightness and contrast, which make your image quality interesting.  Blue and green tones are very pronounced.  For those who play, it has a refresh rate of only 60Hz, although there is a dedicated game mode.  Perhaps the owners of more advanced consoles will be more upset, but those who have previous models will play on it without major complaints.

The P715 shows that it is not necessary to spend a lot to have a 4K TV at home with a beautiful look and technologies present only in more expensive models.  In retail, the 50-inch version, which was the variant tested by TudoCelular, has an initial price of  $150  which puts it at an interesting level of cost-benefit.

But don’t expect a complete portfolio of features.  There are points of improvement in what is its main novelty, which is the use of voice commands without a microphone, which can be solved by a software update, and a higher update rate would be a welcome novelty for fans of gambling.  In addition, it is a good model within its proposal, which is the focus on low cost and on being the most popular 4K TV on the market.

Work with Alexa is an addition that is also in previous models, since it depends especially on software to run, and practically doubles the possibilities of control of the device by voice assistants.

Compared to its predecessor, the P8M that also passed through our bench, it represents an evolution, especially in design, but the quality of sound and image is similar, and both operate the same software version.

So this was the detailed TCL P715

Review and advantages and disadvantages of TCL P715.If you liked it than plz share it with your friend.