The Poco M3 was launched by Xiaomi in late November , being one of the few in the line that is not a renamed version of another product in the Redmi or Mi family.

With a different design, intermediate hardware and some cool extras, the device tries to be a good option in the range below 200 euros, being found in importers for around $ 60 if we disregard taxes.

But is it a good option? Let’s start to find out in this in-depth hands-on done in partnership with our HD Blog brothers.

The Poco M3 has a plastic body, but the back has a texture that imitates leather, something like we had in the distant Galaxy Note 3 . The exception is for the rectangular block where the cameras are located and the Poco logo, which is made of glass. The front part is made of Corning Gorila Glass 3, with a panel with drop notch and a very prominent chin. 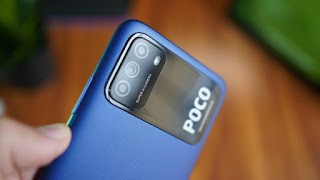 Despite the plastic body, it is very well built, and the choice of fake leather on the back helps to avoid fingerprints, in addition to giving the device a more premium look.

On its right side are the volume and power buttons, where we have the fingerprint reader. At the top we have sound output, P2 port for headphones and infrared for universal control of other electronics, in addition to a microphone. At the bottom we have the USB-C, plus a microphone and another sound output. Finally, on the left side is the drawer for two SIM chips and microSD card.

As it is an input device, we do not have an AMOLED panel or even high update rates, being used here a traditional 6.5 inch IPS LCD with Full HD resolution. It is not the brightest screen for outdoor use nor does it have perfect blacks, but it is enough to watch videos and play without worrying about poorly balanced colors or lack of details.

The main highlight is the audio, with stereo sound delivered through the upper and lower speakers. Because it uses independent outputs and not the same one used in calls, we have balanced sound in all bands, with well defined bass, mid and treble and high volume. It is really nice to see Xiaomi paying more attention to the audio of its intermediaries, and it would be great to see other companies doing the same.

The Poco M3 has basic intermediate hardware, using a Snapdragon 662 chip in conjunction with 4 GB of RAM and options of 64 or 128 GB of internal storage. It is the same as we have, for example, on the Moto G9 Power, and it should be enough for most users.

You will be able to run all games on the Play Store (although some with reduced graphics) and you won’t have to wait long for the apps to open, in addition to being able to browse social networks without feeling angry.

The Poco M3 comes with MIUI 12 and Android 10 from the factory, bringing all the cool features of the interface, such as floating windows, renewed shortcut center and new wallpapers. Like every Xiaomi device, it should receive a few more versions of the interface, but you can’t tell how many Android updates itself. 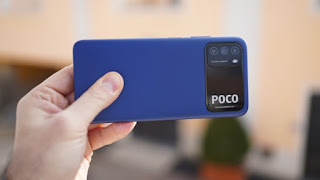 The good thing is that everything flows well and should stay that way for a while, being a good option for those who don’t want to worry about having to download third-party apps for everything.

The Poco M3 has three cameras at the rear, but the truth is that only one really matters: the main sensor of 48 megapixels. With it you will have great photos of 12 megapixels in favorable environment, but it is enough the light conditions fall for the quality to fall together. As if that weren’t enough, the camera app takes a long time to process the images, even taking a few seconds between each HDR capture.

Macro and depth cameras do the basics, and you probably won’t even notice that they are here. The same can be said about the 8 megapixel selfies camera, which takes reasonable photos by day and quite bad at night.

The 6,000mAh battery of the Poco M3 is enough for two days of moderate use without problems, and Xiaomi was quite generous in including a 22.5W charger in the box. The curious thing is that it only accepts recharging up to 18W, so you will need to wait about 3 hours for the battery to go from 0 to 100%.

Launched for the initial price of 150 euros in Europe, the Poco M3 is a pleasant surprise that should be successful among importers in Brazil. It has basic intermediary hardware and very simple cameras, it is true, but it has a great multimedia experience with stereo sound, a well-designed design and a fluid experience for almost any type of task, in addition to a battery for two days of free use.

We will still need to do our more in-depth tests, but in general we can say without fear of making mistakes that the Poco M3 is an interesting option if found in Brazil at around $60.